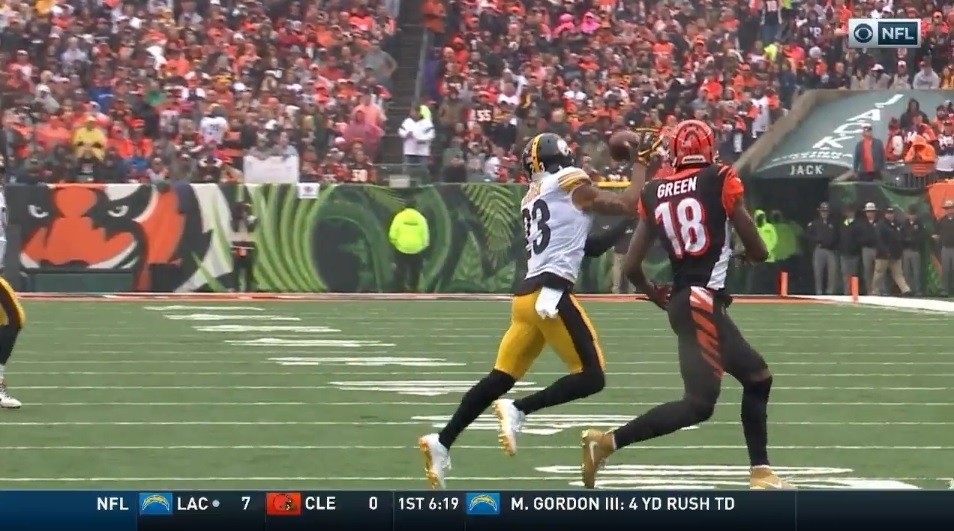 What a crazy game that was between the Pittsburgh Steelers and Cincinnati Bengals Sunday at Paul Brown Stadium.

This rivalry is never short on drama, but fortunately this time the drama came between the whistles as the game featured two late touchdowns that had the Bengals potentially winning before Ben Roethlisberger and Antonio Brown pulled off some more Ohio magic for the win.

Like I do every week, I’ll take a look at the top 5 plays from my perspective that helped change the game.

After an ill-advised challenge by Mike Tomlin on a third-down catch by Ryan Switzer was clearly a yard short of a first down, the Steelers called on embattled punter Jordan Berry to punt the football away from his own 19 yard line (more like his own 9 yard line after the snap).

Berry responded in a massive way with a 69-yard punt that completely flipped the field, even if he did respond by outkicking his coverage by 15 yards. In a situation like that where he booms the ball well inside the 20-yard line on the opposite side of the field, outkicking the coverage doesn’t matter.

Imagine if Alex Erickson calls fair catch there. That’s an 78-yard punt. Mother of God. Now, the Bengals were called for an illegal block in the back, so it backed the Bengals up to their own 9 yard line. But the original punt was spectacular even without the added help of the penalty.

On 2nd and 10 at their own 25 yard line and trailing 7-0, James Conner, with the aid of a huge block from Maurkice Pouncey, busted off a 26-yard run around right end that seemed to spark the Steelers offense on the day.

It as perfectly blocked for Conner, but his vision and speed around the end popped the top off of the play. He tried to hurdle Jesse Bates at the end of the run in an ill-advised decision, but it was the spark the Steelers needed.

Later on in the drive, JuJu Smith-Schuster made a highlight-reel catch over Darqueze Dennard for 22 yards, setting the Steelers up at the 1 yard line, allowing Conner to bowl his way into the end zone, tying the game at 7-7.

I’m sure Joe Haden would like this play back.

Trailing AJ Green around for much of the game, Haden reads this play well on a crossing route from right to left intended for Green. Haden undercuts the route and has a clean look at a potential interception, but the ball bounces right off of his chest, resulting in an incompletion.

If Haden catches it, there’s a good chance he takes it back for a pick-6. Alas, the Bengals got a second chance and didn’t waste it, converting a third and 10 before scoring on a 2-yard touchdown catch by Tyler Boyd in the right front corner of the end zone.

What a play this was by the Steelers.

On the game-winning drive, Ben Roethlisberger and Antonio Brown saw the all-out pressure the Bengals were going to bring, leaving the middle of the field wide open.

Roethlisberger checked to his hot route – a quick slant for Brown – and fired a strike in stride to Brown, who outran the Bengals defense for the game-winning score from 31 yards out. Brown benefited from a potential offensive pass interference from Justin Hunter, but the non-call was a minor part in a great call from Roethlisberger and Brown, resulting in a win.

But how isn’t it the number one play? Well…

It sure looked like Conner scored on this play, racing around right end again for an explosive play. Bates again tripped him up, but Conner twisted into the end zone. It looked like he was able to stay off the ground long enough in his twist to get the nose of the football over the goal line before his shoulder hit the ground.

Instead of challenging a potential touchdown in favor of the Steelers, Tomlin elected to just take three cracks at the end zone from the 1 yard line. You know what happened.

The stop by the Bengals resulted in the Steelers holding onto their second challenge and settling for a field goal, making it a 3-point game instead of a 7-point game.

If Tomlin does challenge it, there’s a good chance it’s turned into a touchdown, making it a 21-14 game. Add on Chris Boswell’s field goal later on in the game and its 24-14, putting the game largely out of reach.

That decision not to challenge and settle for three points in the end came back to haunt them as the Bengals took a 21-20 lead with 1:18 left in the game, but Roethlisberger and Brown bailed out the coaching staff and the defense.