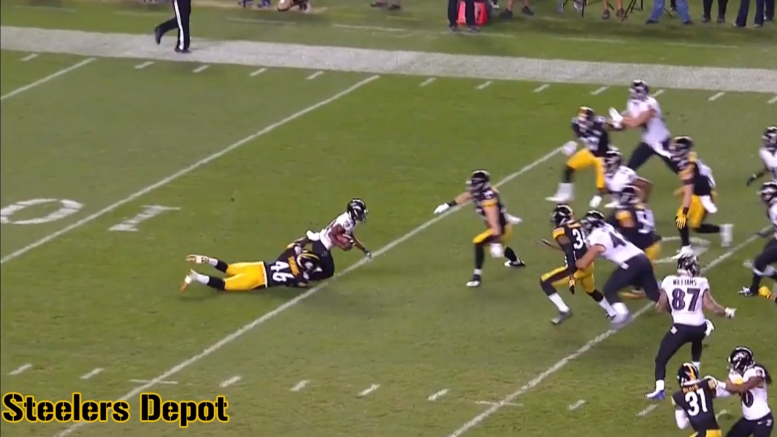 As Pittsburgh Steelers rookie inside linebacker Matthew Thomas appears set to make his defensive debut tomorrow against the Atlanta Falcons, let’s remind ourselves that at this point of his career his primary task is to contribute on special teams.

To date, he has had some level of participation on three of the four primary special teams units, those being kickoff coverage and returns, and punt coverage as well. For the latter, he has even been used as a gunner, a role that he may continue tomorrow with Darrius Heyward-Bey likely not playing.

I’ve tracked down an example of a play from each of the above-mentioned units from Sunday’s game against the Baltimore Ravens to give some insight into his performance on special teams, which, to the chagrin of many, is an important job that is only recognized when something goes horribly wrong.

Thomas was a part of the kick coverage unit following the Steelers’ first field goal. Taking Mike Hilton’s spot on this occasion on the far (coverage) right, he actually had an easy time of it because the Ravens’ coverage left him completely unaccounted for. Perhaps they saw a linebacker on the wing and decided that he would not have the speed to influence a return inside, but he tackled Tim White in the open field at the 16-yard line.

That was his only snap on the kick coverage unit of the game, the other snaps at his spot taken by Coty Sensabaugh and then, for some reason, Artie Burns for the final kickoff. But he saw a number of snaps on the kickoff return unit.

This was the best of his snaps there, the opening kickoff of the second half, with Ryan Switzer returned to the 34-yard line from a yard deep in the end zone. Second from the return-unit left here, he struggled initially to find somebody to block, but ultimately managed to get in somebody’s way. Not knowing what the returning is doing behind you can complicate things a bit, I might add.

Thomas was already in the gunner role to start the second half. As the right gunner, Jordan Berry’s punt was angled to the left sideline for a four-yard return. He helped to induce a fair catch on a short 33-yard punt on his second rep, but Heyward-Bey was back for the fourth punt of the game before leaving with an injury. Berry’s fifth and final punt was his best, traveling 47 yards where it was fair caught at the eight.

Thomas was the rightside gunner for that one, and was able to get the jammer’s hips turned to the sideline before pulling inside. He was right in the returner’s face by the time the ball arrived. By my very rough approximation, it also seemed to be one of Berry’s better hangtimes of about five seconds.