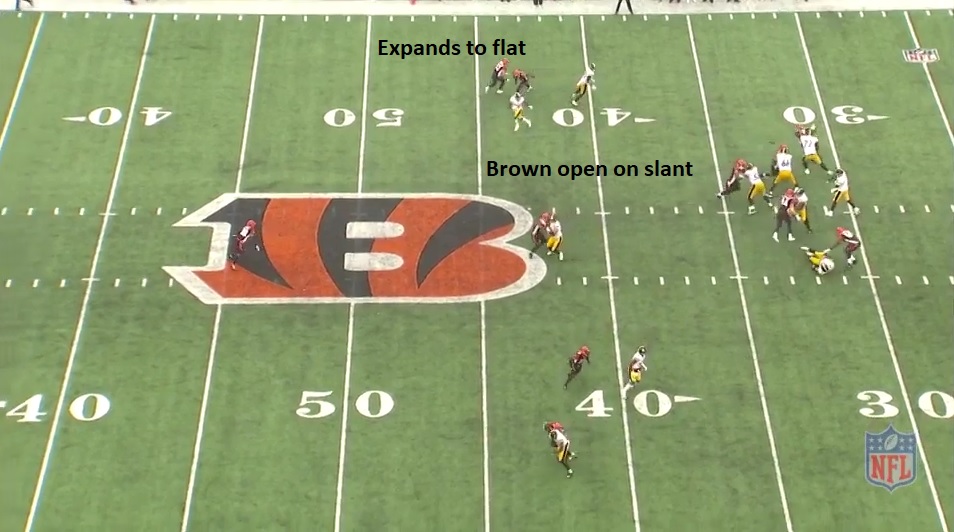 The NFL is complicated. Playbooks are Encyclopedia thick, most verbiage sounds like a foreign language, and sleeping in your office seemingly a requirement for any coordinator. But it doesn’t always have to be. The Pittsburgh Steelers’ solution to getting the ball into Antonio Brown’s hands is a simple one. They’re using the easiest concept in football to understand.

It’s a slant/flat combination route, sometimes referred to as a “Dragon” route because of the drag (slant) and out (flat) combination. A design meant to get the ball out of the quarterback’s hand quick, a three step drop, with a simple half-field read. 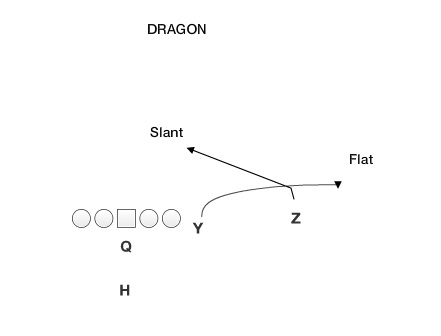 That read is typically the linebacker or slot player. If he expands to the flat, throw the slant. If he sits, throw the flat. It best works against man coverage because of the natural “pick” it creates but it can beat zone too.

Coming off the Baltimore Ravens game, a loss with the offense stuck in the mud and Brown pretty much a non-factor sans one touchdown catch, Randy Fichtner has seemed to get back to basics. Find what’s quick, efficient, and lets Brown get the ball in space and on the move. A moving target is always better than a stationary one in the NFL because it allows for run after the catch.

Since the Atlanta Falcons game two weeks ago, they’ve run this slant/flat combination to a sizable completion at least three times. I want to start with last week though, when the Steelers hit it for their biggest gain, a 48 yard catch and run that led to the Steelers to a 4th quarter field goal.

Empty set 3×2. Brown and James Conner split out to the top. Brown is running the slant, Conner to the flat. The Bengals are running Cover 1, a great concept to beat this coverage. AB wins cleanly off the line against Dre Kirkpatrick’s press coverage, having a receiver who can get off the line is so key because timing is everything. The safety covering Conner expands as he heads to the flat, leaving Brown open over the middle, the corner now trailing.

Even with Ben Roethlisberger’s throw not being the best, a little behind and Brown needs to slow up for it, AB has created space off the line and away he goes. Especially when the safety, in this case rookie Jessie Bates (welcome to the NFL, kid) takes a bad angle. 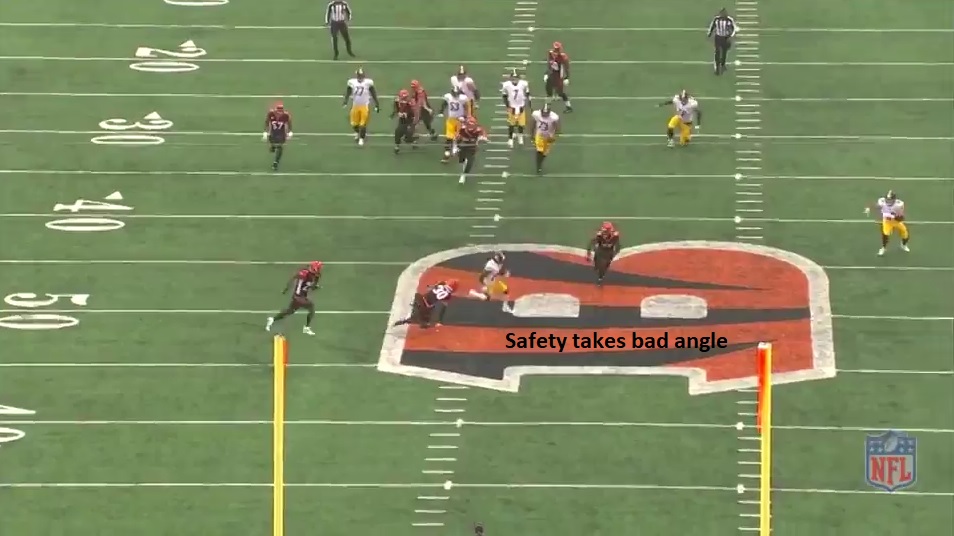 That’s the risk of Cover 1. Not a lot of support if the throw connects, especially when Brown has the ball in his hands. It’s a 48 yard gain.

But it’s a good way to get him going in general, even if they aren’t all 40+ yard gains. The Steelers are running the same thing, with the tight end in the flat this time and Brown on the slant versus the Falcons. Zone coverage here, the linebacker still expanding on the flat, and it opens up just enough of a window for Ben to fit the slant to Brown.

Similar idea here, though Brown ends up sitting down on his slant against zone, finding the open window rather than keep running and head into the linebacker’s spot. It’s another completion and first down.

Of course, none of this is brand new. The Steelers have done the same in the past and this is a concept in literally every other playbook in football (and college, and high school, and probably your local Pee Wee league). Here are the Steelers running it to set up Chris Boswell’s game-winning field goal against the Colts last season. Brown breaking off his slant, Le’Veon Bell in the flat to expand the LB, and though this one gets a little messy, it still ends up going for a huge catch and run.

Point is, when the Steelers needed a big play, they’ve kept it simple. Slant/flat, a quick read, give your playmakers the ball with room to run. With how much attention Brown gets, especially on anything vertical, this is a great way to beat the bracket and double coverage and get your best weapon the football.