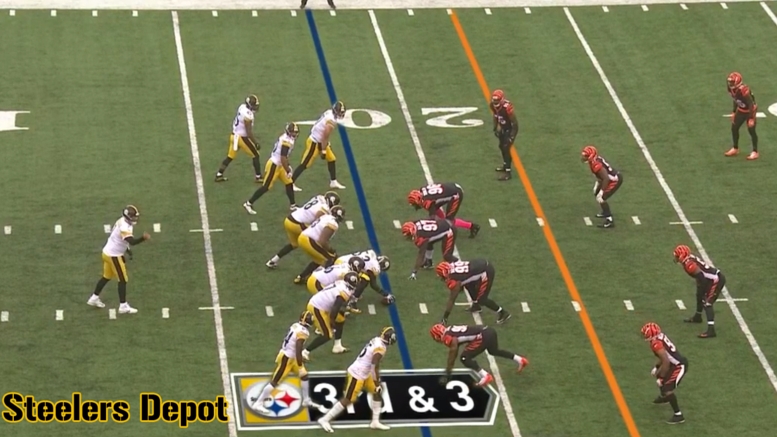 One of the interesting things that I saw from the Pittsburgh Steelers on Sunday before last was what seemed to be their blatant disregard for the expectations of running a certain sort of play based on the personnel package that they were in. in particular, they spent a lot of time with only one or two wide receivers on the field in that game, yet put the ball in the air often on those occasions.

Even on the first drive of the game, the offense showed a three-tight end package that they used on third and two and then split into an empty set. Vance McDonald and Jesse James all bunched together with Antonio Brown and James Conner in a group on the left side, Xavier Grimble left alone to the right. The three in front of McDonald all immediately fanned out from the line of scrimmage to give him space to make a short reception for the conversion.

Later in the same quarter, on the second play of their second drive out of second and eight, they brought out the 22 look. While Conner stayed in the backfield this time, fullback Roosevelt Nix slide into the right slot underneath Grimble, with Brown to their right. James was isolated on the near side. This play never developed as intended and Ben Roethlisberger ultimately forced a ball to his fullback in double coverage for an incompletion.

Still in the first, the three-receiver set returned, only this time in a more obvious run look. Of course it was a passing play, without even utilizing play action. Grimble was the lone tight end off the right side of the line, and Roethlisberger connected with him between two defenders for 13 yards.

into the third quarter, they showed the 22 look again on third and three and once again went empty. In a look similar to the first play, only with Nix in rather than McDonald, it was this time the isolated Grimble who was the target on a wide-open flat route with the four targets on the opposite side of the field drawing the attention. The third-year tight end would march upfield for a 22-yard gain.

And they would stay in run-heavy looks for most of the drive, Nix spreading out wide on three consecutive plays, including the next. On this, with Brown in the right slot, a nickel blitz left him open for a short slant that went for 13 yards.

I cannot recall in any other game seeing the Steelers throw the ball so much out of run-heavy personnel groupings before. I will be keeping an eye on this to see if it is a trend that continues into the second half of the season.