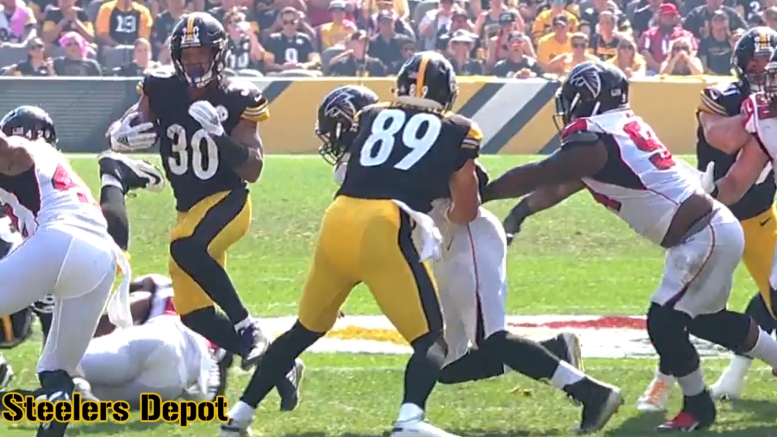 Last week was the quietest for Vance McDonald and Jesse James, a legitimately dangerous duo for most of the season. But while they didn’t make much of an impact on the box score, three catches for 26 yards in a 34 point offensive output, both guys still played a key role in the run game.

It’s no secret the Pittsburgh Steelers have run power, with the backside guard pulling, for years now and to a high degree of success. So it’s no surprise when I say power has been their best run scheme in 2018. All but one of James Conner’s rushing TDs, the exception being the goal line dive last weekend, have come off of it. And against the Atlanta Falcons, they used it early and often.

There’s two key elements to running that scheme successfully. The front side and back side. The backside is a little obvious. The guard pulling needs to clear a path for the back, usually kicking out the end man on the line of scrimmage but he has to react to what the defense is doing. Sometimes that means turning and climbing to the second level or logging the EMOL if he tries to dip inside.

But the front side is really key too. Have to get a strong double-team on the playside defensive linemen and get key down blocks to create a push and lane for the back to cut up through (his key is the inside hip of the puller). If they can’t drive down, or allow penetration, it’ll force the guard to take a wider path, the play will hit slower, and it’s probably going nowhere.

And in Pittsburgh, that means the tight ends are getting involved and often, down blocking defensive linemen, especially a Falcons’ team that runs an even, 4-3 front.

Like this 30 yard gain by Conner early in the game. Key block by David DeCastro and big credit to Conner for making the scraping LB miss in the hole (like I said earlier in the week, he created plenty of yards). But you also have James and McDonald sealing down the LB and DE, again, creating that movement to open a lane for the back to motor through.

Same thing here. More of a pin/pull scheme with DeCastro and Maurkice Pouncey pulling. But again, James and McDonald asked to down block along the frontside. Can’t get pushed back, can’t lose the block, or the run isn’t going anywhere, no matter what the backside is doing.

It’s a common theme for all these plays. Here’s Conner’s second touchdown, again, off of power. Also, great lead blocking from Roosevelt Nix, who bounced back after a tough game against Tampa Bay a couple weeks ago.

And one final look, this time just from McDonald. Key 3rd and 1 pickup in the fourth quarter. Not a down block here but McDonald follows the flow of the linebacker, creates the lane, and Conner hits it for a good gain and first down.

These aren’t Hall of Fame level blocks. And that’s ok – they don’t have to be. They’re functional blocks and they’re asked to make these plays look routine against some tough competition, defensive ends who are used to getting blocked by tackles. And they’re key to the success of these runs.