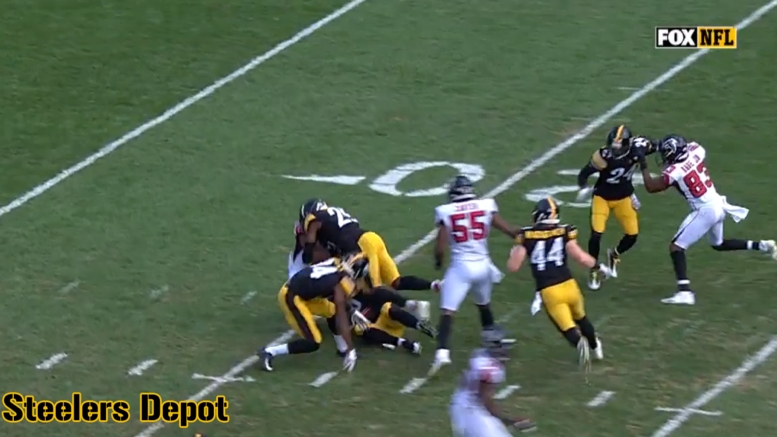 You may have recently seen me mention that the Pittsburgh Steelers, while he has been out of his primary duty as a full-time defensive starter, have stuck cornerback Artie Burns back on kick coverage duty, at least on a temporary basis.

Burns has not seen work on kick coverage since his rookie season, though he did continue to be used in that role even after he entered the starting lineup full-time in the second half of the season. To have taken him out at that point would have been a disruption of the cohesion of the unit, which could lead to big plays.

On Sunday, however, the team needed a body to put out there with Darrius Heyward-Bey injured. The wide receiver looks likely to miss another game, so there’s a good chance Burns will continue to be used there.

While he is playing in Heyward-Bey’s spot, he is not being used in the same role. Heyward-Bey’s assignment on most kickoffs is to used his speed to press the edge of the return and to force it inside, where the coverage can tighten formation. Burns has been used more as a last line of defense, hanging back instead of aggressively getting down field or directly pursuing the returner.

That doesn’t mean he doesn’t get in on any plays, however; in fact, he registered the tackle on the opening kickoff. Only two of the Steelers half-dozen or so kickoffs were actually returned, so there wasn’t much to look at, so it’s a good thing he at least got this one in.

As you can see, while he initially lines up closest to the sideline, he drifts behind the rest of the unit and folds inside. This first kickoff demonstrates just when such an assignment proves useful, the unit making the stop at the 23-yard line.

The other kickoff that was returned came late in the third quarter, with Tyler Matakevich the tackler of record. There is really nothing particularly remarkable to note here about Burns’ assignment on the play, in large part because the coverage was solid once again, bringing the return down at the 21, so he never had to get involved.

As just one more example, here is one of the last kickoffs in the game, which went for a touchback, this one from the opposite angle. You can get a different perspective of the design of the return here, with the stunt mirrored on both sides.

This is not ordinarily what they do when Heyward-Bey is in the game, so this seems to be an adjustment that Danny Smith decided to make without him in there. In case you still don’t understand his importance, his absence resulted in the team changing their coverage scheme.