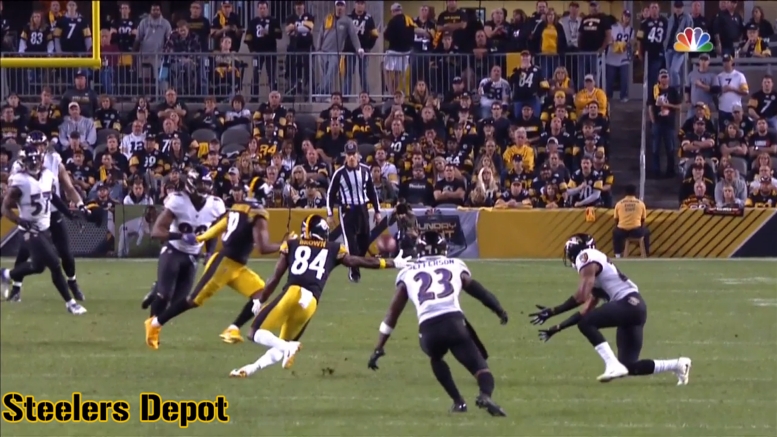 Pittsburgh Steelers quarterback Ben Roethlisberger targeted wide receiver Antonio Brown 11 times on Sunday, and they were only able to connect on five occasions. This has been a theme throughout the first quarter of the season so far, yet there have only been a couple of instances in which there are passes aimed his way that he could have caught but did not, and it would have taken spectacular effort to bring those in.

Sunday’s game is a pretty good example of the sort of targets Brown has dealt with so far this year. Take the first incompletion, on second and four, the second play of the Steelers’ opening drive about five minutes into the game. Roethlisberger’s pass landed behind him and pretty much at his feet. The quarterback has had too many of these ‘whiffs’ in general so far this year.

In the middle of the second quarter, the two looked to connect on a deep pass from about 20 yards out. While Marlon Humphrey actually had good coverage on this play, Roethlisberger’s throw ultimately lands out of bounds, pretty much uncatchable.

A number of the misfires were reserved for the second half, with some notable ones coming in the third quarter. About midway through the period, on third and four, Roethlisberger misses Brown badly on an out route that lands harmlessly out of bounds, a disconnect serious enough that you have to wonder if he was expecting a different route here.

Late in the quarter, it was another deep shot that misses the mark between the two. On a third-and-12 play, Roethlisberger actually had Brown open, but once again badly shoots wide, throwing behind Brown to the point that he can barely even get the fingertips of his trailing hand on the football.

The final miscue never even got to the wide receiver. In the fourth quarter, once again on third down, the quarterback either didn’t see linebacker Anthony Levine or was hoping to skate a pass by him, but the reserve linebacker showed good reaction time to move to his left and bat the pass down.

Had he not been there, that could have gone for a big play. As it was, Levine would respond later in the quarter with a big play of his own when the quarterback definitely didn’t see him, picking the pass off and pretty much putting to bed any hopes of a Steelers victory. And if they hope to get another one, then Roethlisberger’s going to have to start giving Brown more to work with. Period.