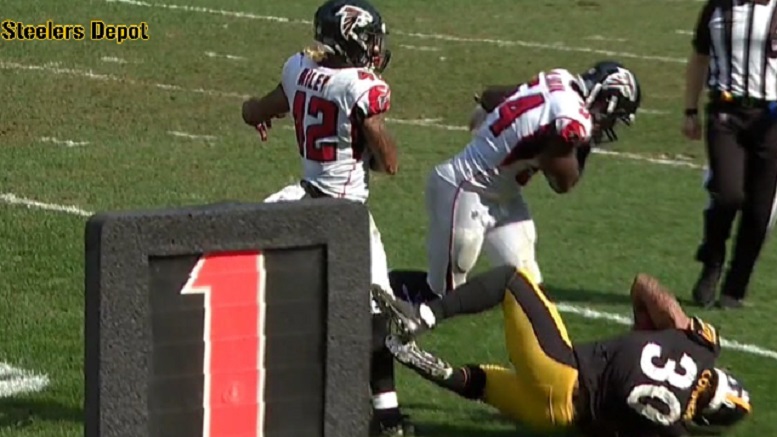 Pittsburgh Steelers outside linebacker T.J. Watt wasn’t the only player to be issued a fine for a deemed illegal action in Sunday’s games against the Atlanta Falcons.

According to Vaughn McClure of ESPN.com, Falcons rookie linebacker Foye Oluokun was also fined $10,026 this past week for his unnecessary roughness penalty on Steelers running back James Conner in the third quarter of the Sunday game at Heinz Field in Pittsburgh.

The infraction in question happened with 1:53 left in the third quarter and at the end of a 1st and goal run attempt by Conner from the Falcons 4-yard-line. After Conner had his forward progress stopped for no gain on a run to the left side by Falcons linebackers Oluokun and Duke Riley, the former slammed the Steelers running back to the ground long after the referees had blown their whistles.

Oluokun was then penalized half the distance to the goal-line for unnecessary roughness and Conner scored a 2-yard touchdown on the very next play.

It’s quite comical that Oluokun’s fine was half what Watt’s was even though his actions against Conner were twice as bad the “hit” Falcons quarterback Matt Ryan took below the knee from the Steelers outside linebacker.