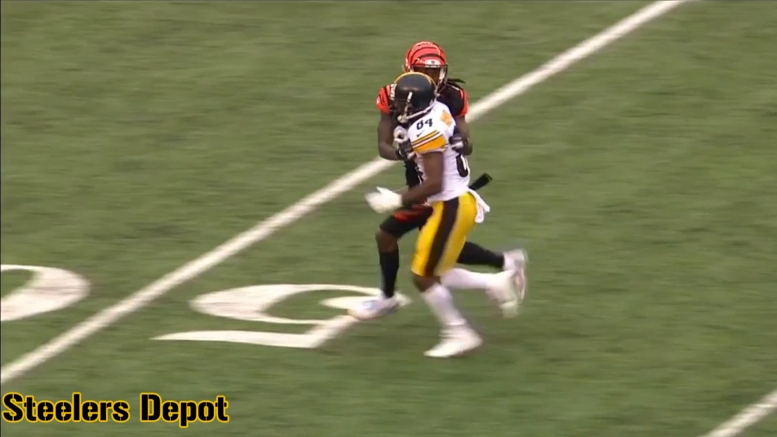 One of the critical moments of yesterday’s victory over the Cincinnati Bengals by the Pittsburgh Steelers was officially a play that never happened. With the offense facing a third and 10 from their own 41-yard line, quarterback Ben Roethlisberger in actuality threw an incomplete pass to JuJu Smith-Schuster, but you won’t find it in the stat line of either player, or for the game.

That is because the play was wiped out by a defensive holding call that happened away from the play, with veteran Bengals cornerback Dre Kirkpatrick working against wide receiver Antonio Brown, who would go on to score the game’s winning points two plays later.

Only according to Kirkpatrick, he shouldn’t have been penalized. And he doesn’t care who knows it.

As ESPN reporter Katherine Terrell reported, Kirkpatrick told the media after the game when asked about his holding penalty that gave the Steelers a free third-down conversion, that the call was “trash”.

Bengals CB Dre Kirkpatrick was called for a critical holding penalty on 3rd-and-10 late in the game. This is how he feels about it: Trash. I don’t even care if they fine me. Trash. Trash call….C’mon, man. Critical situation, man. They gotta be right on with that.”

It is unclear if Kirkpatrick is appealing more to the severity of the infraction or the importance of the moment in arguing that the call should not have been made, but he is wrong in either case, of course. Thanks to Dave Bryan’s post-game gif work, we can clearly see that the cornerback’s ‘trash’ holding call was right on the money, and his comments are quite a treasure.

Following last week’s victory over the Atlanta Falcons, Head Coach Mike Tomlin, a member of the Competition Committee, called some of the calls made in that 41-17 game “a joke” and added that he was “pissed off” about it. Later in the week, he said that he stood by those remarks.

The league stood by and fined him $25,000 for criticizing the officials. Kirkpatrick very likely stands to be fined as well for his comments about a critical call, and a very specific call, at a crucial moment of the game.

Like he said, however, he doesn’t care. He makes plenty of millions to be able to afford to be forced to give some thousands of dollars to charity. It’s just amusing that he could actually believe that what he did was not a textbook defensive holding penalty.

The Bengals have, of course, been quite a source of amusement on and off for the Steelers and their fans over the past several years. That has been especially the case inside of Paul Brown Stadium, where we get to witness the well-oiled machine that is the Escaloser—so-dubbed by Pittsburgh faithful—transporting dejected fans from the highest seats in the stadium to the lowest depths of human misery.

And the beautiful thing is that it can be ridden at any time. It’s simply up to the Bengals’ ‘faithful’ in the stands when they become convinced that their team has lost and is no longer worth sitting there to watch the rest of the game.

Unfortunately for them, they had to sit through that holding call and all of 59:50 of the game before the result was finally in hand yesterday.