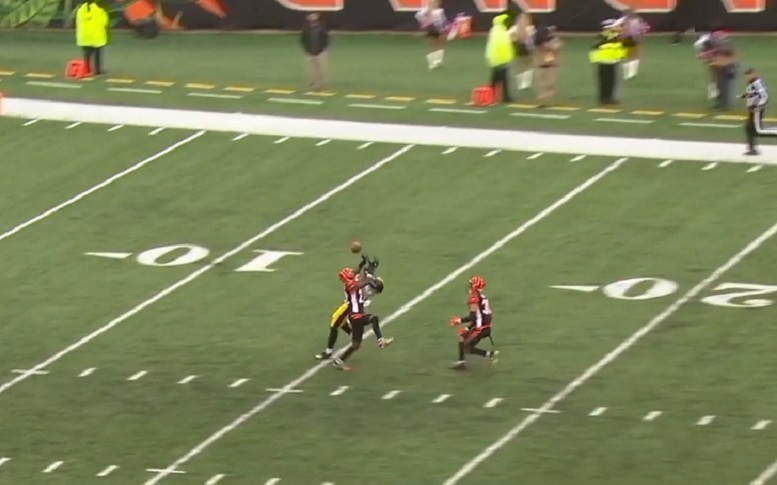 As the Pittsburgh Steelers enter their bye week it seems like several fans of the team are concerned about the slow start that rookie wide receiver James Washington has had. That’s certainly understandable as his 5 receptions for 49 yards and a touchdown pales in comparison to the 15 receptions for 192 yards and two touchdowns that fellow wide receiver JuJu Smith-Schuster registered in the first six games of his 2017 rookie season. With all this recent concerned chatter about Washington, I thought I would break down for everyone how he was used this past Sunday against the Cincinnati Bengals and what we should likely expect out of this year’s second-round selection the remainder of the season.

For starters, Washington played all of 16 offensive snaps Sunday against the Bengals with 14 of those being designed pass plays. Washington was targeted just one time during Sunday’s game against the Bengals and it was a deep throw to him down the middle of the field from quarterback Ben Roethlisberger after he had been flushed out of the pocket to his right. That deep attempt came 6:33 left in the fourth quarter and Washington’s route on that play, a 12-yard curl from the left side of the field, he was forced to turn into a deep go as part of the original play breaking down. Roethlisberger even looked like he wanted to go to Washington originally on that play before pulling the football down and escaping out to his right. The deep throw to Washington, however, was also a little under-thrown and almost intercepted. It certainly wasn’t a catchable pass.

So now that we’ve covered Washington’s one and only target in Sunday’s game, what else was the rookie wide receiver asked to do assignment wise? Quite honestly, not a lot.

Below is a play-by-play contextualization of all 14 pass plays that Washington was on the field for Sunday in Cincinnati. This table of data also includes the route that Washington ran on the play and each is linked to an all-22 shot of the play for you to see.

In summation, Washington was primarily asked to run either go-routes or curl routes, both short and long, when he was on the field. In all honesty, perhaps only 4 or 5 of these plays was he really a legitimate option to be thrown the football due to play design. In short, he was used more as decoy than anything else.

Perhaps the most telling aspect about Washington’s playing time on Sunday, or lack thereof, was the fact that he wasn’t on the field for the game-winning drive and not on the field for any red zone plays as fellow wide receiver Justin Hunter was allowed to play those offensive snaps when at least three wide receivers were used.

Moving forward past the bye week, I suspect Washington might be asked to do a little more than he was asked to do in the team’s first six regular season games. Keep in mind that he’s only been targeted 13 times in total so far this season and of the 8 passes thrown his direction he didn’t catch, six of them were deep down the field.

Washington isn’t likely to get more than just two or three targets moving forward into his rookie season and at least half of those are going to be on deep go-routes down the sideline. As soon as he notches his first reception on one of those kinds of throws, perhaps the coaching staff, and more importantly Roethlisberger, will start trusting him a little more.

In summation, while Washington’s current stats entering the bye week are probably a little lower than many expected them to be through six games, I don’t think there’s any reason to panic just yet with the Oklahoma State product. Roethlisberger has quite a few great options to throw to this season and Washington is way down on that list as far as priority and trust goes. I’ll make sure to check back in on his progress over the course of the next four or five games and provide another contextualization at that point.