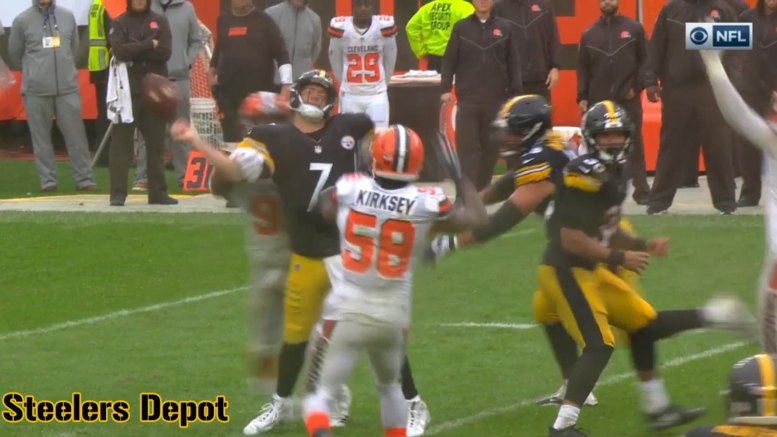 The Pittsburgh Steelers had no intention of leaving the Cleveland Browns in the season opener without coming out of their stadium with a victory. As it turned out, neither team did, but while some Browns fans and played celebrated the tie as the first result in which they didn’t lose in over a year, for the Steelers and their fans, it felt more like a loss.

Yet it easily could have been either. Just considering the overtime period alone, the Steelers had a chance to wrap things up with a 42-yard field goal for the win from Chris Boswell, who was a Pro Bowler just last season. At the end of the game, the Browns had a chance to win with a field goal before T.J. Watt blocked it to secure a tie.

“It’s not a loss but it feels like one”, quarterback Ben Roethlisberger recalled of that opening game. “It’s AFC North football, it’s in Cleveland, it’s the first game of the year, so you want to come out scoring, and we turned the ball over too many times and still had a chance to win it”.

Speaking of which, Roethlisberger threw three of his six interceptions on the season in that game, and he was also sacked twice on takedowns that resulted in fumbles, accounting for five turnovers all by his lonesome. That included an interception in the red zone on their opening possession.

“We’re looking forward to this game, as I’m sure they are as well”, the quarterback said of Sunday’s rematch, with either side looking to take the series advantage. “It’s a fight in the AFC North right now. We want to perform at home in front of our fans”.

Roethlisberger has become all too familiar with how much talent the Browns have stacked on the defensive side of the ball, including a number of recent first-round draft choices such as Denzel Ward, Jabrill Peppers, and especially Myles Garrett, whom he called a “really really good football player”. He “gets after the quarterback, makes it hard to throw, makes it hard to run, very disruptive”, the Steelers quarterback said of Garrett. “Obviously we saw in the first game in that secondary, they turn the ball over. They catch the ball when it comes their way. This is a big challenge for us. We said going into that first game that this is going to be one of the better defenses that we face all year and I still stand by that”.

The Browns lead the league with 20 takeaways, the next closest team having 17. Still, they are allowing an average of 25.3 points per game, with ranks 18th. They gave up 45 points to the Oakland Raiders and 38 to the Los Angeles Chargers. They have held only one opponent under 17 points, and just two below 21 points.