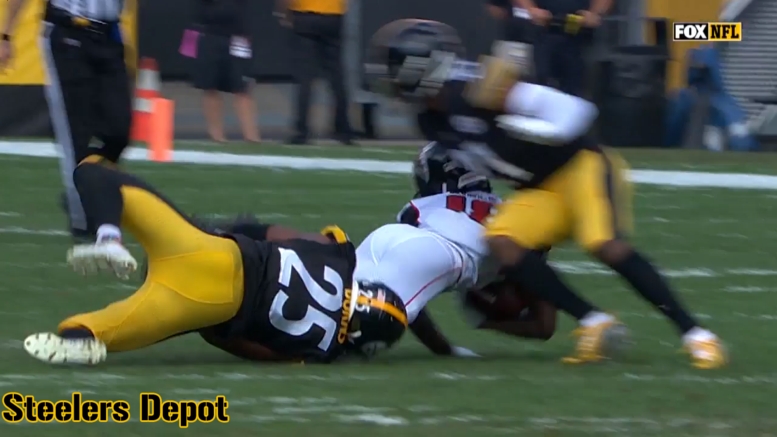 Five games into his third season, Pittsburgh Steelers cornerback Artie Burns has spent more time as a rotational player than as a full-time starter. He started the first two games and played essentially every snap, as one would expect of a starting outside cornerback, but after struggling in those two games, Head Coach Mike Tomlin made the decision to give Coty Sensabaugh the opportunity to play there as well.

He started in Week Three and played the majority of the snaps, though Burns was back as the ‘starter’ a week later, and has been receiving slightly more playing time than his veteran teammate. According to Jacob Klinger, Burns said that the rotation continues in practice, but he offered, “we’ll see once game time comes”.

Earlier in the week, Tomlin said that practice performances this week would serve as his guide with respect to how he chooses to deploy players at the right outside cornerback position this week. Burns has seemed to settle down over the course of the past two weeks, for what it’s worth.

But he could still head into the bye week having yet to regain his full-time starting job.  A few weeks back, heading into the third game, Tomlin said that the plan was for the rotation to continue until somebody stepped up and took ownership of the job.

Personnel changes most often come during a bye week, though. It gives players and coaches an extended adjustment period. That is when Sean Davis began rotating at strong safety as a rookie, for example. That was also    when Burns was first installed as a full-time starter in 2016 as well.

Could he reclaim his spot coming out of the bye week this year, or perhaps even sooner?

While he has been previously giving up a perfect passer rating in coverage, Burns has only given up five receptions for 57 yards over the course of the past two weeks, and with no touchdowns allowed. He nearly had an interception as well, and he has not missed any tackles, either.

In the meantime, the Steelers have put Burns back on kick coverage duty, something that he hasn’t seen since his rookie season, but that’s just something that happens when you lose your starting job and still get a helmet. Otherwise he would potentially be on the bench in street clothes.