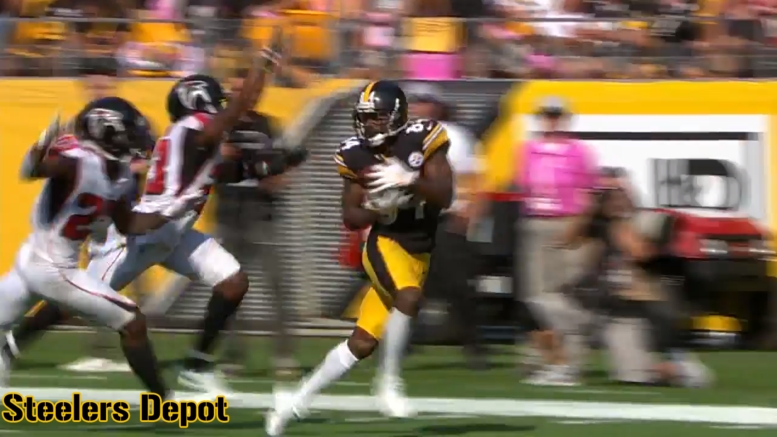 While some of Antonio Brown’s statistics have been hard to come by for him so far this season—namely in terms of receiving yardage, finally breaking out for a 100-yard game yesterday—there is one number in particular that has not been an issue at all: scoring.

The ninth-year Pittsburgh Steelers superstar already has five touchdowns through the team’s first five games, which is tied for the second-most receiving scores in the NFL so far this season, behind only Calvin Ridley, who just set a rookie record for the most in his first four games with six.

Brown had two touchdowns from Ben Roethlisberger yesterday. The 63rd of his career came on an out route in the red zone from nine yards out. The 64th receiving touchdown of his career was on a go route for 47 yards.

And it also put him in sole possession for second place on the Steelers’ all-time receiving touchdowns list, surpassing Hall of Famer and minority team owner John Stallworth. The only Steelers player with more receiving touchdowns is now Hines Ward, who caught 85 during his career from 1998 to 2011.

His 64 touchdowns moves him from 73rd all-time (in a tie with A.J. Green among several others) to a four-way tie for 64th all-time, including Plaxico Burress. His next will move him to 57. Among active players, however, he still has a way to go.

While he is temporarily in sole possession of seventh place with Green having not scored yesterday, sixth place is Jimmy Graham at 70 touchdowns, who did not score yesterday. Jordy Nelson is right ahead of him with 72 touchdowns (including one yesterday), and it starts to get out of reach after that (Rob Gronkowski at 77, Brandon Marshall at 83, Antonio Gates and Larry Fitzgerald both over 100).

Brown averages about 10 touchdowns per season, but with the way he is heading, I’m going to estimate 12 right now. If he reaches 12, he will finish with 71 career receiving touchdowns by the end of this season, which would put him in a tie for 40th place all-time.

He still has a long way to go historically speaking, in other words. There are 10 players who have 100 receiving touchdowns or more, for example, and it will be at least a few more seasons after this one before Brown can even realistically hope to reach that.

Perhaps Ward’s 85 touchdowns can be the goal he sets his sights on for the next two seasons. He would need 21 over the course of his next 27 regular-season games to get there, reaching 85 touchdowns in his first 10 seasons.

According to Pro Football Reference, only six players in NFL history have ever reached 85 receiving touchdowns in their first 10 seasons. The first five are in the Hall of Fame, and the other will be (Fitzgerald). Jerry Rice had 131…