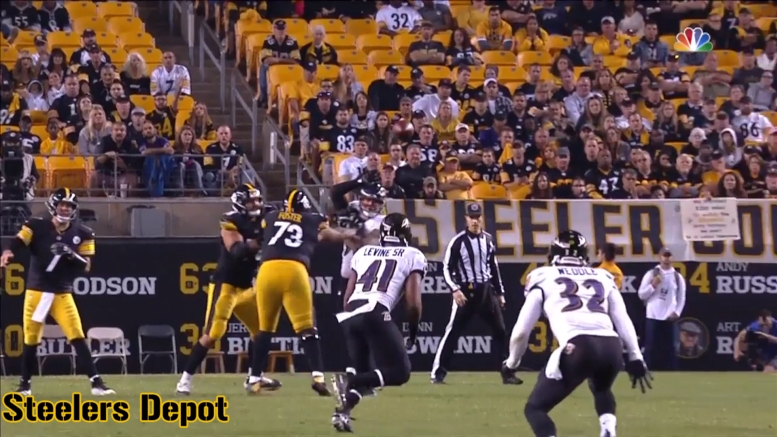 It’s time—in fact, pact time—for the first installment of our look at the Pittsburgh Steelers’ turnover-worthy throws so far through the first quarter of the season. While we’ve played five games, I’m going to take a look at the throws from the first four. Given that Ben Roethlisberger has been the only one throwing passes, he’s the only one featured here.

As a reminder, a turnover-worthy throw is pretty much how it sounds. It’s a throw that by all justification could have resulted in a turnover—an interception—had a defender been able to make the play. Sometimes those are easy plays to make. Sometimes they’re a bit harder. Where to draw the line is subjective, so this is my subjective interpretation.

I have Roethlisberger down for four turnover-worthy throws in the season opener against the Cleveland Browns, only two of which were interceptions. The other two came very late in the game. The first turnover-worthy throw of the season was also the first turnover. I’m sure you recall it. The forced ball to Antonio Brown that Denzel Ward dove in front of for the interception, Roethlisberger failing to account for him. I don’t think this requires an explanation.

Then there was the errant deep ball in the middle of the second quarter looking for Brown once again. It’s obvious that the two were not on the same page on this play, but the spot of the ball doesn’t appear to be a logical placement for Brown’s positioning relative to Damarious Randall. So it’s turnover-worthy.

Two more came late in the game, including this one looking for Jesse James. This ball sailed on Roethlisberger, and was nearly scooped up by Jabrill Peppers. You can see the ball change trajectory when it hits the safety.

On the final play of regulation, Roethlisberger heaved a long ball looking for Justin Hunter. Linebacker Joe Schobert was slow-footed to adjust to the ball but ultimately let it hit off of his hands. This clearly could have been intercepted, but given the scenario—time almost out—it’s understandable.

He did not throw more than two turnover-worthy passes in any other week of the first quarter, but he did have at least one in each. Against the Kansas City Chiefs, he—and you’ll notice this is a theme—tried to force a ball into double coverage to Brown, with Kyle Fuller nearly making the outstretched snag. This was certainly more than a pass defensed. This one very well could have been intercepted, even if it would have been an impressive play.

Roethlisberger had one turnover-worthy throw against the Tampa Bay Buccaneers as well, looking for JuJu Smith-Schuster in the first quarter. This one was intercepted with the defensive back jumping the route from over the top.

The Baltimore Ravens game featured two turnover-worthy throws directed at Anthony Levine. One he picked off, the other he should have, both in the fourth quarter. On the first, Roethlisberger simply did not account for him in zone coverage as he easily drifted in front of the pass.

In the final minute-plus of the game, the quarterback nearly did the same thing, only the play was mirrored in the other direction, and this time Levine dropped the ball.

While I’ll reserve the Atlanta Falcons game for the midpoint of the season, I can offer you a preview: Roethlisberger had three turnover-worthy throws in that one, by my reckoning. That’s 11 on the season through five games, slightly more than two per game. For what it’s worth, Pro Football Focus only credits him with eight, which is still the second-most in the NFL, but they are evidently a bit more conservative—or less observant—than I am. I would argue that at least eight of these are unquestionable though.