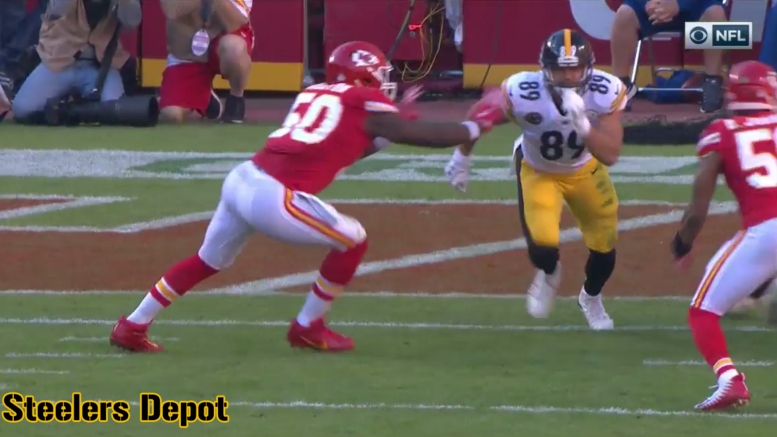 The Pittsburgh Steelers have long-term plans for tight end Vance McDonald, believing that he has the talent to be a very successful legitimate number one player at his position. Unfortunately, that plan has also required a lot of patience, and resistance to temptation.

That hasn’t been any easier on the player than it has been on the team. McDonald’s injuries have surely been highly frustrating for the sixth-year veteran. This most recent injury was probably especially so, entering his first full offseason with the Steelers, and then missing virtually all of training camp anyway, plus the season opener to boot.

The team was very cautious in working him back from his foot injury. In the hopes of eliminating the potential for a setback, they held him out of practice for the remainder of the offseason, and then shut him down in the week leading up to the season opener after going through a limited practice.

“The plan was just all about health,” McDonald said yesterday. “Just trying to get successful weeks stacked on top of each other just to build. Get out of the game healthy to be able to go into this week same approach as last week and just build on it”.

And both sides are hopeful to start stacking now. He played on Sunday and came out of the game fully healthy, entering this week of practice with every intention of having no limitations. He played a few dozen snaps in his first game of the year, catching three passes for 26 yards.

Not that the team’s other tight end, Jesse James, has not been producing in the meantime. In his fourth season, he already has eight receptions for 198 yards and a touchdown, on pace to blow away his previous career-highs in every category.

Though it’s too early to talk seriously about pace, he is averaging four receptions for 99 yards and half a touchdown per game, which would work out to 64 receptions for 1584 yards and eight touchdowns. Now, obviously he’s not going to come close to 1584 yards, but even a quarter of that would be a career-best.

As for McDonald, he expects to ramp up his playing time week by week until he is likely close to an every-down player, though is James continues to play as he has so far this year, he may have to split more snaps than might otherwise have been expected.

What will this season have in store for McDonald, and vice versa? Unfortunately it’s impossible to say for a player who has had such a difficult time staying on the field. But he is there now, and everybody is just hoping that he can stay there for as long as possible.