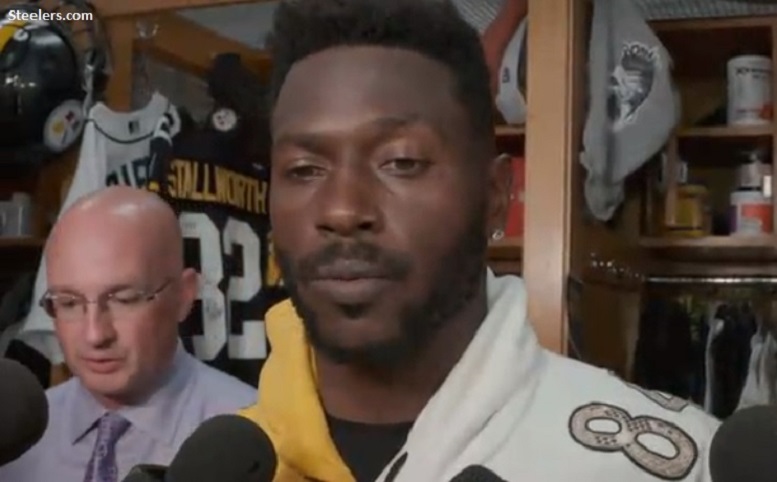 Pittsburgh Steelers wide receiver Antonio Brown met the media on Thursday and below is a partial transcript of the questions he was asked along with the answers he gave so that you can have the full context.

Brown: “I am passionate about winning.” pic.twitter.com/kYMCPAveet

RE: Why weren’t you around on Monday?

AB: Personal reasons. Obviously the coach knew where I was at. We talked. Between me and him.

RE: Can you tell us about your conversation with him?

AB: It was personal. It’s internal between the team and me and coach.

RE: How do you feel about the results of that talk?

AB: It’s all about just playing football. The distractions we just got to stay away from. I’m here to play football and in that regard, we got to stay focused in the midst of it.

RE: Why so mad after the fourth touchdown?

AB: But we losing the game, or we getting beat by 40, we haven’t won a game yet. For me, as a Steeler, that’s unacceptable. I’m not on the sideline begging for the ball or making statements that you guys make, I’m pissed off we’re losing, we suck.

RE: But James Conner just tied the game.

AB: Nah, you guys make assumptions about my emotions. You guys don’t know me at all, you guys just write what you think is gonna get hits. Between me and you, everyone in that locker room knows what I stand for, knows what I’m about. I’m committed to this program, this organization, I’m fully here. I go to work everyday, go about my business and I don’t take it for granted. My business is winning here. I come here to win and to be a winner, you’re damn right I’m pissed off.

RE: But you weren’t in the locker room on Sunday to ask you about that.

AB: Yeah, you’ve got to write stories about everything. I’m pissed off we lost the games. If you guys want to talk to me, let’s talk, I’m right here. I’m not hiding from none of you. I don’t hide from no one, I’m from Liberty City.

RE: What about Sunday, though, you weren’t available. Why did you leave so early?

AB: I was available. I left early. I’m pissed off we lost. We didn’t win the game. You guys frustrated? I thought you guys around here supposed to be writing about winning. The culture should be winning. That’s all that matters. That’s our business is winning. When we’re not winning, I’m pissed off. I’m passionate about winning. I signed up to win. I work extremely hard putting in 20 hours a day of my life and my body away from my family to win. And when we don’t, yeah, I’m pissed off because I take it serious. A lot of time goes into this, a lot of hard work and effort. So yeah, I am pissed off.

RE: What is lacking from getting the wins?

AB: Got to find a way to win. No excuse. We can point the finger at anyone, we’ve got to look within ourselves and see how we can be the difference to make us win.

RE: Is that why you tweeted, trade me?

AB: No, it was a guy who used to work here, a PR guy who actually picked me up to even attend and to even be here to take a personal shot at me. But obviously I don’t want to be traded. I’m still grateful to put on my uniform, grateful to be a part of this organization. I don’t take that for granted. Obviously it was a stupid remark online. I just got to stay away from online with the distractions and letting people get me out of my character. But it’s just sad for a guy who worked here numerous years to say what he thinks. Obviously it’s a team game. My success does depend on Roethlisberger, the offensive line and all the other receivers doing that job, but as a competitor, man, I take it serious. This is not just a game to me and cashing checks. Money don’t matter. I look at my assignments and my performance, that means a lot to me and when I go home, I weigh in on that, my family weighs in on that. So to me, guys who just think they could just disrespect me, it’s just out of order.

RE: But to clarify, when you said it was a stupid remark online, you’re talking about yourself? That you shouldn’t have tweeted it?

RE: Are going to try to stay off Twitter now?

RE: Do you think it was justified that you were disciplined for missing Monday’s team meeting?

AB: I never could go against the program or what these guys think is right for me. Obviously, I’m a player and I just got to follow suit.

RE: Do you consider yourself a leader on this football team, a leader by example?

AB: Absolutely I think I lead by example. I come to work every day. You guys can make a statement that I’m a diva, but you asked these guys, I put my heart on the line every day. Regardless of how I’m feeling, I’m out there, I’m given 100 percent effort. That’s what I’m about.

RE: Do you have to watch what you do in light of losing whether you get upset on the sideline?

RE: Will you be on the field for the first snap Monday night?

AB: Why wouldn’t I be? You guys don’t want to see me in my jersey?

RE: How do you plan on taking being pissed off out on Tampa Monday night?

AB: We got to find a way to win. Monday night is another opportunity to erase the doubt and to erase the misfortunant thoughts about us as a team.

RE: Were you so mad about the way things were going on Sunday, that’s what kept you away Monday?

AB: I’ll just told you I had a personal issue. If you want me to tell you that, then that’s another story for you to say, well, what’s wrong with me? Right?

RE: Did you let Mike Tomlin know Monday?

AB: Yeah, I let him know. You just can’t not show up. What do you guys think, you just don’t show up? I mean, we have a job, my job is to let everyone know what’s going on with me when I’m not here.

RE: Were you fined by Tomlin?

AB: I told you guys it was a personal, internal. You have to ask the coach.

RE: Did you apologize to your teammates?

RE: Do you feel that you’re misunderstood in the way the media portrays you?

AB: It don’t matter, my business is winning I can’t get caught up in the media side of things. Obviously I’m a good bait for you guys so you guys keep putting that bait out there.

RE: Still having fun on the field?

AB: Absolutely, it’s fun. I don’t take this game for granted, it’s a blessing to play it. Obviously I’m grateful to play for this organization, I don’t take it for granted, but losing is not fun. When you lose, it’s not fun. You know, you got people that will say everything about you. You got the hate, you got the write ups, you got the bad looks. I’m a guy that takes this serious. When I go home I evaluate my performance, I evaluate what I’m doing and you got to make this game fun.

RE: Are you all about the stats?