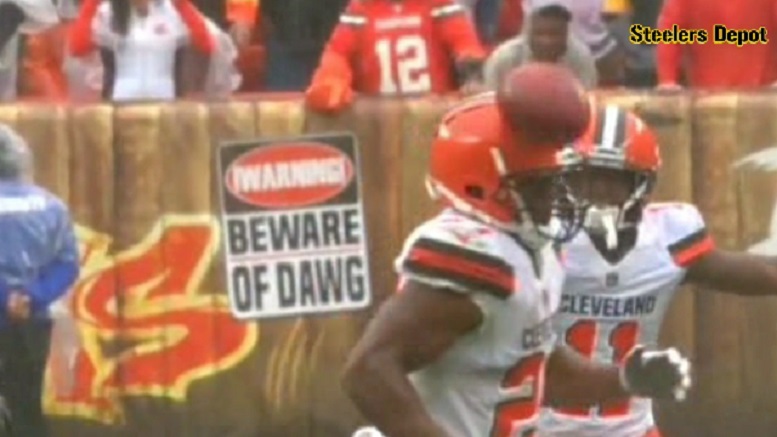 It certainly appeared as though the Pittsburgh Steelers had at least one call go against them in their Sunday game against the Cleveland Browns. I’m of course referring to the Steelers fourth quarter punt that seemingly contacted the helmet of Browns rookie running back Nick Chubb after first bouncing off the field.

The seemingly recoverable football was quickly corralled by Steelers safety Sean Davis but the referees on the field ruled it as him merely downing the football. Steelers head coach Mike Tomlin then unsuccessfully challenged that ruling on the field.

Tuesday during his weekly press conference, Tomlin was asked if he received an explanation from the referees after that unsuccessful challenge.

“I’m not asking for explanations,” Tomlin said. “The way that I look at it is it’s an opportunity for us to grow because sometimes things happen in football that are outside your control and sometimes you feel like you’ve been wronged.”

While Tomlin seemingly took the high road at the beginning of his response to that question, he still let the media know he thought it should’ve been the Steelers ball and that the referees essentially got it wrong.

“All of us saw the ball hit that guy,” Tomlin said. “Their returner, [Jabrill] Peppers, saw the ball hit that guy because why else would a returner insert himself into that scrum trying to recover the ball unless he was sure the ball hit the guy. So, that’s the approach that we’re taking as we move forward. Once a decision is made, there’s nothing else that you can do about it, you’ve got to move on. You’ll miss the next opportunity to win the game in some way if you spend time crying over spilled milk. We had other opportunities to secure that game after that. So, that’s where our focus is in terms of using that as a teachable moment.”

Tomlin, however, also took one last shot at the NFL officials and Al Riveron, the Senior Vice President of Officiating of the National Football League.

“Why that play was not corrected, I have no idea,” Tomlin said. “Ask New York. They felt comfortable talking about the hit on Ben [Roethlisberger] was inappropriately officiated. I’d be interested to see their comments regarding that play. I haven’t taken time to ask because I’m busy preparing for Kansas City.”

Tomlin chiding Riveron for him saying on Monday that the unnecessary roughness penalty that was called on Browns defensive end Myles Garrett earlier in Sunday’s game was the wrong call was well-deserved, in my honest opinion. Now that Tomlin has essentially asked Riveron to comment on Sunday’s punt recovery challenge, it will be interesting to see if he does prior to Week 2 getting underway Thursday night.

One could probably argue that the ruling on the field wasn’t ultimately overturned during the review process because of the replays not being conclusive enough when it came to showing the football actually contacting Chubb’s helmet. If New York only had the television angle replays showed during the game to go on, below is the best that I can show you in relation to the video being zoomed and slowed down.

It certainly looks like the football contacted Chubb’s helmet but is that conclusive enough? Perhaps Riveron will let us know in the coming days, but obviously it wasn’t, and it just doesn’t really matter at this point.