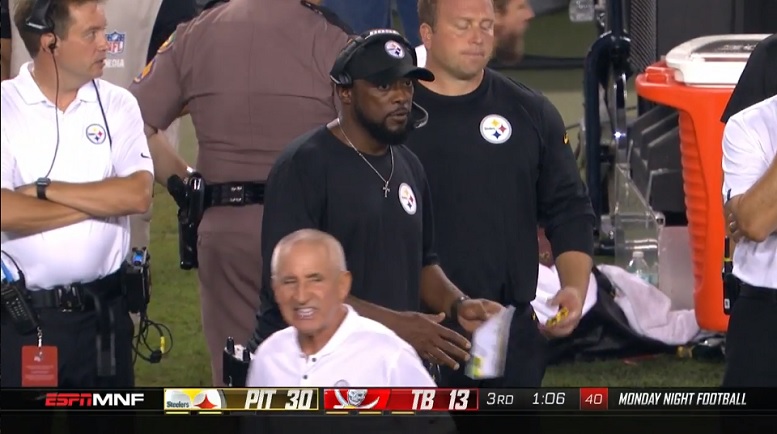 Even though the Pittsburgh Steelers brought in two free agent punters in for tryouts last week, they ultimately chose against making a change at the position and thus Jordan Berry was permitted to continue with his duties Monday night against the Tampa Bay Buccaneers. After the game was over, Steelers head coach Mike Tomlin was asked about Berry’s performance Monday night and if he thought the punter effectively bounced back after facing the prospects of losing his job last week.

“Keep watching,” Tomlin said. “You know, I like some of the things that happened last night, but we got to build that day by day.”

I’m not totally sure how to read that quote from Tomlin but it does sound like he was generally happy with Berry’s punting Monday night against the Buccaneers.

In case you didn’t follow the punting closely Monday night, Berry’s five boots averaged 45.6 yards with two being inside the 20-yard-line and one other being a touchback. His net average Monday night was 41.6 yards, but he did have a long punt of 56 yards, which unfortunately was the one that resulted in a touchback.

One of Berry’s two punts that landed inside the Buccaneers 20-yard-line was downed at the Tampa 2 and two plays later the Steelers defense registered a pick-6. Additionally, one of Berry’s other efforts was downed at the Buccaneers 1 but that one was wiped out by an illegal shift penalty on wide receiver Darrius Heyward-Bey, who also was issued an unsportsmanlike conduct penalty after arguing the original call against him. The re-punt by Berry was his 56-yard touchback.

While we’re also on the subject of Monday night punts wiped out by penalties, Berry had another one of those in the fourth quarter and thankfully that was the case in that instance as his 46-yard fourth quarter boot with 8:57 left on the clock was returned for a touchdown by Buccaneers wide receiver DeSean Jackson before being called back because of a holding penalty. That punt, by the way, was kicked right to Jackson in the middle of the field and whether he was told to do so I do not know.

The Steelers next game will be Sunday night at Heinz Field against the Baltimore Ravens and with the team now on a short week, it would make sense for them to keep Berry for at least another week. Additionally, Berry’s inconsistent punting is seemingly way down on the priority list of things that need to be fixed as the Steelers also need to stop committing so many penalties moving forward and especially on special teams.

“I do acknowledge that we got to play better and smarter in some of those instances, particularly in special teams,” Tomlin said Tuesday regarding the 13 times his team was penalized during the Monday night game. “From a field position standpoint, it was significant.”

Also, on the priority list of Steelers broken things that need immediate repairing is kicker Chris Boswell, who like Berry, has been very inconsistent in the team’s first three games of the 2018 regular season. After missing yet another field goal and another extra point attempt Monday night, Tomlin was asked if his confidence in the Steelers usually reliable kicker had wavered any and he said that it hadn’t. Tomlin was asked roughly the same question about his culvert condense in Boswell on Tuesday.

“No, he’s a heck of a kicker, he’s our kicker,” Tomlin said Tuesday when asked if he’s currently concerned about Boswell. “I am concerned about the ball not going in, but I’m not concerned about him. Got a great deal of confidence in him. He’ll get it turned around. I’ll acknowledge that it hasn’t been where we needed to be thus far.”