In the Monday Night Football battle between the Pittsburgh Steelers, winless over the first two weeks of the season, and the Tampa Bay Buccaneers, with a seemingly unstoppable passing attack, Pittsburgh’s defense slowed Tampa Bay just enough to escape with a win.  Steelers cornerback Mike Hilton played a significant role, logging his first INT of the season on a tipped ball from inside linebacker Jon Bostic as well as recovering a fumble forced by fellow cornerback Artie Burns, which was followed shortly by an Antonio Brown touchdown.

Hilton’s night was cut short, however, when he sustained a right elbow injury in the second half.  After the game, head coach Mike Tomlin referred to it as a “significant elbow injury”.  Hilton himself called it a hyperextension, qualifying it as “mild” and confirmed that he would be ready to play the following Sunday night (they always say that, of course, and I’m sure they believe it).  Hilton appeared to get his right arm caught while tackling Buccaneers wide receiver Adam Humphries early in the 4th quarter.  This is probably the best video, which still provides only a limited view of the reported hyperextension:

Losing Hilton for extended time, or even just the upcoming game against the Steelers divisional rival Baltimore Ravens, could leave the Steelers defense limited.  The previously undrafted nickel cornerback has been a solid contributor and has no obvious replacement who can provide the same level of play.  It is safe to assume that Hilton had an MRI when he returned home, although no further information has been provided by the team.  According to Jacob Klinger of pennlive.com, Hilton was seen in the South Side facility yesterday, first in a sling, and then later without one.  When asked if he would practice today, he didn’t rule it out:

Mike Hilton is wearing a sling on his right arm. He left Monday’s game with an elbow injury.

Asked if he would practice tomorrow – now no longer wearing the sling – Mike Hilton said “Probably, I don’t know.”

So what is the best and worst case scenario for Hilton?  Let’s take a quick spin to the chalkboard for basic elbow anatomy first.

The elbow is a joint between the humerus (the upper arm bone) and the radius and ulna, the two bones of the forearm.  This joint is a dynamic hinge, allowing simple flexion and extension as well as rotation, as the forearm turns upward (supination) or down (pronation).  The three bones are connected by ligaments, and the muscles of the arm have various attachments with tendons:

There are actually 3 separate joints in the elbow:

The ligaments serve to align to bones and provide stability.

With a hyperextension injury, the elbow is straightened beyond the normal range of motion.  This occurs most commonly in contact sports or when landing on an outstretched arm to break a fall.  The result is sudden force on tendons and ligaments which can result in a tear.

Dr. David Chao, an orthopedic surgeon who is remarkably accurate at estimating injuries based on video review, had some concerns regarding Hilton:

By limited video, worry for distal biceps tendon tear for #MikeHilton @steelers. Hope not as that would mean surgery and IR with small chance to be designated for return very late season. https://t.co/owU929gXi8

The elbow extension test is a quick and fairly accurate way to assess for a fracture.  If the arm can be fully extended without pain with the shoulder at 90 degrees (arm straight out), a fracture is unlikely.  This quick analysis was evaluated in over 2000 patients and published in the British Medical Journal.  The test was found to be 96.8% sensitive (positive test when there is a fracture) and 98.4% specific (no fracture with a negative test).  This test was most likely done by the trainers immediately.

In more extreme hyperextension injuries, a posterior dislocation of the elbow can occur: 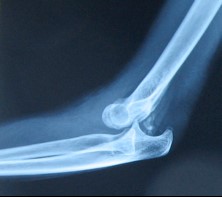 A dislocation is almost always accompanied by ligament injuries:

Most hyperextension injuries without dislocation are treated the same as most sprains (RICE).  With more serious ligament injuries that result in joint instability, surgery is required, but this is not common in NFL players.  Recovery, as with all sprains, varies depending on the amount of swelling and pain and can vary from 1-4 weeks.

OK, time for some speculation!

I think it’s unlikely that Hilton sustained a dislocation of his elbow joint.  He seemed able to move his arm as soon as he stood up after the tackle.  There were also multiple reports that Hilton was trying to convince his coach to let him back in the game, suggesting that the injury was not severe.  Based on what was reported yesterday from the Steelers training facility, he probably doesn’t have a fracture either.  While a cast isn’t always necessary depending on the type of fracture and the stability of the elbow joint, I doubt he would have been out of his sling so quickly and allowed to progress from immobilizing the elbow.  It’s possible that when the trainers evaluated Hilton, they taped his elbow to provide support and allow for some range of motion.  Here is an example of taping for an elbow hyperextension injury.  Whatever happened during his visit, Hilton shedding his sling so quickly is a very good sign.

All signs point to this being a minor injury, as Hilton predicted.  If that is the case, he could very well play Sunday night when the Steelers take on the Ravens and that would be very good news indeed.  It’s too soon to be sure, of course.  If Hilton practices today and doesn’t experience any setbacks, we can hope to see him on the field for the Week 4 matchup.