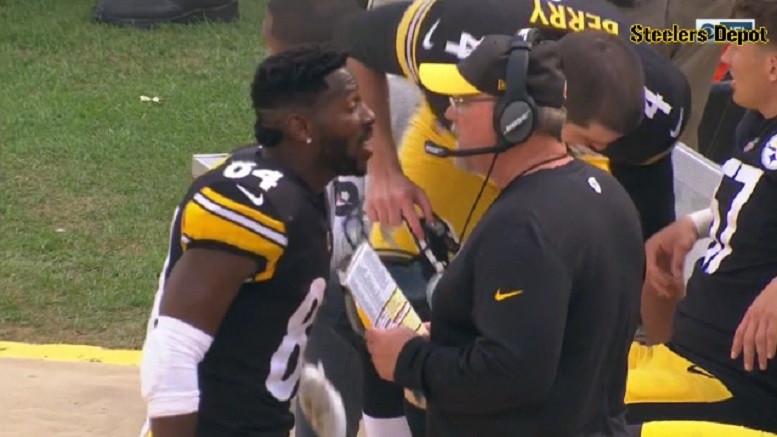 It doesn’t appear as the Pittsburgh Steelers wide receiver Antonio Brown had a very good week.

While Brown was targeted a whopping 17 times during the Steelers Sunday home loss to the Kansas City Chiefs, he only caught 9 of them for 67 yards. For whatever reason, Brown was extremely frustrated with the Steelers coaches early in the fourth quarter of Sunday’s game and it led to him being caught on the CBS television cameras having a very animated sideline conversation with offensive coordinator Randy Fichtner. Some of what Brown had to say might have been directed at Steelers wide receivers coach Darryl Drake as well as you can see in the gif below.

Brown’s week started with him threatening ESPN senior writer Jesse Washington on Twitter for a critical article he recently wrote about the Steelers wide receiver. Brown then issued a statement through the Steelers to the Pittsburgh Post-Gazette apologizing for his threatening tweet a few days later.

“I made a mistake in judgment with my tweet last week, and I apologize for that,” the statement said. “It is not OK to threaten anyone and I need to be better spiritually and professionally. Though I do not agree with the negative parts of the story about my personal life, I need to have better control over my actions to use social media as a way to engage with my fans, rather than use it improperly.”

Brown had an interesting session with the Steelers media on Friday that included him suggesting that more positive things be written about him and the good he does both on and off the field moving forward.

Brown, for one reason or another, sure didn’t seem to play as high of a percentage of offensive snaps on Sunday that he normally does in games. He shuffled on and off the field a few times on Sunday so it will be interesting to see his total snap count Monday morning.

After the Steelers loss to the Chiefs on Sunday, Brown also reportedly wasted no time getting out of the team’s locker room as he had already left before the media arrived, according to Jeremy Fowler of ESPN.com. Additionally, Brown reportedly walked off by himself and with head down, while rest of his offensive teammates celebrated the late-game touchdown scramble by quarterback Ben Roethlisberger, according to Fowler.

Brown left locker room before reporters arrived RT @JFowlerESPN: Something going on with Antonio Brown. Walked off by himself, head down, while rest of team celebrated Ben Roethlisberger score. Appeared to get into it with Randy Fichtner earlier.

During his post game press conference, Roethlisberger was asked about Brown and specifically if there was anything go on between the two players being as they don’t appear to be as connected on the field as they normally are through the team’s first two games.

“I don’t think so,” Roethlisberger said. “I know defenses are doing a good job of trying to take him away, doubling and putting extra people around him. So, other guys are stepping up. Jesse James, JuJu [Smith-Schuster], obviously, is doing some great things. I thought Switz [Ryan Switzer] did a good job tonight. I thought James Washington was making plays. So, the other guys stepped up and did some good things today.”

You can bet that we’ll be writing and talking more about Brown and his Sunday sideline outburst throughout this next week and expect Roethlisberger to be asked about that during his Tuesday morning radio interview.