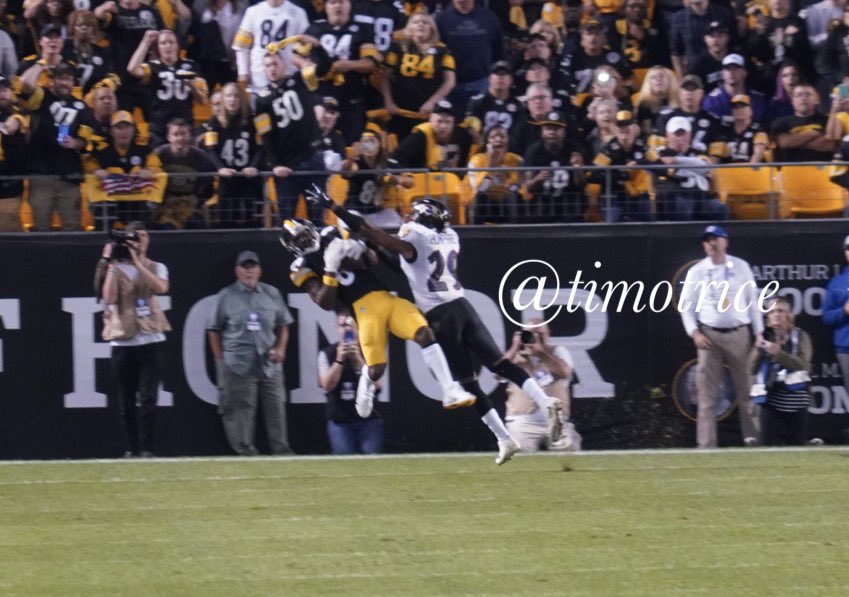 Welp, that was awful. Punished by the Baltimore Ravens on your home turf in a primetime matchup. Winners and losers from this mess, a 26-14 Pittsburgh Steelers loss.

Vance McDonald: McDonald picked up where he left off last week. Most of his damage came in the first half but he was an asset over the middle, doing the dirty work and gaining some serious yards post-contact. A bona fide weapon, as long as this finds ways to give him the football.

Joe Haden: Not a lot of positives in the secondary, Sean Davis did force a fumble and Coty Sensabaugh was ok, but Haden was the best of the bunch. As usual. Not sure what happened on that ugly first TD, I’ll need to rewatch it, but beyond that, he played well. One of only two corners I trust on this team, Mike Hilton being the other. Heck, that same statement applies to the entire secondary.

Bud Dupree: When you’re struggling for winners, Dupree ends up on the list. I think Keith Butler pretty much knows at this point you have to scheme it for him to win, his sack tonight came off a stunt, but I’ll take any sort of production on a night where Joe Flacco’s jersey barely needs to be put through the washer.

Chris Boswell: Though neither of his two field goals were very difficult, tonight should be a good confidence booster for him. And hopefully puts him on track the rest of the season.

Pass Protection: Another game where Ben Roethlisberger had to throw the entire game. And the OL kept him clean. Only two hits on him all game long. The run game was a different story but in pass pro, this group was excellent. Not an easy task on a short week against a Ravens team who throws a ton of looks at you.

Run Game: Not a shock because it’s Baltimore but another ineffective game running the football. James Conner has barely been averaging 3 YPC since the Browns game. Entire game on Roethlisberger’s shoulders. Again.

Ben Roethlisberger: And Roethlisberger was not his usual impressive self tonight. So the offense stalled out. He missed over the middle, couldn’t get on the same page as Antonio Brown, and simply didn’t make the plays the offenses demands out him on a weekly basis.

Coaching: Lot of “popcorn” here. Keith Butler for a unit that can’t seem to communicate. A defense penalized for 12 men, again, and seemed to have sub issues. Again. Randy Fichtner didn’t call a great game, running for running’s sake. The 2nd and 20 handoff hurt my soul. And Mike Tomlin went against his own philosophy to challenge a spot call. Predictably lost it. They did this team no favors.

Terrell Edmunds: Worst game of his young career. Just didn’t seem to match the intensity of Steelers/Ravens his first time out, though to be fair to him, few on this defense did, veteran or not. He got stuck in a tough matchup on a 71 yard John Brown reception but was still toasted. Later, he got his eyes stuck in the backfield instead of supporting Joe Haden over the top, making it a 50/50 ball.

He was bad and it’s fair to assume Morgan Burnett will take over as the starting SS once he’s healthy.

Nat Berhe: Berhe replaced Burnett as the dime defender. He left with an injury but his play was worthy of a demotion. Not someone who should be asked to cover…anyone, really. Baltimore knew to go after him with repeated success.

Stephon Tuitt/Cam Heyward: Someone put them on a milk carton. Nowhere to be found. Through the first month, the two have combined for a grand total of one sack. The front seven lost the line of scrimmage and the Ravens’ backs consistently worked into the second level untouched. Scratching my head at this one.

Jordan Berry: Berry did have a nice punt late in the game but if there’s a time they’re going to make a change, it could be now. A 33 yarder that barely squeaked inside the 20 was awful. On a game like this, with so much on the line, the standard is raised. And Berry didn’t meet it. Unfortunately for the Steelers, he wasn’t alone.