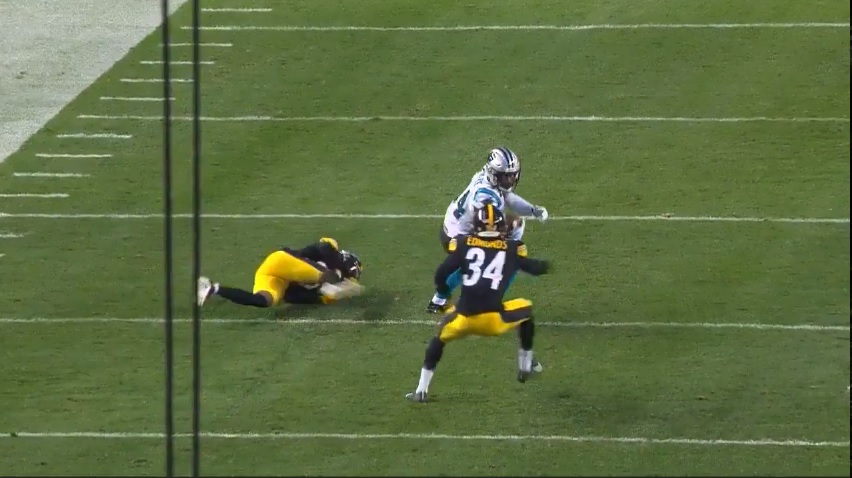 One week after missing seven tackles against the Tennessee Titans at Heinz Field, the Pittsburgh Steelers doubled that total Thursday night in the final tune-up against the Carolina Panthers. However, the Steelers didn’t have many starters on the field in the game.

Matthew Thomas and Jon Bostic recorded misses on the day, but overall the defense was stout on Thursday night throughout the night.

Total Misses through 3 weeks of preseason — 58

So, a couple of takeaways from the final preseason game in the tackling department.

Thomas had an outstanding preseason and missed just two tackles, both coming in the final preseason game after he’d all but locked up a roster spot. The guy can really play.

Take a look at how many special teams tackles Brian Allen missed. For a guy who likely made the roster because Danny Smith pounded the table for him on special teams, you can’t be out there recording 75 percent of your missed tackles on special teams.

Last one:  Ola Adeniyi was arguably the best defender on the field for the Steelers throughout the preseason, sans Matthew Thomas. The guy did lead the Steelers in missed tackles this preseason with seven, but he played very well and flashed as a pass rusher. The Steelers found something in Adeniyi.

A short little dumpoff over the middle from Garrett Gilbert to Cameron Artis-Payne catches Thomas off-balance coming up from his drop.

Thomas closes quickly, but his angle is slightly off, allowing Artis-Payne to set him up for the cutback.

Thomas has a long reach, but he wasn’t able to recover in enough time to make a strong stick and wrestle the running back to the ground.

Once again, another little dumpoff into the flat that results in a missed tackle for the Steelers. This time, it’s Cam Sutton coming up from his cornerback position.

As I wrote in the positional grades piece after the game, I felt Sutton had a rough game. This missed tackle didn’t help.

As I said, playing the boundary looked uncomfortable for him, but this is a stop he has to come up and make. Fortunately for Sutton, his teammates were able to swarm to the football to get the back on the ground quickly.

Marcus Allen struggled in the tackling department after his gruesome play with Malik Golden that resulted in the fellow Penn State product getting carted off with a knee injury.

Here in the flat, Allen is hesitant. That’s unlike him, because he prides himself on coming downhill to make thunderous stops. Maybe the play was still haunting him. We’ll never know. But he has to come up with force here and not let the runner dictate the pace of the play.

Allen gets caught flat-footed, allowing the back to shake him, causing Allen to grasp at air as the back went by.

Aside from missed tackles by the Steelers, Pittsburgh had a preseason-high in forced misses.

Two roster bubble guys leading the Steelers in forced misses is a great sign. Henderson and Dobbs left it all out on the field when given opportunities. Hopefully the Steelers can find a way to keep both.