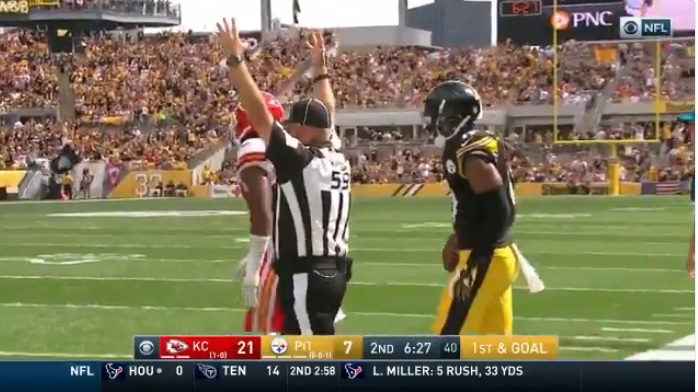 Trouble is brewing in the Steel City. One week after blowing a 14-point fourth quarter lead, the Pittsburgh Steelers came out Sunday afternoon in the home opener against the Kansas City Chiefs and gave up 42 points to Patrick Mahomes and an explosive Kansas City offense, dropping a 42-37 decision to fall to 0-1-1 on the year.

Defensively, that might have been one of the worst performances I’ve seen from the Steelers in quite some time, and that includes last season’s divisional round lost to the Jacksonville Jaguars at home.

Pittsburgh has a ton of flaws right now, mainly on defense. Let’s take a look at some grades.

That was classic Ben Roethlisberger.

After coming out slow Sunday afternoon, Roethlisberer caught fire, rallying the Steelers from a 21-0 deficit to tie the game at the half. Roethlisberger stayed hot from there, finishing 39-for-60 for 452 yards and 3 passing touchdowns. The veteran quarterback bought time in the pocket, extended plays and took shots down the field, resulting in an explosive offensive output.

Unfortunately it didn’t come in a win as the Steelers wasted a prime Ben performances.

Despite putting up massive numbers, Roethlisberger struggled to be on the same page with Antonio Brown for the second straight week. Roethlisberger also missed high on a number of throws, and continues to struggle with his deep balls, throwing them out of bounds rather than giving his receivers a shot at making a play down the field.

Without Roethlisberger today, who knows how badly the Steelers lose.

Last week James Conner rushed for 135 yards, but in Week 2 in his first start at home, Conner rushed for just 17 yards on 8 carries, averaging 2.1 yards per carry. Conner did add a rushing touchdown through second effort, and converted a 2-point conversion, but it was a tough day on the ground for the second-year product out of Pittsburgh.

Through the air, Conner added 48 yards receiving on 5 catches, breaking a number of tackles in the process.

Behind Conner, Stevan Ridley got some work, rushing for 2 yards on his lone carry of the game while adding 5 yards on 1 catch.

Conner and Ridley’s numbers were so low on the ground due to the Steelers being in catch-up mode early and often.

I mentioned earlier that Roethlisberger and Brown weren’t on the same page throughout the game for the second straight week, but despite those struggles Brown hauled in 9 receptions for 67 yards on 17 targets. Roethlisberger force-fed him the ball quite a bit on Sunday, but there were some throws that just weren’t close when AB was open.

They both need to get that ironed out before the Monday night game at Tampa Bay.

Roethlisberger and JuJu Smith-Schuster clicked quite a bit on Sunday, as Smith-Schuster had a career game, hauling in 13 passes for 121 yards and 1 score on 19 targets.

Washington’s touchdown was a nice one too, considering Ben was in scramble mode, Washington saw it and broke up the field, giving Roethlisberger a target to throw to.

If this grade were for Jesse James alone, it would be an A+++.

James was spectacular on Sunday, hauling in 5 passes for 138 yards and 1 touchdown, doing most of his damage on scramble drills with Roethlisberger. James has really developed great chemistry with Roethlisberger, serving as his safety outlet when plays break down.

It’s still incredible to me that defenses lose containment on James when plays break down and Roethlisberger gets on the move. Twice on Sunday James slipped the defense for big gains.

Aside from James, Vance McDonald had a rough day in his return to the lineup. Despite recording 26 yards on 3 catches, McDonald hurt the Steelers offense multiple times with dumb blocking penalties. For a guy who is so good in the blocking department, he really hindered the Steelers comeback attempts with penalties that set back the offense time and time again.

The offensive line was awesome on Sunday, allowing just 1 sack and 3 quarterback hits in 60 passing attempts for Roethlisberger. That being said, they did get lucky in the first quarter when Chris Jones’ fumble return for a score off of a strip and sack of Roethlisberger was called off due to a defensive holding call.

After struggling to block Myles Garrett last week, I thought Alejandro Villanueva — despite a block in the back call on a screen — was outstanding. He showed quick feet and great hands setting up against Dee Ford on Sunday.

Ramon Foster and Marcus Gilbert struggled in pass protection on Sunday at times, but Roethlisberger’s mobility and quick release helped cover up those struggles at times.

Filling in for David DeCastro, BJ Finney looked pretty good, which shouldn’t be a surprise to anyone. Maurkice Pouncey had a solid game in protection as well.

The issue with the offensive line for me from this game was the inability to establish a running game. As a team, the Steelers averaged just 2.5 yards per carry against a team that gave up 5.6 yards per carry last week against the Los Angeles Chargers.

Did Cam Heyward and Stephon Tuitt show up this week?

Aside from Heyward’s forced fumble on Chris Conley, the defensive end duo was really, really quiet on Sunday. Sure, 8 combined tackles is nice, but throughout the first three quarters of the game they were quiet and didn’t make much of an impact.

Javon Hargrave was really quiet too, but Daniel McCullers had a good game for Pittsburgh, recording the Steelers lone sack of the day. Too many times though, the Steelers couldn’t get a stop on the ground as Kareem Hunt rushed for 4.2 yards per carry in the win.

When not stopping the rush, the defensive line didn’t get much of a pass rush push either, which allowed Mahomes to pick apart the Steelers secondary to put up 42 points.

For a team that drafted two safeties in April, they still seem to turn to inside linebackers with below average coverage skills to cover move tight ends down the seam.

Jon Bostic and Vince Williams really struggled in coverage on Sunday against Travis Kelce, who carved up the Steelers in the middle of the field Sunday afternoon.

Bostic and Williams played well coming downhill against the run at times, but they were exposed time and time again in pass coverage.

Outside, I thought TJ Watt was really good once again, while Bud Dupree played well in the first half, but the duo did very little to generate a pass rush on Sunday as well, allowing Mahomes to stand comfortably in the pocket.

Watt had a hand in the safety, blocking up the play right away, but the OLB duo combined for just 4 tackles. Have to be better, especially at home against a team that is pass first.

Miscommunications, missed tackles, and blown coverages really did in the Steelers secondary on the day.

Without Joe Haden, the secondary lacked leadership, which was quite evident with the struggles with communication. After Morgan Burnett was brought in from Green Bay, that problem was supposed to be corrected. Two games in, it clearly isn’t.

Sean Davis tried to do too much Sunday afternoon in his centerfield role, while Terrell Edmunds had a disastrous game, missing a tackle on Hunt for a touchdown, and got over too late on a seam route to Kelce for the score.

Artie Burns just isn’t what the Steelers thought he was. Against a good offense, the Chiefs torched the third-year cornerback over and over and over again. Cam Sutton isn’t a boundary corner either. He’s much more comfortable in the slot playing man coverage.

Mike Hilton missed a tackle for the second straight week, while Coty Sensabaugh came on in relief of Sutton and played well in the second half.

It was a day to forget for the secondary, and one that skyrocketed concerns about the defense as a whole once again.

Is something wrong with Chris Boswell? A missed field goal for the second straight week, and a missed extra point is cause for concern with the kicker who just received a big extension from the team. I have no doubts he’ll turn it around, but he has really hurt the Steelers in the first two weeks of the season.

It might be time for the Steelers to explore bringing in a punter for a tryout soon. Jordan Berry focused on directional punts to keep the ball away from Tyreek Hill, but he left punts short multiple times when kicking out of bounds, and punted one out of the back of the end zone late in the game with the Steelers near midfield. Berry did kick one out of bounds at the 1-yard line, but he was a disaster on Sunday.

Speaking of the punting game, the Steelers got off to a bad start on Sunday with the first punt, as the Chiefs faked out the Steelers by deploying De’Anthony Thomas in front of Hill. The Steelers ignored Thomas, going after Hill. Thomas caught the punt and raced 48 yards down the right sideline, setting up Conley’s touchdown catch on the third play of the game for the Chiefs.

Kick coverage was fine for the Steelers, but kick returns were bad. Switzer averaged just 16 yards per return, and the Steelers routinely started inside their own 20 on the day due to special teams penalties.

On the second-to-last play of the game, Tyler Matakevich picked up a roughing the punter penalty, ending the game when the Steelers were going to have one last shot at a Hail Mary.