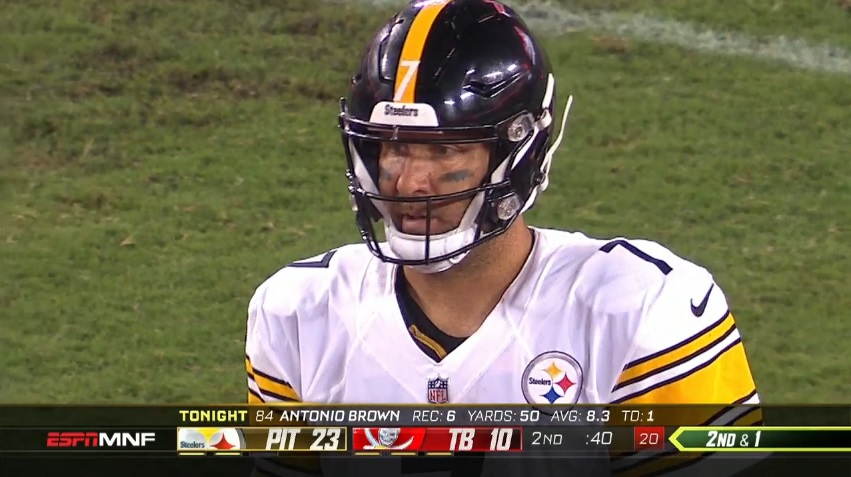 What a rollercoaster that was!

For those of you that have health problems, I strongly advise not watching the Pittsburgh Steelers the rest of the season, especially if Monday night’s 30-27 win over the Tampa Bay Buccaneers was any indication of just how up-and-down this team is going to be the rest of the way.

Ryan Fitzpatrick fell apart early in the game, allowing the Steelers to race out to a 30-10 lead at the half, but Fitzmagic reached back into his bag of tricks in the second half, helping the Buccaneers rally to make it a 3-point game late in the fourth quarter before the Steelers held on for thrilling win.

Like I do every week, I’ll take a look at each position group and hand out grades. Let’s take a look.

In a game that the Steelers absolutely had to have, Ben Roethlisberger came through in a big way, shedding the “Road Ben” label for at least one game, surgically carving up the Buccaneers defense, finishing 30-for-38 for 358 yards, with 3 touchdowns, 1 interception and 1 fumble in the win.

Late in the game, Roethlisberger was vintage Ben, keeping the play alive, escaping a sack to find JuJu Smith-Schuster, all but sealing the win.

In the first half, Roethlisberger was spectacular, making decisive throws with conviction in the intermediate range. Yes, his numbers in the first half were spiked due to Vance McDonald’s incredible 75-yard catch-and-run for a score, but Roethlisberger showed how much of a zone he was in on the 2-minute drive, dissecting the Buccaneers defense, leading the Steelers down the field.

Roethlisberger is throwing more than he ever has in his career through three weeks, but he’s on some sort of roll in the last 2 weeks. That’s a great sign for the Steelers.

James Conner came on strong in the fourth quarter, racking up 48 of his 61 rushing yards in the final quarter, including a 27-yard jaunt to help seal the win. Conner struggled with footing on a sloppy field Monday night, but he got stronger as game progressed and really wore down the Tampa Bay front 7 when the Steelers needed him to the most.

Out of the backfield, Conner again made plays, catching 5 balls for 34 yards, including a big 18-yard catch-and-run with the Steelers driving late in the first half.

Last week wasn’t Conner’s best game, but he bounced back with a big one when the Steelers needed it the most.

Behind Conner, Stevan Ridley played well, running hard in relief of the second-year pro, racking up 18 yards on 3 carries, breaking a couple of tackles in the process. It was nice to see the veteran come in as the change-of-pace for the Steelers.

For the third straight week to open the season, Smith-Schuster racked up 100 yards receiving, finishing with 9 receptions for 116 yards on 11 targets, including a long of 43 yards down the middle of the field in the first quarter.

Roethlisberger and Smith-Schuster are really starting to develop a strong rapport, as the veteran constantly looks for Smith-Schuster over the middle of the field when he breaks out of the pocket looking to extend plays.

Antonio Brown had a curious week, but once the lights came on, 84 produced as expected. Brown hauled in 6 balls for 50 yards and a touchdown, making two defenders miss on the touchdown, a simple quick stop.

James Washington reigned in two passes for 25 yards in the win, both of which were huge catches in the middle of the field, helping the Steelers offense keep the chains moving on scoring drives.

That stiff arm to Chris Conte might force the veteran safety to retire at this point. That’s the second time in his career he’s taken a mean stiff arm to the face on a highlight reel touchdown.

McDonald’s touchdown seemed to spark the Steelers offense, which got on a roll at that point. Aside from his 75-yard touchdown, McDonald finished with 3 other catches for 37 yards, giving him four for 112 and a touchdown on the night.

Jesse James had one catch for 7 yards after a career week, but was solid as a run blocker down the stretch, as was Xavier Grimble.

This group was a weakness to open the season, but 2 great weeks has the arrow pointing sky high.

If I were grading this group on the final possession of the game, it would be an A+.

However, the group can’t be graded that way.

Overall, this group struggled against an improved Tampa Bay front 7, allowing three sacks and nine quarterback hits on a night in which they were missing David DeCastro and Marcus Gilbert on the right side of the offensive line.

On the left side, Alejandro Villanueva and Ramon Foster had strong games. Villanueva handled Jason Pierre-Paul well throughout the game, while Foster got going in the run game, moving bodies left and right.

Center Maurkice Pouncey had a few curious exchanges with Roethlisberger on snaps, which seemed to blow up the plays before they started. He’s had some snapping issues this season. Keep an eye on that.

The right side struggled for the most part, as BJ Finney had a tough time with Gerald McCoy, while Matt Feiler was hit or miss. It would have been nice to see a guy like Chukwuma Okorafor get a shot on a few drives to see what he could bring to the table, but I understand going with the veteran you trust.

It’s clear that Feiler is much more comfortable at guard though.

At times, Peyton Barber gashed this group on the ground, but from a pass-rush perspective, these guys got after it.

It wasn’t a great performance by this group from a stats perspective, but they ate up blockers against the run, helped collapse the pocket as pass rushers, and really made Fitzpatrick uncomfortable for a majority of the game.

Once again, Jon Bostic and Vince Williams struggled to cover guys like OJ Howard and Cameron Brate down the seam, but overall the two veteran inside linebackers had solid games, combining for 11 tackles, one sack, two tackles for loss, a pair of quarterback hits and a lone pass breakup.

Bostic broke up the pass as a free rusher off the edge, getting his hands up in Fitzpatrick’s throwing lane, tipping the ball into the air allowing Mike Hilton to come down with interception in the red zone, keeping the Buccaneers off the board.

The Steelers have to figure out how to handle move tight ends though. Enough is enough. They drafted 2 safeties and signed 1 in free agency this year to help that area out. Instead, they’ve asked Bostic and Williams to carry them down the seam that last 2 weeks. It’s not working.

Outside, Bud Dupree had a strong game, recording 3 tackles, 1 sack, 1 tackle for loss, 1 quarterback hit, 4 pressures, and a pick-6 in the win, turning in arguably his best all-around performance in 4 years as a Steeler. Dupree did leave a sack on the board in the fourth quarter, missing Fitzpatrick in the backfield after smoking Donovan Smith off the edge for a clean look at the veteran quarterback.

TJ Watt had 4 tackles and 2 quarterback hits in the win, but he looked really uncomfortable dropping into coverage on the night, and was called for a holding penalty on Howard on the left sideline in the second half.

Anthony Chickillo played well in his return to Florida, recording a sack in the win. He didn’t rack up the stats, but he was constantly around the ball on the night.

Sensabaugh tackled Godwin in the end zone on his fourth-quarter touchdown, rather than playing the ball, while Evans burned Burns twice on the night – once for 51 yards and once for 24 yards and a touchdown.

The one redeeming play for Burns Monday night was the forced fumble on Godwin that Hilton recovered for his first turnover.

Speaking of Hilton, he was excellent on the night before leaving with an injury suffered on a tackle. It looked like he was clamoring to get back into the game down the stretch but was held out as a precaution, so keep an eye on that later this week.

Hilton was a ball magnet for the Steelers, recovering the fumble and picking off Fitzpatrick in the red zone. He was also pretty stout as a tackler, and helped negate Adam Humphries and Jackson in the slot before exiting with the injury.

At safety, Sean Davis had another rough game, getting called for a couple of really stupid penalties, helping Tampa Bay keep drives alive. He’s got to be smarter.

Between the whistles in terms of plays made, Davis struggled in the single-high role early before the Steelers put Terrell Edmunds into the game to help roll coverage over top of Evans. Davis finished second on the team in tackles and looked good coming up against the run, but the penalties really put a damper on his night.

As for Edmunds, he recorded his first career regular season interception, racing 35 yards on the return to set the Steelers up in great field position. Edmunds was key early in the second half in helping the Steelers take away Evans, rolling a safety over the top.

Penalties continue to hinder the Steelers on special teams, as do the struggles of Chris Boswell.

Boswell missed a field goal and an extra point again, while a mind-blowing penalty on Darrius Heyward-Bey late in the game cost the Steelers field position after a good punt from Jordan Berry seemed to pin the Buccaneers at their own 1 yard line.

Something is amiss with Boswell. He’s kicked in tough conditions 2 out of 3 games on the season, but there’s no excuse for one of the best kickers in football. He needs to figure it out, and fast.

As for Berry, he knew he was punting for his job and turned in a net average of 45.6 yards on 5 punts, dropping 2 inside the 20-yard line. However, he nearly cost the Steelers 7 points when he boomed one midway through the fourth quarter that Jackson appeared to take back 83 yards for a score. The touchdown was wiped out due to a holding penalty on the Buccaneers, but Berry outkicked his coverage, never giving his guys a real chance at corralling the speedy Jackson on the slick field.