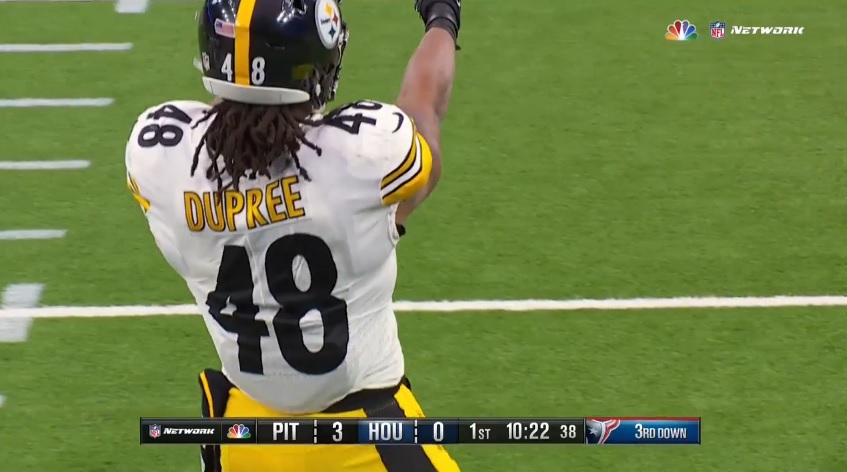 As we will do every Saturday to get you ready for the week’s game, our X Factor of the week. Sometimes it’s a player, unit, concept, or scheme. What will make or break the Pittsburgh Steelers in the 2018 opener against the Cleveland Browns.

There’s probably going to be a chunk of overlap in this article and what Dave Bryan wrote yesterday, given the news the Browns will start UDFA rookie Desmond Harrison at left tackle. That doesn’t mean a guy like Harrison has to struggle. To be fair to him, he fell out of the draft largely for character concerns, not talent. But on paper, it’s going to be one of the best matchups for Bud Dupree he’ll get all season and a world of difference than if he was facing, say Joe Thomas, who retired after last season.

And it’s Dupree’s first test in 16 of them to show he’s worth the 5th year option the front office picked up but could still do away with after the year without any dead money. The commitment literally is in paper only.

We all know he needs to have a great season. Not a good one. Great one. Few players on this team are under the pressure and scrutiny he is. At least Artie Burns and Sean Davis have more time in their rookie contracts and there isn’t the same investment in someone like Jon Bostic.

Now Pittsburgh have moved Dupree to the right side, which they claim is his more natural side and is better suited to his strengths. I’m far from convinced, especially as a pass rusher (in run defense, it makes more sense), but hey, maybe I’m wrong.

It’s not just about beating up on the rookie though. The Steelers are facing one of the most mobile quarterbacks they’ll play all season long, right behind Cam Newton in a couple months, and keeping Tyrod Taylor in the pocket is critical. Pittsburgh didn’t show good enough QB containment and rush lane integrity in the preseason.

Last year, facing a similarly athletic QB, this defense sacked DeShone Kizer seven times. In part, that came because of great spacing, integrity, guys being in the right spots and keeping the QB within the pocket. They’ll have to do just as well against a tougher quarterback.

That means that Dupree won’t be asked to straight up beat Harrison on every snap. As we recently wrote about, pass rushers don’t always have a “two way go.” Sometimes, they have to take the boring, outside rush to free up something else, or to not allow a quarterback from breaking contain and rendering a blitz ineffective. Dupree has to avoid getting pushed up the arc, stay in his gap when asked to, and not let Taylor get outside of him and turn the play into a messy scramble drill where it becomes a free for all.

Finally, I can’t wait to see how much they drop him into coverage. Every year under Keith Butler, the ROLB – Dupree’s spot – dropped more than the left. Does that have to remain true this season? No. But he did quite a bit of it in the preseason, 38.2% of the time according to our charting. We know he’s more comfortable moving forwards than backwards but if those facts are any indication, he’ll have to make plays in coverage too to have a well-rounded, successful 2018 campaign.

Dupree is capable of having a great year. It starts tomorrow.