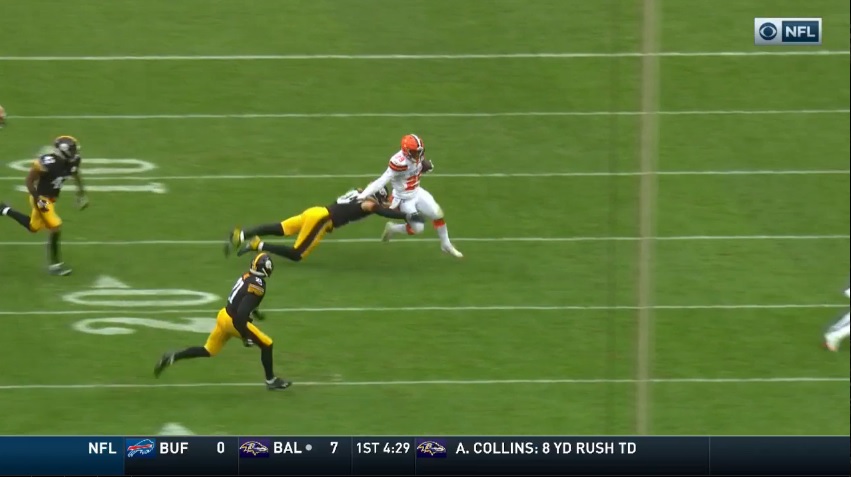 Now that a few days have passed since Sunday’s 21-21 tie between the Pittsburgh Steelers and the Cleveland Browns at FirstEnergy Stadium in Cleveland, the pain and frustration of the tie should have subsided some. Or not.

Regardless, it’s time to move on a bit from Sunday’s game by putting a bow on the game. Today, I take a look at how the Steelers faired in missed tackles and forced misses on Sunday in the rain.

Taking a look at the list above, the biggest concern that jumps out is Tuitt’s game-high 3 misses. One of Tuitt’s came on Heyward’s sack, in which Tuitt was held at the start of the play. However, Tuitt’s 2 other misses came against the run. He’ll need to clean that up as the season goes.

Haden missed 2 tackles in run support, as Nick Chubb stiff-armed him to the ground, and Carlos Hyde ran right through one of his arm tackles. Williams made a ton of plays on Sunday, but his 2 misses came on first-down conversions for the Browns.

Overall, the Steelers did a nice job of tackling on Sunday in poor conditions. The 11 misses could look alarming reading that, but none of the misses really came back to haunt the Steelers.

Watt had a monster game Sunday afternoon in a downpour recording 4 sacks, Watt missed a tackle in the first quarter with the Browns facing a long 3rd and 6 deep in their own territory.

The Browns run a draw play to Duke Johnson Jr. that’s designed to get him into space. The play works perfectly as the Steelers don’t have a defender on the left side of the Browns’ defense, forcing Watt to try and run down the play from the far side.

Watt covers a ton of ground on the play, but he just can’t close down the angle quickly enough, ending up diving at Johnson Jr.’s legs. The Cleveland scat back is able to slip out of the tackle, picking up a first down, getting the Browns out of a jam deep in their own end.

Later in the first half, Vince Williams comes up with his first miss.

Facing a 3rd and 4, the Browns turn to Tyrod Taylor and his legs to pick up the first down. Running the read-option, Taylor keeps it and eludes a defender and a blocker right away in the backfield.

From there, Williams finds himself 1-on-1 in space with Taylor. The Cleveland quarterback is able to create just enough room with Williams, causing Williams to dive for the attempted stop.

Taylor is just strong enough, and Williams doesn’t get enough on the tackle attempt, allowing Taylor to scamper for the first down, keeping the drive alive.

In the third quarter on Cleveland’s first drive of the second half, the Browns turned to the ground game and physically dominated the Steelers.

Bringing Chubb into the game to give Hyde a rest, the Browns fed Chubb the ball right away.

While the blocking up front is very good on this run by Chubb, Williams takes the wrong route to the back, missing the tackle. Once Chubb reaches the second level, he shoves aside Haden, chalking up another miss for the veteran cornerback in his second game back in Cleveland since being released last fall.

Like I said earlier, I thought the Steelers did a good job of tackling in poor conditions, and none of the misses really came back to hurt the Steelers in the end.

From an offensive standpoint, the Steelers forced an impressive 10 misses. While they do finish -1 in the tackling department after one game, Ryan Switzer and James Conner really showed some wiggle on Sunday.