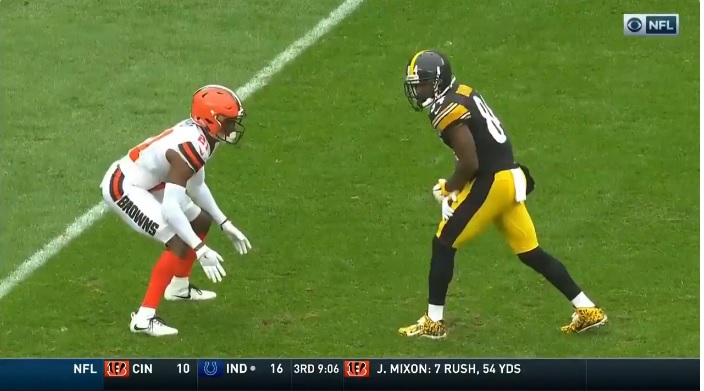 The play was just as ugly as the playing conditions at times as the Pittsburgh Steelers tied the Browns 21-21 after an insane sequence of events in Cleveland.

Ben Roethlisberger certainly came out looking ugly from the start, as the quarterback threw four interceptions on the day. Along with six total team turnovers, it was Roethlisberger’s final interception that would be look to be most costly, coming with under two minutes left in overtime and giving the Browns excellent field position. But just as you would expect, the Browns’ potential game winning kick was blocked by T.J. Watt. Watt not only preserved the tie but his four sacks were instrumental to his team’s efforts.

Watt’s efforts were a last gasp effort that saw the Steelers surrendered a 14-point lead in regulation leading to this moment.

With just over ten minutes remaining in the second quarter, the Steelers would break the stalemate. A ten play, 88-yard drive that saw Roethlisberger scramble and extend plays like only he could, was finished off by James Conner, who punched in a four-yard carry for the first touchdown of his NFL career and his first of two touchdowns on the day.

Conner started out hot, erasing all memory of Le’Veon Bell for majority of the game. The former Pittsburgh Panther running back finished with 135 rushing yards and 57 receiving yards and two touchdowns. Conner was on his way to a doubtless performance but a late fumble helped rejuvenate the Browns offense and made it a 7-point game with just under ten minutes to go.

The Browns offense started their climb back into the game early in the second half. After a second half opening sack by T.J. Watt, his one of three sacks on the day, the Steelers racked up three penalties in two plays. Two penalties being committed by Artie Burns, losing his cool on Browns’ receiver Jarvis Landry, giving the Browns 30 yards in penalty yardage and a boost to their confidence. Quarterback Tyrod Taylor would rally his troops and gash the Steelers’ defense, tying the game at 7-7 with a 20-yard scramble into the endzone.

Roethlisberger would not have much of the Browns’ new-found confidence, quickly getting back to work and erasing his poor first half. A 67-yard catch and run by JuJu Smith-Schuster, brought the Steelers down to the seven-yard line. After back to back penalties, Roethlisberger was facing second and goal from the 22-yard line but an incredibly accurate back shoulder fade to Antonio Brown put the team back in front 14-7. Brown would finish with nine receptions for 93 yards while Smith-Schuster was the team’s leading receiver with five catches for 119 yards.

Up 21-7, Roethlisberger and the offense were their own undoing. First a fumble by Conner after the defense forced a turnover on downs led to a one-yard touchdown by Browns’ running back Carlos Hyde and the deficit was cut to seven. A second fumble, this time from Roethlisberger followed by another failed attempt to close out the game would give the ball back to Taylor and his offense It took Taylor only two plays to tie the game at 21-21, finding Josh Gordon in the corner of the endzone with just two minutes left.

Overtime would continue with the shenanigans that preceded as it seemed neither team would put be able to clamp down on victory. A botched punt by the Browns would give the Steelers excellent field position but the usually consistent Chris Boswell missed a potential game winning 42-yard field goal. Boswell’s kick was followed by the Brown’s having their own attempt blocked, leading to the stalemate.

With a sloppy result in sloppy conditions, Mike Tomlin will have a lot of homework to do as he now prepares his team in anticipation for their home opener next Sunday against the Kansas City Chiefs at 1:00 pm EST.