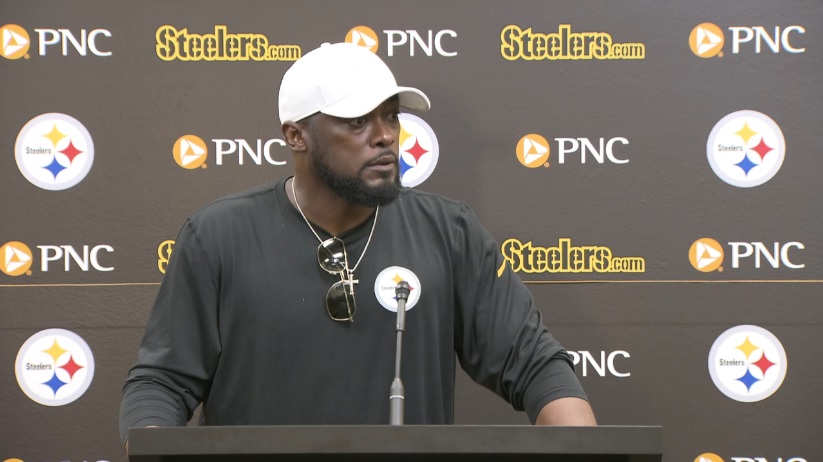 Reeling from ten years of unmet lofty Steelers Nation expectations as head coach of the Pittsburgh Steelers, Mike Tomin returns to the place where it basically all started for him as his team is in Tampa Bay to face the surprising Buccaneers.

It is somewhat perfect theatrical timing that Tomlin’s mentor and former Steelers player and coach Tony Dungy will be receiving his Ring of Honor for the Tampa Bay Buccaneers tonight.

Dungy taught Tomlin the power of patience, and that is something certainly in short supply already this season for the Pittsburgh faithful.

Will Tomlin and his struggling squad be able to turn things around in Tampa? Or will this be the place where it all unravels into a genuinely dismal season for the Black and Gold?

Well…you know how it goes. You’ve got to Spin it to find out.

So…just so y’all know…the Steelers will win again this season. In fact, they will win many again this season. They’ll win some big games. Maybe tonight. Maybe next week against the Baltimore Ravens. And all of the people who called for Tomlin’s and General Manager Kevin Colbert’s heads will be shamed by those currently hiding in the Tomlin Raving Fan Witness Protection Program.

In fact, Pittsburgh will go on to an impressive streak of wins at some point this season. They’ll make it into the playoffs, by winning the division, or through a narrow Wildcard entry. There…they’ll lose in disappointing fashion, and then back into the Witness Protection Program the Tomlin Raving Fans will go. How do we know this? We don’t…for sure. But it has been the protocol for the past ten years, has it not?

The Business Strategy Of Almost

Lest the proud members of Steelers Nation forget…the National Football League was not actually formed by an amendment to the United States Constitution. It is not even truly a national treasure. Rather, it is a business. A brutal business where there is a bottom line and the Chief Executive Officers and Vice Presidents of Human Resources get fired every year. Contrary to popular opinion, it is a business the Steelers have excelled at for decades.

You see, as wonderful as it is to raise a fingerprint-splotched Lombardi trophy to the skies as giant confetti rains down, that’s not REALLY what’s on the business plan. There isn’t a single NFL team spreadsheet where its financial forecast is dependent upon its team winning the Super Bowl. No…instead, profitability comes from being a winning team.

Any reasonable business plan aims to achieve predictable cash flow, consistent revenues, steady product sales and a relatively content, ticket and jersey buying consumer base. Because of this, regardless of a Super Bowl drought, the Steelers remain the envy of NFL executives and owners year in and year out.

It’s why the front office will always be more thrilled with coaches like Bill Cowher and Mike Tomlin than the fans.

They may run out of steam in the playoffs each year, but they consistently and predictably know how to win.

The day longtime Steelers defensive coordinator Dick LeBeau was granted the team’s special “Bruce Arians Retirement Strategy” and told to pack his boxes, Coach Tomlin has been the team’s defensive coordinator. Sure, Keith Butler gets to wear to the fancy headset, and hold onto the laminated play card for show, but this is Tomlin’s Frankenstein creation.

How many years ago was it we were hearing about how much offense had evolved and that the Steelers defense needed to evolve as well? No longer were the Casey Hamptons or Levon Kirklands or heck…Rod Woodsons needed. Instead, the Steelers were looking for players who were hybrids…ones who could provide flexibility to a sophisticated response to four wide receiver sets.

Yet, somewhere in the Steelers floundering grand scheme fashioned together over the past five years or so, the plot was lost. That is, great defenses are made of great football players.

The Chicago Bears proved that point with the Khalil Mack acquisition. How long did it take for Mack to have a significant impact for da Bears? About the time it took for his plane to land at Chicago O’Hare Airport.

How many years has it been that we’ve been told the Steelers defense’s main issue is “communication problems”? Could it possibly be that the scheme we’ve been transitioning to for years is a total flop?

Yes…it’s the players, stupid. Make your first round and second round picks count, add in a key free agent or two, put them all in a position to succeed, train them in a disciplined fashion, and then let the kids play.

It’s for all of these reasons the Steelers have not had a winning defense since Tomlin took over as defensive coordinator.

And yet again…veteran Steelers players are being quoted in the news as saying there is too much drama in a Tomlin locker room. Every year it’s something, isn’t it? This seasonal variety is one where the Le’Veon Bell calamity has been a daily embarrassment. Then there is Antonio Brown who apparently isn’t content with being considered the best all around receiver in the game and potentially one of the greatest ever. I guess that’s just not enough positive press.

Don’t Tell Me About Problems…Give Me The Solutions

So how do we fix this mess? How do the Steelers turn around this sluggish start to their 2018 NFL season and make things respectable in short order? Why…of course…you rely on one of the very best in the game at handling these difficult situations.

That would be Coach Mike Tomlin.

Hey…for all of his shortcomings, there are few better coaches in the history of the league for keeping a team together when the times are stormy and the waves are rising. He’s one of the sharpest people persons to ever don a head coach hat. So…please put down your “Fire Tomlin” banners and your “Can Colbert” signs. The best team possible is in place to help the Steelers to rise to being one of the top “Almost” teams this season.

Further Reasons Not To Panic

This might be the first year in many years, the Cleveland Browns won’t be the…well, Browns. They may have turned a corner on defense and their offense is much improved under their new (insert ironic laughter here) offensive coordinator Todd Haley. So…the tie to open the season against them wasn’t THAT terrible.

And the Kansas City Chiefs? Oh my…that offense is really, really good. Which means the shredding of our defense is a little less shameful. Unfortunately, the Steelers face Ryan “FitzMagic” Fitzpatrick tonight. Historically, he’s always been good for a short run of being super special before his carriage turns into a pumpkin again. The Steelers defense needs to hope there isn’t too much magic left in that hat. It would also help if AB would restore his dramatics to be exclusively distributed on the field of play.

If not, Coach Tomlin, I don’t know if I’ll be able to keep this dam from breaking. There’s water coming through the cracks.