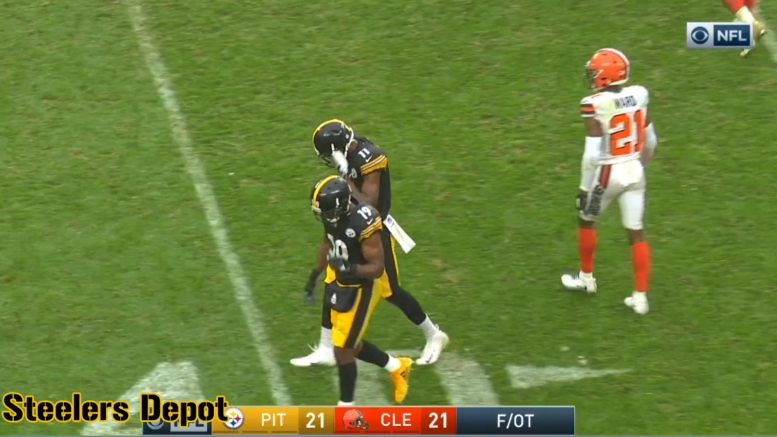 In Pittsburgh, technicalities don’t matter. Every game that the Pittsburgh Steelers don’t win is a game that registers to the team as a loss. While they might get credit for half a win officially, the team is not taking solace in that right now. They might change their tunes if it helps them at the end of the season, but right now, they’re too mad to care.

“I definitely got it as a loss”, cornerback Artie Burns told Joe Starkey. “If we didn’t win, we lost”. Second-year outside linebacker T.J. Watt, who had four sacks and 11 tackles, expressed a similar sentiment, saying that “it doesn’t count as a win, [so] what else does it count for? It’s a loss”.

In truth, the Cleveland Browns, who just did something other than lose a game for the first time in their past 18 attempts, were not exactly dancing and celebrating in the locker room over the half-win-half-loss, either.

But there was still a distinctly different tone between the two sides, especially considering that it was the Browns who had the last, most direct opportunity to win the game. They had a shot at a 43-yard field goal attempt toward the end of overtime, which Watt was able to block to preserve the 21-21 score. That was after they stripped Ben Roethlisberger yet again for the second time to take over possession late, and the momentum.

But it’s not as though the Steelers don’t have ample reason to feel dejected from failing to come out of that stadium with a win, even though they only narrowly escaped defeat by virtue of a blocked field goal. After all, they had just missed their own potential game-winning field goal just minutes prior to that.

And it doesn’t help that they held a 21-7 lead in the fourth quarter, before Myles Garrett happened. He stripped James Conner of the football, which was recovered and returned to the one-yard line, the Browns scoring a touchdown on the next play to make it 21-14. The first strip of Roethlisberger also indirectly led to the game-tying touchdown, in between possessions that saw the Steelers punt from their own 18-yard line.

No, when the Steelers regroup for the first time following this game, they are not going to be talking about coming off of a tie score. They are going to treat it as a loss and move forward as a team coming off a loss.

That is actually the prudent thing to do, to treat a tie as a loss, because either way, you still need to keep one game ahead of the teams around you in the standings. Whether you’re behind by a full loss or half a loss makes no difference. The half of the result that matters is the losing half.