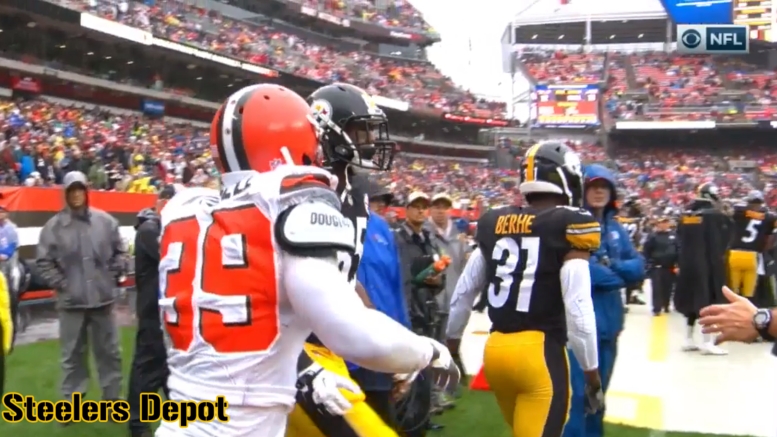 The Pittsburgh Steelers supposedly brought in safety Nat Berhe for the purposes of becoming a core member of their special teams group. After the team decided to part ways with veteran Robert Golden, who had previously served as the captain of the special teams unit, it was assumed that Berhe, a four-way special teams player with the New York Giants, would likely slide seamlessly in to that role.

He didn’t, though; at least not in the season opener. He only logged nine snaps on special teams, all of them coming on the kick return and coverage units. He was not used on either of the punting units.

Was the fact that Berhe was released during the initial 53-man roster cuts, only to be re-signed days later so that they team would move rookie Olasunkanmi Adeniyi to the injured reserve list, an impediment to his playing this week?

If it wasn’t, then it’s not entirely clear why the team kept him only to play on kick returns and coverage. If Dangerfield is the player that they intend to use as the four-phase special teamer, rather than Berhe, then one would think it might make the latter expendable.

As a friendly reminder, the Steelers currently have a total of six safeties on their 53-man roster, which is an amount that I’m willing to guess that they have never carried before. They dressed five safeties on Sunday, with the sixth—rookie fifth-round draft pick Marcus Allen—serving as an inactive.

The team used three safeties on defense, those being Sean Davis, Terrell Edmunds, and Morgan Burnett. Edmunds, by the way, also logged 26 snaps on special teams, and Davis saw 11 snaps himself, more than Berhe did.

Not that there is any obvious immediate player or position that the Steelers should be looking to address, but I can’t help but think that Allen could play Berhe’s role if they are not going to ask him to be a four-phase player. Allen played 22 snaps on special teams in the preseason finale, including 12 on the kickoff units.

That would allow the team, just as an example, to bring outside linebacker Keion Adams up from the practice squad if they wanted. Or they could call up Brian Allen, the cornerback, as Joe Haden is currently dealing with a hamstring injury, so there are only four healthy cornerbacks at the moment.

I don’t mean to advocate for a player being released, but it seems to go against the purpose of bringing Berhe in if he’s not going to be a core member of the special teams unit. Will that change this week?