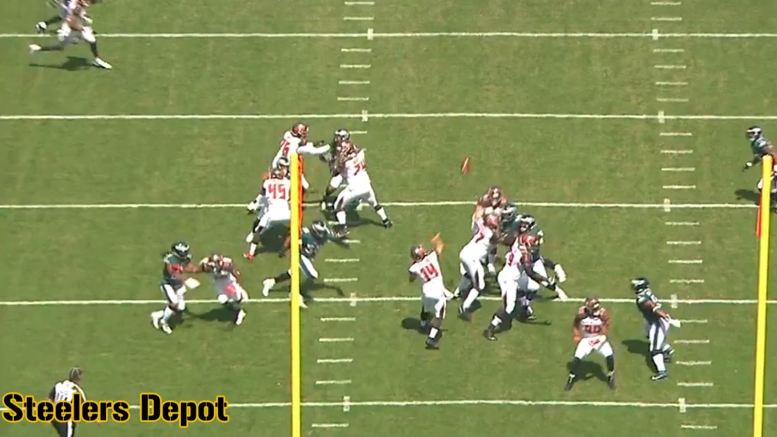 This likely will not shock you, so it probably doesn’t matter at all whether or not you’re sitting down, but no team in the NFL has been worse than the Pittsburgh Steelers through the first two games of the 2018 regular season in giving up yardage on deep passes.

According to Pro Football Focus, the Steelers’ 250 yards allowed on passes that traveled at least 20 yards through the air is the most of any team that has played so far this season. And they are about to play the team that is largely responsible for the next two teams on the list: the Tampa Bay Buccaneers.

The surprising 2-0 Bucs, without their starting quarterback, have been an aerial assault. Only three teams are averaging more explosive passing plays per game than they are, with nine through two weeks, or 4.5 per game. The Kansas City Chiefs have 17 through three games. The Los Angeles Chargers and Oakland Raiders have 16 and 15, respectively. Bonus: the Steelers also have nine through two games.

The Buccaneers have been as proficient as any on their deep passes. Ryan Fitzpatrick and Patrick Mahomes are the only two quarterbacks in the league to have thrown for over 200 yards on deep passes so far, and the former has a good lead on the latter with 282 deep passing yards to 240 through two games.

What’s worse, Fitzpatrick has been very accurate on deep passes, completing six of eight, which have produced four touchdowns. That is the highest completion percentage on deep passes so far in the NFL, with the exception of Baker Mayfield, who had 23 total pass attempts on the season, and just one deep pass attempt.

The Buccaneers have let the veteran quarterback pick and choose the opportunities that he takes down the field, averaging just four deep targets per game. In contrast, Mahomes has attempted 13 deep passes, completing eight of them.

Worst of all is actually Ben Roethlisberger, as should be no surprise. He leads the league with 17 pass attempts on deep throws, but has only completed three of them. That is the fourth-worst percentage of connections on deep passes among all quarterbacks with at least five deep attempts.

So you have among the very best in deep passers going up against among the very worst, at least through the first two games. But things can change quickly. I’m not necessarily saying that you should get your hopes up for the Steelers suddenly slowing teams down or for Roethlisberger to find his touch on the deep ball overnight, but crazier things have happened.