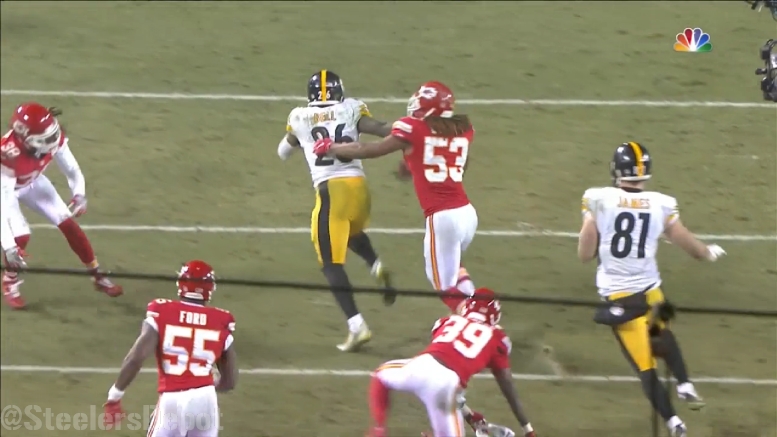 The Pittsburgh Steelers rank fifth in the league after one game with 159 rushing yards after one game, 135 of which came from their temporary new starting running back, James Conner, in his first career start on Sunday in the season opener against the Cleveland Browns.

Next week, they host the Kansas City Chiefs, against whom they have had a tremendous amount of success on the ground during their recent meetings. They are hoping to continue that good fortune. As one player told Jeremy Fowler, “I hope that’s a matchup thing and not a 2-6 thing”, referring to Le’Veon Bell, the Steelers’ would-be starter who is sitting out an undetermined portion of this season with an eye toward 2019 free agency.

Steelers have 469 rushing yards in last three games against the Chiefs. “I hope that’s a matchup thing and not a 2-6 thing,” one Steelers player said.

Over the past three meetings dating back to the 2016 season (including a postseason matchup), the Steelers have rushed for 149, 171, and 194 yards, going from the earliest to latest showing, so there has been a progressive trend toward the positive.

Bell rushed for 170 yards on 30 carries when the Steelers beat the Chiefs during the 2016 postseason. In the regular season matchup of the same year, he gained 144 yards on just 18 carries, with a long of 44 yards late in the game.

You can go back further. When the two teams played in 2015, the Steelers rushed for 147 yards, with Bell getting 121 of those yards on his own on 17 carries, though they didn’t have the same success during their 2014 meeting.

Over the past four games against the Chiefs in the last three seasons, though, the Steelers have rushed for a total of 661 yards, averaging 165.25 rushing yards per game. While having Bell there surely helps, it’s clear that it’s beyond just one player, and has something to do with the matchup.

Will Conner (and Stevan Ridley and Jaylen Samuels) be able to find similar success in the same gameplan? Kansas City allowed 123 rushing yards in their opener (a loss) on 22 carries against a team that threw the ball 51 times.

They have taken some losses on the defensive side of the ball since last year, including the fact that they are now starting Xavier Williams at nose tackle, who had two starts in his first three seasons, all with the Arizona Cardinals. They are depending on Chris Jones to step his game up to another level in his third season.