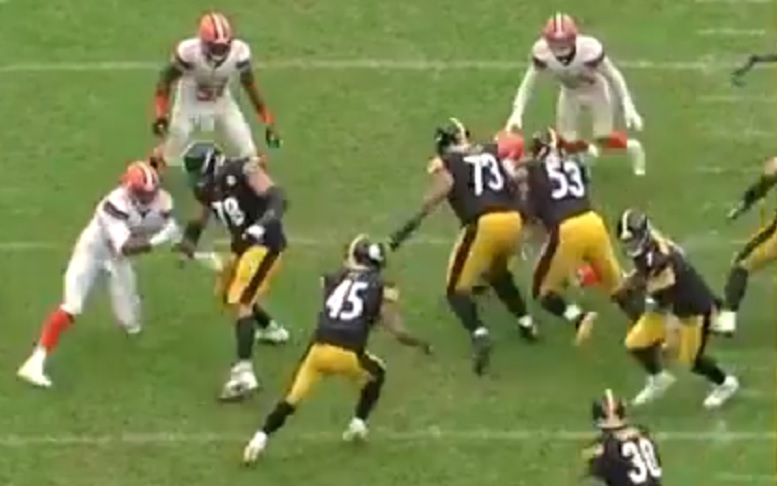 According to most media members and fans, the play of Pittsburgh Steelers left tackle Alejandro Villanueva against the Cleveland Browns in Week was atrocious and especially when matched up against defensive end Myles Garrett. With so many people now carrying that narrative post-game, it must be true, right?

While Villanueva’s play on Sunday against the Browns was obviously far from perfect, the current narrative that he was awful in Cleveland and especially against Garrett, last year’s first overall draft pick, is just way off base.

After going back through the all-22 tape from Sunday’s game multiple times, I have identified eight total snaps of Villanueva’s that need to be broken down in detail. Most of these are obviously poor plays by Villanueva, but a few others not so egregious in nature.

Not a great job technique-wise by Villanueva as he allows Garrett to get leverage on him as the tackle’s hands are outside. The Browns defensive end is then able to drive the Steelers tackle back into quarterback Ben Roethlisberger.

While I personally do not ding Villanueva for this Garrett sack of Roethlisberger to start the second quarter, I am including it to show that it’s a result of coverage and the quarterback holding the football more than anything. Villanueva runs Garrett way up the outside arc roughly 10 yards before finally losing the edge to the defensive end. If you time this sack from snap to first contact of Roethlisberger, it’s nearly 5 full seconds. That’s plenty of protection time and especially against a player such as Garrett.

At last glance, Pro Football Focus only charged Villanueva with one pressure on Sunday and this is likely the play they are referencing. The pressure came via Browns defensive tackle Larry Ogunjobi as a result of Villanueva letting him cross his face and gaining inside access. The pressure forces Roethlisberger from the pocket and after an incompleted pass, the quarterback is roughed by Garrett, who had dropped on the play.

This is another play that I wrestled with including in this post but being as Garrett impacted it while squaring off against Villanueva, I decided I better show it. While Garrett doesn’t get penetration on this particular play, Villanueva is unable to keep him fully out of Roethlisberger’s passing lane. Additionally, Villanueva probably needed to do a better job of tying up Garrett’s long arms as he gets them up to deflect the pass that was nearly intercepted.

Unfortunately for Villanueva and based mainly on the ultimate outcome of the play, this is likely the one most people remember that involved him during Sunday’s game. This, in my opinion, was Villanueva’s single-worst play of Sunday’s game. His attempt to chop/muscle Garrett deep by him was so very unsuccessful. Because of this huge error by Villanueva, Garrett is able to quickly flatten out and track down running back James Conner from behind. Not only that, Garrett strips the football away from Conner and the turnover results in the Browns being set up at the Steelers goal-line. Had the outcome of the play not been so horrific, I doubt Villanueva’s missed block of Garrett would be as magnified as it was after the game was over.

While Garrett didn’t register the run tackle on this particular overtime play, he impacted it greatly by gaining access to the gap after crossing the face of Villanueva. There is some really bad footwork on this play by Villanueva. Garrett gaining gap access forces Conner to his right where more bad blocking results in just a 2-yard gain.

This is the overtime hold on Villanueva and it’s an obvious take-down that warranted a penalty flag. Garrett’s quickness at the snap combined with Villanueva opening the gate resulted in the Steelers tackle needing to take the defensive end to the ground to prevent Roethlisberger from being hit. The penalty resulted in a stalled drive.

While this overtime sack didn’t get credited to Villanueva, the Steelers tackle didn’t help the situation out by allowing Browns linebacker Christian Kirksey to get the better of him on his way to getting deep pocket penetration.

Summation: Villanueva’s performance Sunday against the Browns certainly won’t be getting him any first-team All-Pro votes to start the regular season. With that said, if you watch the all-22 tape of the game from start to finish you’ll see that Villanueva’s overall play in Week 1 was far from atrocious and especially when it comes to his one-on-one matchups against Garrett.

While this post only shows Villanueva’s bad plays against the Browns on Sunday, I could write another that will show him getting the best of Garrett in Week 1 quite a bit and especially on a few running plays to his side of which a few went for huge yardage.

Make no mistake about it, Garret had a fine game on Sunday against the Steelers as the Browns defensive end registered 6 total tackles of which two were sacks. He also forced two fumbles, defensed one pass, and drew one holding call. That stat line noted, he really didn’t dominate Villanueva like his numbers and others would lead you to believe if you didn’t watch the game closely, which is something I think several failed to do.

In case you’re curious, Garrett, according to PFF, only registered two total pressures against the Steelers and both were his sacks. One of those two sacks came late in the game and I already detailed that failed trap RPO in previous post.