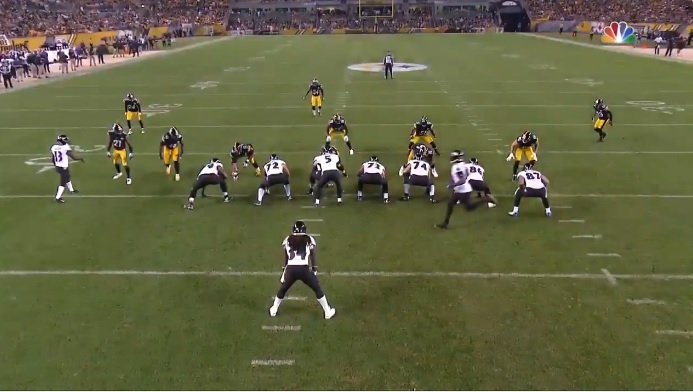 The Pittsburgh Steelers gave their home crowd a reason to cheer about for roughly 15 minutes, but it was not enough as the team crumbled to the hands of the Baltimore Ravens 26-14. The team fell behind early, sparked a comeback and then ran out of gas as they could not provide much in the second half.

This game followed the same plot line that the Steelers’ first home game followed. In stage one, the Heinz Field crowd saw another early deficit caused by a slow offense and poor showing on defense.

It took the Ravens just over four minutes and eight plays to go ahead 7-0. Joe Flacco completed all four of his passes, including a 33-yard touchdown pass to John Brown, who coasted by both Joe Haden and Cam Sutton.

Disaster would strike as a Vance McDonald fumble would give the ball back to the Ravens, who would score on the result of a 3-yard touchdown pass from Flacco to running back Alex Collins.

Just like last week with McDonald’s stiff arm, stage two saw the Steelers benefit off a momentum shifting play. With the Ravens positioned at the Steelers’ two-yard line, on the heels of a 21-3 lead, safety Sean Davis was able to rip the football out of Collins hands and the ball was recovered by rookie safety Terrell Edmunds. This is the second week that Edmunds has been involved in a crucial turnover and this one would result in an 11-point swing.

After a pair of Chris Boswell field goals, the Steelers found themselves down 14-6 before halftime but the resurgence of Antonio Brown saw the team tie the game at 14 at the midway point. Brown has been a crucial player in all Steelers/Ravens divisional matchups and he made his impact during the second quarter, readjusting and contorting to catch a 26-yard touchdown pass from Ben Roethlisberger. Brown would finish with five receptions for 62 yards.

Stage three was a quiet one as both team’s defenses rose to the occasion in the third quarter as a Justin Tucker field goal were the only points scored. Haden had multiple pass break ups that likely saved a multitude of points from being scored. While for the Ravens, their biggest defender was Roethlisberger himself. On two third down occasions, Roethlisberger missed a wide-open Brown, giving the football back to the Ravens.

The Ravens would continue to push away from the Steelers lead heading into the fourth quarter as a triplet of field goals from Tucker gave the Ravens a 23-14 lead. Flacco completed 28/42 passes for 363 yards with two touchdowns and zero interceptions.

Stage four saw the Steelers continue to struggle to move the ball offensively. While Roethlisberger had a marvellous second quarter, he struggled for the rest of the game. The Steelers also had no one to pick up the quarterback’s slack as James Conner finished with nine carries for 19 yards, his longest rush being just four yards. And the defense was unable to get off the field on third down, allowing the Ravens to convert 8/17 of their first downs, in comparison the Steelers converted just 2/12. Without a run game or defense, the game came down to Roethlisberger, who just did not have his best stuff, throwing a late interception to seal the game with just over three minutes remaining.

The Steelers will not have to leave Pittsburgh as they return to Heinz Field next Sunday to take on the Atlanta Falcons at 1 pm EST.