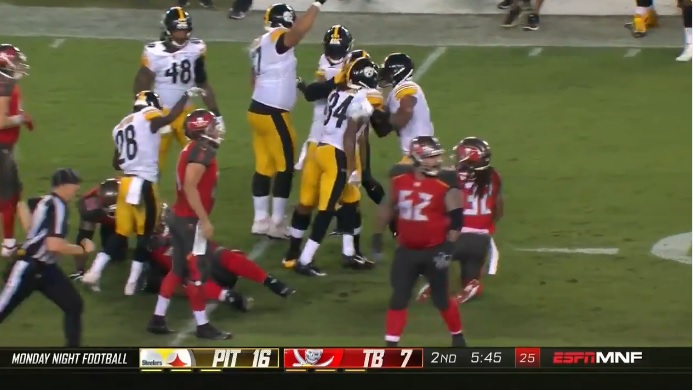 A bonkers game. But a victory. So I’ll take it. Let’s get a little weird.

– Let’s begin with the score. On its face, nothing super interesting about a 30-27 outcome. But the Steelers put up 30 points in the first half and then didn’t score again the rest of the way. Only the 4th time that’s happened in franchise history, the first since 1995. That day, Steelers dropped 31 on the San Diego Chargers in the first half. Won 31-16.

– Game rested on Ben Roethlisberger’s shoulders and potentially still sore elbow. He’s now attempted 139 passes through the first three weeks, a career high by a wide margin (previous high was 120). His 1140 yards ranks 6th in league history over the same time span. Trails only Tom Brady, Kurt Warner, Drew Bledsoe, and Peyton Manning. (and behind Ryan Fitzpatrick, who has done it this year too).

– One negative stat. The Steelers now have 37 penalties through the first three weeks, a franchise record. It’s the most by any team through three games since the 1998 Oakland Raiders (38). The record is 45, set by Washington in 1948.

– Vance McDonald’s 75 yard touchdown was the longest receiving play by a Steelers tight end since Heath Miller went 87 yards against the Miami Dolphins in 2006.

– Bud Dupree’s pick six was the first such play by a Steeler since William Gay did it to open up the 2nd half against the Bengals in 2015.

– Pittsburgh picked off three passes in the first half. That hasn’t happened since Week 17 against Cleveland in 2011. They forced four first half turnovers for the first time since the 2010 opener against the Tennessee Titans.

– Dupree’s INT was the first of his NFL career. He only had one in college, October 4th, 2014 against South Carolina.

He returned that one for a pick six too. Crazy.