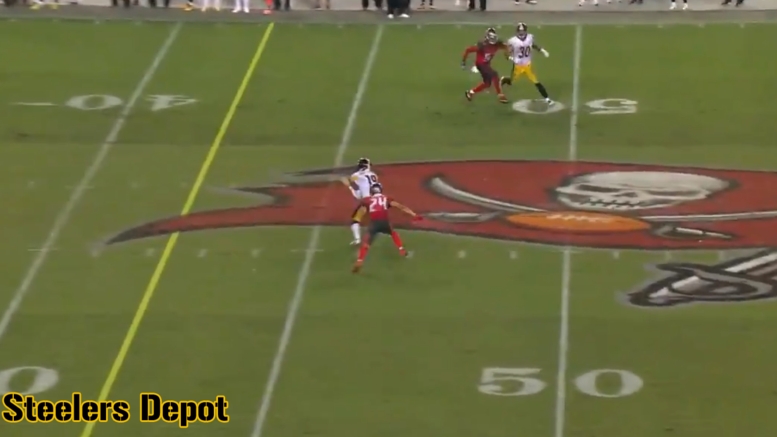 It would be a rash rush to judgement to suggest after three games into the 2018 regular season that wide receiver Antonio Brown is no longer the Pittsburgh Steelers’ top target, or their best wide receiver. The perennial All-Pro caught six passes for 50 yards tonight, including an impressive 27-yard touchdown.

But on a down-to-down basis, there is no argument that second-year wide receiver JuJu Smith-Schuster has been the team’s most important pass-catcher so far this season, and that was never more evident than when he came up with a critical 18-yard reception on second and 10 with 2:31 to go and the team clinging to a three-point lead that represented the evaporated residue of a 20-point advantage.

That catch was just one of nine on the day for Smith-Schuster, who went for 116 yards. In fact, he had gone for over 100 yards in every game this year so far, an impressive feat, and now has 27 receptions for 356 yards on the season, including one touchdown.

The young man—who is still 21 years old, mind you—has really developed into pretty much a complete wide receiver, though with the slow emergence of rookie James Washington, he is seeing a massive percentage of his snaps come from the slot, where he has been incredibly successful.

And to think that the game started off with his first target being intercepted. Not that it was his fault—Ben Roethlisberger never should have thrown the pass—but it’s hard to imagine the night having gone as it did from that point forward.

His first catch of the game would come a drive later when Roethlisberger found him for a 43-yard deep pass, beating, I believe, the same safety who cut in front of him for an interception. That helped kickstart the offense, at least leading to a field goal drive…their first field goal of the season. Chris Boswell is now one-for-four on the year.

Smith-Schuster converted on second down twice for Roethlisberger on the Steelers’ first touchdown drive of the night with 12-yard gains. He was unable to hang on to a would-be touchdown pass that he bobbled and allowed a defender to catch up with to break up, but Ryan Switzer would score two snaps later.

The offense is using the young receiver in any role they can think of from the slot at this point, both as a possession target and as a deep option. In fact, he is the only one with multiple receptions on designed deep throws this year from Roethlisberger, I believe, who has struggled on such passes so far.

Even Smith-Schuster acknowledged heading into his second season that things would only get harder for him with defensive coordinators having a year of tape on him, but so far, it hasn’t looked that way. Perhaps that’s partly thanks to the mismatches he receives out of the slot. Perhaps he’s just that good. Either way, it translated into a win tonight.