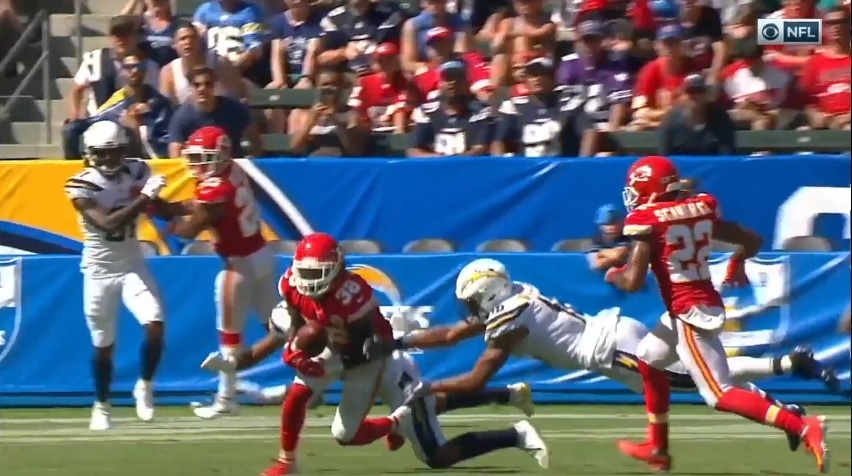 The Chiefs, still led by DC Bob Sutton, are running their 3-4 defense. #96 Allen Bailey plays LDE, #98 Xavier Williams at nose, and #95 Chris Jones at RDE. A strong front. Bailey has always been very underrated while Jones played well against the Chargers. Like the Steelers, two rotational players behind them. #91 Derek Nnadi and #94 Jarvis Jenkins back them up.

Justin Houston and Dee Ford started at left and right OLB last week. Two familiar names there. Reggie Ragland was a great find and gave the Chiefs more stability last season while they added Anthony Hitchens, who I wanted the Steelers to go after in the offseason, to replace Derrick Johnson.

Adding Ragland has been huge to their defense. In the past, the Steelers have had huge days running the football (149 yards in 2016, 194 in 2017) in part due to the Chiefs playing so much sub-package football, using safety Daniel Sorensen as their de facto #2 ILB. Made it easy to run on them. Going to be more difficult this time around.

However, #48 Terrance Smith spent plenty of time replacing Ragland. A guy they like to blitz, move around, use his athleticism. Still, it’s a team that went from functionally having 1 ILB the last couple years to several options. That’s good news for them.

The hulking Tanoh Kpassagnon and rookie Breeland Speaks are the backups at OLB. Chiefs don’t just play sides, even the backups can flip spots, so you can’t zero in on just one matchup if you’re Marcus Gilbert or Alejandro Villanueva.

Nothing super fancy up front. Chargers found some success running up the middle. But with the sample size, it’s hard to say much definitive.

As of this writing, looks unlikely that safety Eric Berry, who also missed Week One, will play. Chiefs got torched against the Chargers, allowing 34 points, and it should’ve been more. We’ll get to that in a second.

Ron Parker, brought back, will play FS alongside Eric Murray. Kendall Fuller is at RCB with Steven Nelson opposite, who also kicks inside when they go nickel. Ex-Cowboy Orlando Scandrick is the third corner in.

Cover 1 and Cover 2 are the majority coverages. Again, with just one week, hard to draw hard conclusions, but on 3rd and long against a 3×1 set, Chiefs love to run Cover 2. Couple examples from last week.

Not a heavy blitz team from the secondary. At least, not last week. They count on their front seven to get the job done.

Think you can test this defense vertically. Chargers sure did and they had their opportunities. Just hilariously couldn’t convert. This is all from the second quarter alone. Got behind the Chiefs’ defense three times.

The Chargers had so many chances Sunday. Chiefs routinely gave up the long ball. Three incompletions, all in the 2nd quarter. Steelers gotta take advantage. pic.twitter.com/WneDr1ZTzH

Probably the best unit on this defense with RDE Chris Jones, Xavier Williams at the nose, and Allen Bailey as the LDE.

Bailey is a physical specimen with great measurables. He’s another perfect fit for this defense and makes it difficult to run the football. He’s much more of a defensive end/defensive tackle hybrid who’s more effective inside on the guard versus outside taking on tackles.

Jones is a hustler. He rarely, if ever, takes a play off. Not only is good at holding his ground, he’s quick to disengage and get after the ball carrier/quarterback. 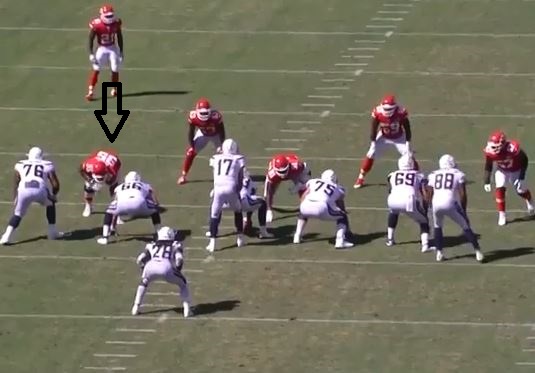 Jones is in a 3-technique and is taken on by both the left guard and tackle, with the tackle chipping and moving into the second level as the play develops. Melvin Gordon is hoping to hit the hole right up the middle, but cuts it outside in part due to Jones’ quick push inside. 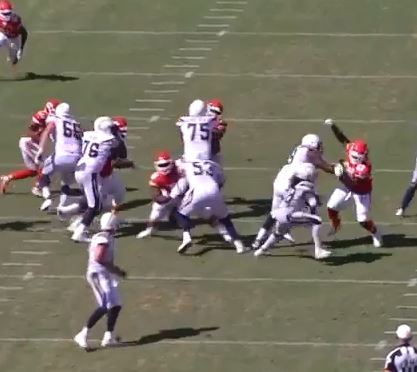 Gordon is forced back inside, and that’s where Jones’ hustle comes into play as he continues to fight off the guard while now trying pivot 90 degrees straight into the backfield. A tough play to make especially after being held once he makes the move inside. 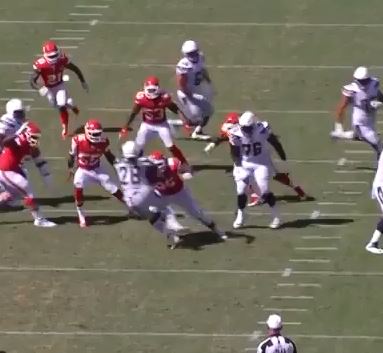 He’s able to shed the hold and meet Gordon in the backfield for a 2-yard loss. With this guy on the line it’s even more imperative to block to the whistle.

Houston remains a valuable playmaker for this unit now in his eighth season. He’s coming off of a 9.5 sack year, and this guy always gets after it. He’s great with his hands, which also allows for batted balls at the line of scrimmage, something he does quite well. He may have lost a bit of his speed, but he still wreaks havoc in the backfield. Now with a healthy Ford on the other side, these two can make for a powerful duo at outside linebacker.

Hitchens is a new addition to the team, and his presence is felt largely in pass coverage. Very quick linebacker who establishes depth well and can run down a ball carrier sideline to sideline. He excels in zone.

Ragland is best in run support, and can make some splash plays in the backfield. He’s good at taking on blockers and won’t lose ground too often. A classic Alabama linebacker that won’t miss tackles and shows great power. That being said he lacks speed and is more vulnerable on coverage downs.

Ford only played in 6 games last season, but is fresh and good to go for the 2018 campaign and he’s a big help to that pass rush.

Here’s he’s going one-one-one with the left guard. And with his quick first step he’s able to put a little fake on the guard. A quick stutter step and then fires on the guard’s outside shoulder. Look at how Ford uses his right arm to rip through the arm-block and from there it’s smooth sailing to the quarterback in under three seconds. With his quickness and athleticism he’ll make it a difficult afternoon when given a mostly free lane.

With the departures of Marcus Peters and Terrance Mitchell it’s a whole new crew at corner for the Chiefs.

RCB Kendall Fuller, Eric Berry is banged up and will likely not play giving way to Eric Murray at Free Safety, Ron Parker is the Strong Safety, and Steven Nelson is the LCB.

Fuller is a physical corner that’s willing to mix in some run support and is disruptive in press. The one knock on him would be his man-to-man speed, but he can make up for it most times with his initial press. He’s a smart ball-hawk player that likes to bait quarterbacks when in zone. He’s a big play guy, but can give up the big play as well, especially against speedy receivers. The deep ball is an area of concern for these defensive backs as Nelson is also very physical at the line, but can lack recovery speed. Valuable in the run game also.

They’re fairly beat up at safety, but Parker returns to the Chiefs having been quite familiar with Bob Sutton’s system. He’s not the flashiest guy, doesn’t have mind-blowing skills, but can make a team pay with his awareness. He does a good job of reading the quarterback and feasts in single-high as seen below in the top left of the image. 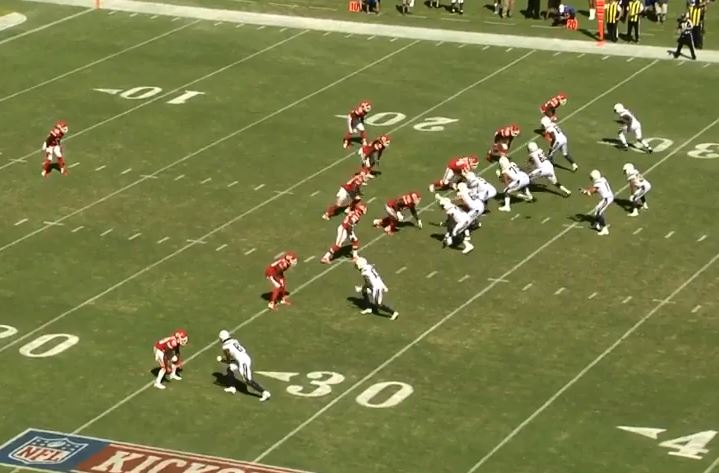 The slot receiver is running a 20-yard out, with the outside receiver running a 9-route one-on-one with Fuller. 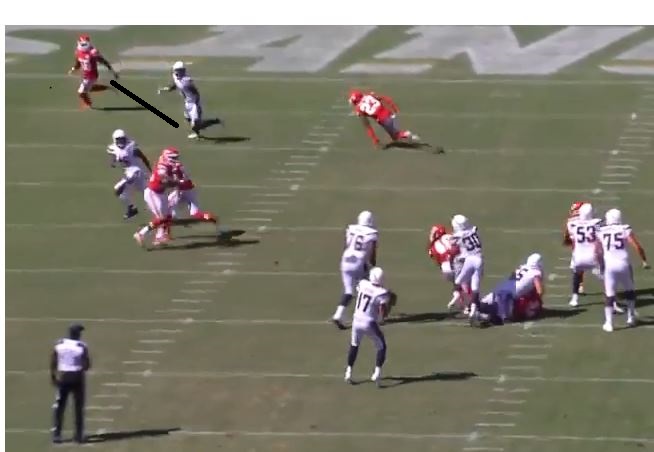 Fuller provides good coverage on the outside, so once the slot receiver comes out of his break, Parker keys in on the route just about 4 yard behind. Notice he keeps his eyes on the quarterback pretty much the entire time. Philip Rivers pumps once, which gives Parker an extra second to break on the route. 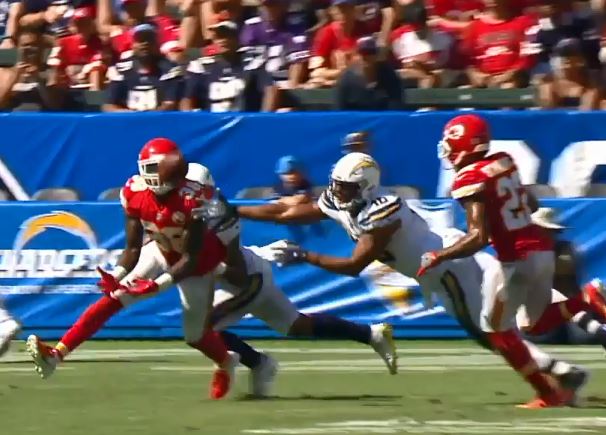 Once the ball is thrown, Parker has already keyed in on the location and steps right in front of the receiver to make a big interception and adds a nice return as well. You’ll need a quicker release, and better disguises to fool Parker particularly when he’s roaming as the center-fielder.