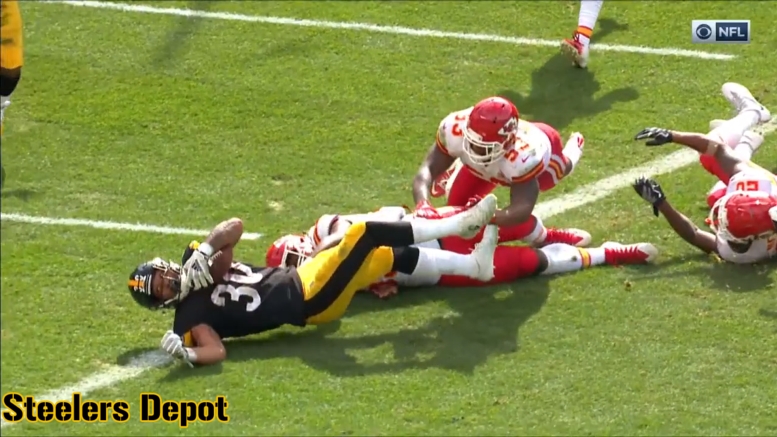 The Pittsburgh Steelers were quite fired up a week ago in breaking out their new-look running game behind fresh starting ballcarrier James Conner, who rushed for 135 yards and two touchdowns on 31 carries in the first start of his career in the season opener against the Cleveland Browns.

They were heading back home to host the Kansas City Chiefs, against whom they have been averaging over 150 rushing yards per game over their last four meetings spanning the 2015 through 2017 seasons. So the matchup was right. The day, however, was not.

Even considering the fact that the Steelers quickly dug themselves into a 21-0 hole in the first quarter, the run game was quite ineffectively pretty consistently throughout the day, outside of a couple of select runs. The truth is that Conner only carried the ball eight times all game, but that wasn’t just because of the score. It’s also because they weren’t finding success.

He rushed for just 17 total yards on his eight attempts, slightly over two yards per carry, with a long of nine yards, one of only two successful runs on the day. The other was a one-yard touchdown run on which it is questionable if he even got in before his elbow was down.

There was finally a carry from a running back other than Conner in the game. Stevan Ridley rushed one time for two yards. He also caught one pass for five yards. Wide receiver Ryan Switzer got the chance to run the ball twice for five yards, including a long of six, and Ben Roethlisberger scrambled for a six-yard touchdown.

In all, the Steelers rushed 13 times in the game for a whopping 33 yards, averaging 2.5 yards per carry. Two of those carries went for losses. Switzer lost a yard on one of his attempts, and Conner was dropped for a loss of three on his first carry.

Despite that, those numbers do include two scores on the ground. And Conner also had five receptions for 48 yards, plus a successful catch on a two-point conversion. He made an astounding one-hand grab as a receiver in the second half, though he did not stay inbounds. He drew a pass interference penalty all the same.

He also suffered an injury on his one-yard score, which is likely the reason that Ridley ever even touched the ball in the game, but he did come back. The Chiefs’ run defense is much improved from a year ago to be sure, but the offense certainly has to do better than this.