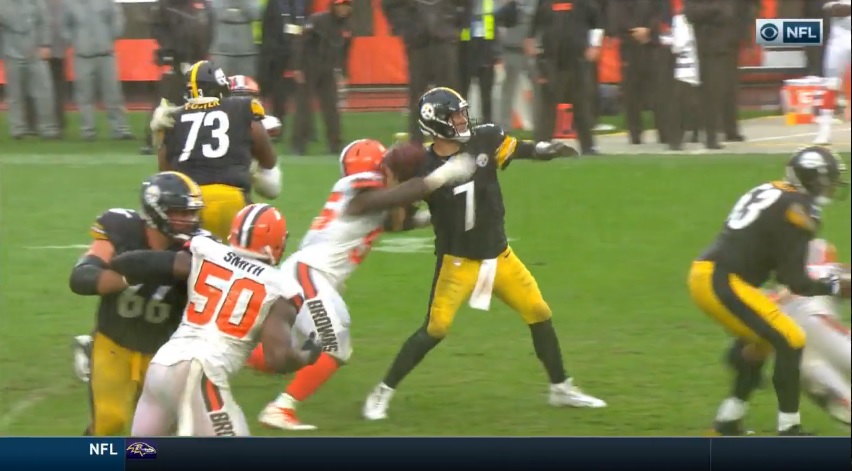 That was one of the most common complaints I saw floating around following his shaky performance against the Cleveland Browns Sunday afternoon. And on the surface, it makes some sense. Less reps, more rust to shake off, makes sense, right?

Roethlisberger, appearing on his weekly radio show, was asked to weigh in on the debate and refuted the notion, saying the mistakes, aside from the first interception to Antonio Brown, had nothing to do with the number of reps he received.

“I don’t think so,” he told Ron Cook and Joe Starkey of 93.7 The Fan. “I think the first interception was me getting a little anxious to get the ball to AB…that one maybe, just having a feel for game speed stuff compared to practice.”

He put the blame on the second pick to not running it in practice, which created miscommunication between himself and Brown.

“The second interception was a play we really hadn’t practiced but we wanted to take a shot. It was one of those ones where AB is 40, 50 yards downfield. And I have to anticipate his angle before he actually gets to his angle. He got up on the safety, I thought he was going to take it a little higher, he took it a little flatter. But the ball was already gone. That’s an unfortunate thing but that has nothing to do with preseason reps.”

The third pick went through Jesse James hands so objectively, a lack of reps has nothing to do with that disastrous result. Roethlisberger blamed it on the rainy weather.

Finally, he didn’t put the strip sack fumbles on a lack of playing time either.

“You get two sack fumbles. When guys come behind you and you can’t see them, I don’t care how many reps you get. You’re not going to be able to do much about that.”

Roethlisberger played just one game in the preseason, getting three series in the third, “tune up” game versus the Tennessee Titans. There’s always a balance between giving enough reps versus mitigating injury risk. Roethlisberger makes a fair case for why those turnovers largely can’t be blamed on a lack of playing time. Though his many other misfires, plays that just ended incomplete, could be attributed to rust. Poor weather conditions, of course, also played a factor.

Either way, Roethlisberger and the Steelers passing game is going to have to do a 180 to hang with a potent Chiefs offense that nearly hung 40 versus the LA Chargers.