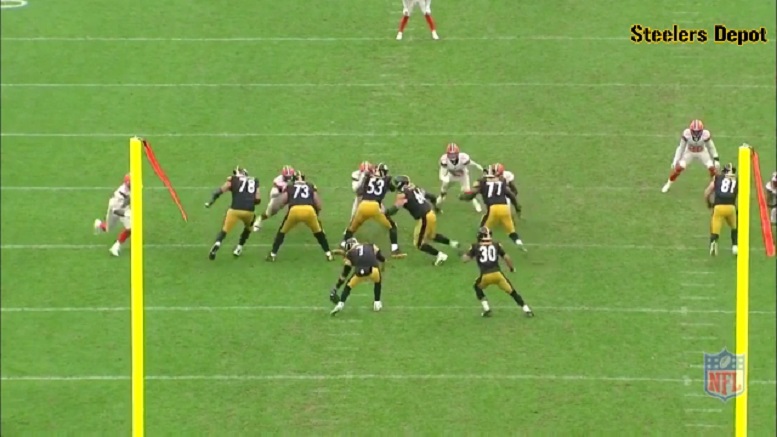 While Pittsburgh Steelers quarterback Ben Roethlisberger has run his fair share of run-pass option plays in previous season, it certainly appears as if he might wind up running a much higher percentage of them this season based entirely on what we saw in the team’s Week 1 game against the Cleveland Browns. Because of that, Roethlisberger was asked during his Wednesday session with the media to give his thoughts on the evolution of RPOs over the years.

“It seems to be the hot topic in football now, whether it’s NFL or college,” Roethlisberger said. “Sometimes it’s just prudent to try things. You can ask receivers to block guys that come down or you can ask them to run a route and if it’s open, you throw it.

Ben Roethlisberger talks about his elbow, the evolution of RPOs and preparing for the Chiefs. pic.twitter.com/pfrwvH82tp

“It’s a little new for me. I mean, we’ve done some of it in the past, but it’s something I’ve got to get used to. I missed an early one to A.B. [Antonio Brown], just understanding how fast certain guys can get there. He gets there a lot quicker than JuJu [Smith-Schuster] did later [in the game].”

Roethlisberger was then immediately asked if he likes running run-pass option plays.

“I just think it gives you options,” Roethlisberger said. “It’s one of those things where you can hand the ball off with eight or nine in the box and beat your head against the wall sometimes or you can find a way to fake it and throw it to a guy if it’s open. So, when it works, it’s really good when it doesn’t, you’ve got to figure something out.”

Roethlisberger’s seemingly heavier than normal use of RPOs against the Browns looked to be either feast or famine when it comes to the results. As he mentioned, one of the RPOs that he ran against the Browns resulted in a big catch and run by wide receiver JuJu Smith-Schuster. That said, the fourth quarter sack fumble of Roethlisberger’s was also an RPO play that went off the rails due mainly to a poor snap by center Maurkice Pouncey.

“So, you know, it’s still gonna take time for me to get used to it and to kind of perfect it and I’m going to work at it though because it can be good as we saw,” Roethlisberger said Wednesday.

Interesting enough, enough, one of Roethlisberger’s good friend in the NFL, Baltimore Ravens safety Eric Weddle, was asked about the evolution of RPOs in the NFL during the offseason and at that time made it known at that time he thinks they’ll run their course as a popular offensive scheme.

“I think in five years, it’s going to be out,” Weddle said. “I think it’s just another phase.”

Weddle didn’t stop there, however, as he said he thinks defenses will eventually get better at defending RPOs.

“It’s just a revolving door,” Weddle said. “It’s just like the Wildcat, and the quarterback run game, yada, yada, yada. Teams that run the ball and take shots are usually the hard teams to beat.”

It will now be interesting to see how many RPOs the Steelers offense runs this coming Sunday at Heinz Field against the Kansas City Chiefs and if the success rate of such plays winds up being higher than in Week 1. Also keep in mind that the Steelers will play Weddle’s Ravens in Week 4.