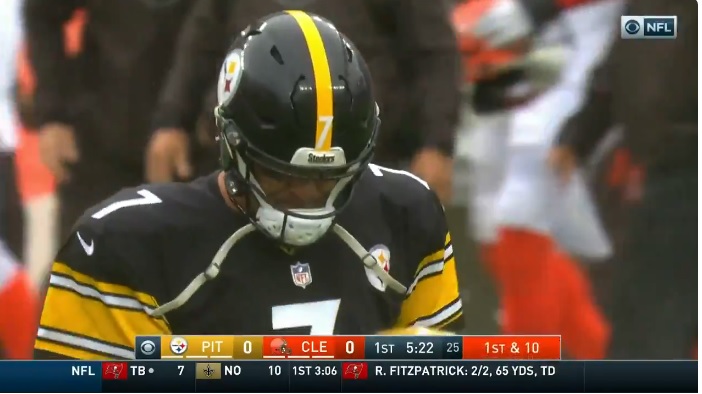 It’s the Pittsburgh Steelers’ worst kept secret. At home, Ben Roethlisberger looks like a Hall of Famer. But on the road? He looks like…Tyrod Taylor minus the legs.

The hope was that could change this season. Not to say that Roethlisberger had to be as dominant at home, almost every QB has worse road splits, but very few are quite as dramatic as Big Ben.

Yes, you can put some of the blame on a crappy weather game few quarterbacks could have thrived in. And sure, some of it is on the offensive line. But Roethlisberger didn’t need to play a great one for the Steelers to emerge victorious. Heck, it didn’t even have to be average.

It just needed to be something other than what Steelers’ fans witnessed today. Six turnovers, Roethlisberger involved in five of them.

The box score doesn’t tell the entire story. You can absolve him of at least one, maybe two, of the interceptions. No argument here. But even when the ball didn’t end up in the hands of the other team, it was ugly. I’d say abnormally so but when it comes to Roethlisberger on the road, this is normal.

His ball placement was consistently poor. Antonio Brown had a back shoulder opportunity in overtime that Roethlisberger missed on, resulting in an incompletion instead of a big play. Or later in the extra period, an ugly ball throw behind and to the wrong shoulder of JuJu Smith-Schuster, landing incomplete again.

Combined, in the 4th quarter and overtime, Roethlisberger was a pitiful 9/18 for 90 yards, and two strip sack fumbles. Even that doesn’t pain how poorly he played, the yards buoyed by third and long situations, screen passes, and checkdowns.

Does all the blame go on #7? No, of course not. But he’s THE most critical piece to their success. The same can be said about their failure.

The next time the Steelers travel, that’s Week 3 against a suddenly high-flying Tampa Bay team, Big Ben is going to have to play like…well, the opposite of what he did today.