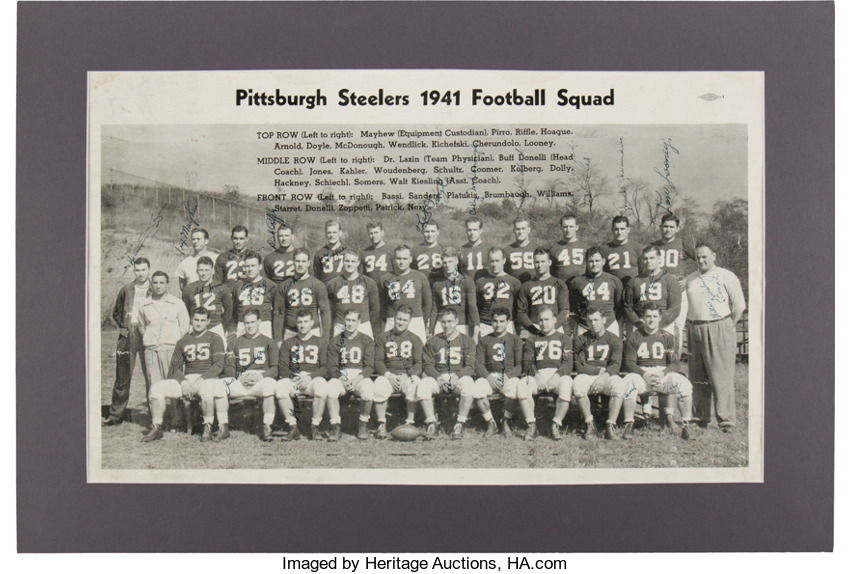 Unless you are an above average Pittsburgh Steelers fan, you have never heard of Ted Doyle. He played at a time when almost no players had an agent to negotiate their contracts or represent them. If a player was represented at all, it’d often be a family member.

However, agents did exist even early in the NFL’s existence. Red Grange engaged C.C. “Cash and Carry” Pyle to negotiate his contract in 1925 with a professional football team while in college. The Galloping Ghost signed a contract with legendary George Halas of the Chicago Bears one day after his final college game with Illinois. Not only did Grange get a huge per game salary, he received a cut from the ticket sales during his famous 19 game barnstorming tour that some estimate at $100,000 ($1.4 million in today’s dollars). Grange and his agent Cash and Carry were even involved in setting up a rival league. But this is another story.

Ted Doyle was a veteran player by the time the United States entered World War II following the Japanese attack on Pearl Harbor in December 1941. The Steelers managed to achieve their first winning season in 1942 even as the team began to lose players to military enlistments and conscription. By May 1943, Pittsburgh only had five players left from their 1942 roster with Doyle being one.

Here is a letter that he sent to Steelers co-owner and President Bert Bell in mid-June 1943 as the team was scrambling to find players for the upcoming season:

“Dear Bert: I would probably play football if the proper arrangements could be made. At the present time I am working from 7:30 AM to 4:15PM and will continue to do so. I also would have to work six days per week most of the time. You see, we are building equipment which is wanted as fast as we can put it out. Last week we worked from 7:30 AM to 7:30PM six days, and then worked eight hours on Sunday. I asked for my vacation early in September, but don’t know whether I will get it then or not. In fact, it looks like that may be one of our busiest periods. My job is building switch panels for Navy fighting boats.

I think it will be possible to carry on with football if we practice evenings and if we allow the boys to work as I do now. Much as I like football, we must do our part for the war effort first and furnish football recreation afterward. I feel that is all the boys work they would be just as well off for the simple reason that they won’t have to worry about what to do with their spare time. In the past year I saw several boys who would have been better ball players if they hadn’t had so much time to go out and tear around. I know that I did a pretty good job and I felt better than I ever had before simply because I didn’t have time to fret and worry about anything.

Eventually, the Steelers would combine with the Philadelphia Eagles to form the Steagles for the 1943 season. Doyle would find time to play in all ten games starting in five. Doyle also played for the Card-Pitt amalgamation in 1944 before finishing his 8th and final season with the 1945 Pittsburgh Steelers.

Prior to playing for Pittsburgh, he was a standout Nebraska Cornhusker. Art Rooney may well have noticed his performances in two losses to the University of Pittsburgh in 1936 & 37. Articles noted that he played very well at right tackle in both games.

The New York Giants selected Doyle in the 8th round of the 1938 NFL draft held on December 12, 1937. However, Rooney and coach Johnny “Blood” McNally swapped their 3rd round pick, fullback Hugh Wolfe, for Doyle at the April owner’s meeting during a trading frenzy.

At first, the Giants appeared to have taken advantage of Art Rooney. Wolfe made the Pro Bowl his rookie season while Doyle was a reserve tackle limited to nine appearances due to a broken arm. Doyle was tough. Injured in an October 9th game, by November 20th he had the cast off and played in the last few games of the season. Hugh Wolfe played one spectacular season and was done.

Doyle would continue for another seven seasons through the war years. He broke his ankle in 1940 but like his rookie year he was back playing within weeks of the injury but limited to six games. By this time, the selective service started a peacetime draft. As a married father, he was one of ten Pittsburgh players who were exempt from conscription.

When Art Rooney sold the Steelers to Alex Thompson, Doyle was one of the Pittsburgh players transferred to the Philadelphia Eagles. When Rooney and Bert Bell switched cities bringing their team to Pittsburgh; Doyle was part of the deal along with the rest of the Eagles. Weird situation where instead of swapping franchises, the respective owners swapped cities.

Doyle moved his family to Carrick, a neighborhood outside Pittsburgh, from Nebraska early in his career. By 1942, he was a veteran player, the 3rd most senior playing his fifth season. Only Armand Niccolai playing his 9th season and Chuck Cherundolo (his 6th) had more experience. But unlike his teammates, Doyle was also a fulltime Westinghouse employee. He would attend football practice in the morning, go home for lunch before heading to his 3-11 PM shift at the plant. He managed to play 30 minutes a game as a key substitute in Pittsburgh’s very first winning season. At the time, he was one of the few players working double duty during the season. The next year would find many more players following his lead.

“Tangle,” as he was called by some teammates described that 1942 team,

“We’ve got some fine rookies and somewhere along the line we dropped that defeatist complex that hounded us for so long. For five years I’ve seen the Steelers plug along without any breakaway backs who are threats every time they get that ball. Now we have a topnotch pair in Bill Dudley and Curt Sandig. Either one is liable to break up the old ball game at any moment.”

Doyle did have a fumble recovery that helped the Steelers defeat the Chicago Cardinals in a November 22, 1942 game.

Following that first winning season, the Steelers lost so many players they had to combine with the Eagles to continue playing. On the other hand, the Cleveland Rams suspended operations. This was the situation when Doyle wrote his letter to Bert Bell. He would play with the Steagles in 1943 and then the Carpits in 1944 all while working to support the war effort. In 1945, Doyle had what may have been his best season. He started all ten games. Ted Doyle also returned an interception 49 yards to help upset the champion New York Giants and contribute to the Steelers first win of the season. It was his first ever score in college or professional ball.

I could not find a reason he didn’t return to the Steelers in 1946. He did continue playing semiprofessional football and baseball in the Pittsburgh area for a couple of years. I surmise that when Art Rooney hired Jock Sutherland to coach the Steelers in 1946, Jock decided on a new direction. Doyle helped start the South Hills Boys Club. By 1950, he and his family had moved back to his native Nebraska where he opened a bowling alley and continued with his life’s work.

In his eight seasons with Pittsburgh he played under seven different head coaches if you count the co-head coaches Greasy Neale and Phil Handler. Ted Doyle’s obituary mentions that his work during the war involved the Manhattan Project, developing the first nuclear bombs, which is fascinating. He passed away in Nebraska on October 6, 2006 aged 92. Sadly, I did not find a mention of his passing in Pittsburgh newspaper archives of the time.

Today, it is a rarity for an NFL player to serve in the military. Players like Alejandro Villanueva or Pat Tillman (RIP) are regarded as unique. But, according to a Task & Purpose article by Sarah Sicard at least seven NFL players have served since the 9/11 attacks in 2001. A March 9,1943 Pittsburgh Post-Gazette article reported that 125 of 350 NFL players were in the military just three months after completing the 1942 season.

Though many of those players voluntarily enlisted into the military, many others were drafted. Today, we have an all-volunteer military. I’m not suggesting that these earlier players were better men nor that today’s players are selfish. There are many ways to give back to our society.

Many current & former NFL players have established foundations to make grants to charitable causes. Here are a few examples:

Best of the Batch Foundation

There are many more.

For me, it is just an interesting contrast between the players of today and the players of yesteryear. If there are any other former Steelers you want me to write about, just leave a comment below.

In the 2018 Memorial Day Weekend: Steelers Friday Night Five Questions, I committed to play songs that Steelers Depot respondents had suggested might be the new Steelers anthem if Renegade by Styx was ever replaced. Here is entry 22 of 45 from Jeremy: No More Mr. Nice Guy by Alice Cooper.