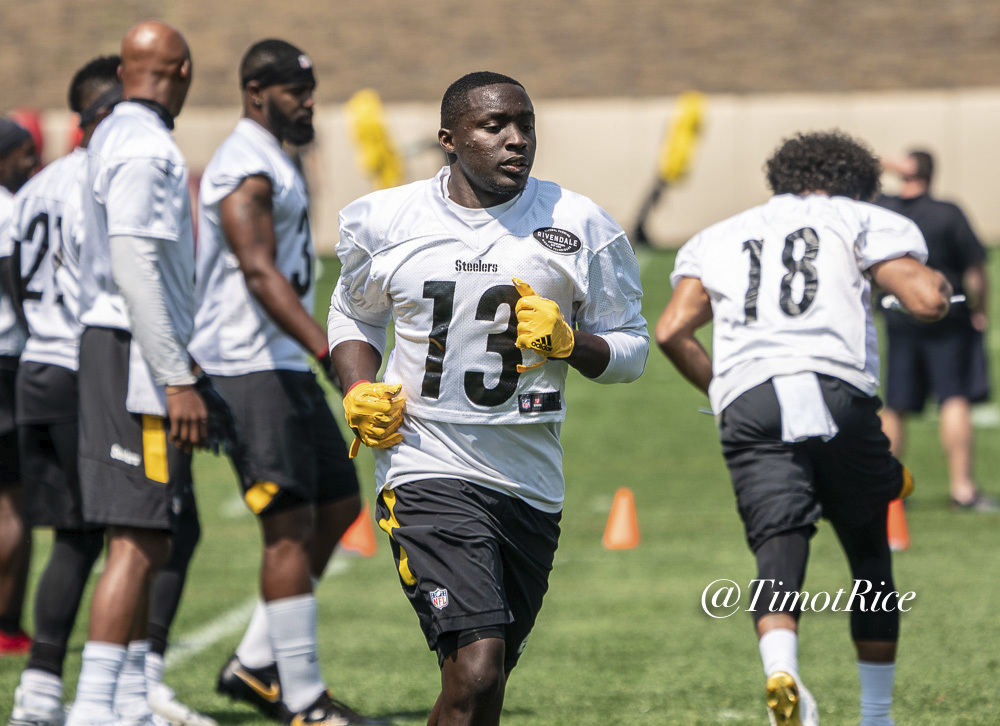 Here are their updated passing stats through the final preseason game (stats via CBS Sports):

Here is a quick synopsis of how each listed quarterback did during the past two preseason games:

Mason Rudolph played the entire 2nd half of the Titans game. While he showed good pocket presence; he may have become tentative with his passing preferring short passes rather than going downfield. This increased his completion percentage but decreased his yards per completion significantly. In the final preseason game, Tomlin brought him in for a two-minute drill at the end of the first half. He completed a 24-yard touchdown and then scored himself on the two-point conversion. No turnovers but Rudolph did bobble a snap resulting in a sack. Nice dilemma for the Steelers both quarterbacks looked good in the finale.

Baker Mayfield got to play with the first team when Tyrod Taylor had to leave the game after hurting his wrist in a fall. He did throw his first interception later in the game but overall, was throwing well against Philadelphia’s defense. He was 8 of 12 for 76 yards. Mayfield played the first half versus the Detroit Lions. It appears that he will be the back-up to Tyrod once the season starts but will become the starter this year at some point.

Sam Darnold started his second game in a row. He was 8 of 16 for 86 yards and passed for his second touchdown. The New York Jets traded Teddy Bridgewater and did not play Darnold in the final preseason game. Perhaps, Todd Bowles was reserving him to start in the Jets opener against the Detroit.

Josh Allen started the game for the Buffalo Bills but was removed just before the first half ended to be evaluated for a concussion. Although, he was cleared to return to play, the Bills stuck with Nate Peterman as Allen had already been sacked 5 times. Josh did not play in the final preseason game as AJ McCarron went the distance. McCarron was sacked 5 times. Allen may have a tough time if he plays and the Bills don’t shore up that offensive line.

Josh Rosen jammed his thumb on a helmet during practice so did not play against the Dallas Cowboys or the Denver Broncos. Not much information to compare. He will be Sam Bradford’s back-up during the regular season so unlikely to see him play much unless there is an injury.

Lamar Jackson came into the game versus the Miami Dolphins to start the 2nd half. He had an impressive outing, completing 7 of 10 passes for 98 yards and a TD pass. He also tacked on a rushing TD with 3 runs for 39 yards. John Harbaugh felt Jackson “handled himself well.” In his final preseason appearance Lamar completed 9 of 15 passes which puts him at an even 50% completion rate. Not good but improving.

The initial rookie wide receivers tale of the tape listed the first two preseason game statistics of seven rookie receivers selected high in the 2018 draft plus the Pittsburgh Steelers 2nd round pick James Washington. The Dallas Cowboys 3rd round pick Michael Gallup was added to the tracking spreadsheet per the request of Steelers Depot reader The Tony.

Here are their updated passing stats through the final preseason game (stats via CBS Sports):

Here is a quick synopsis of how each listed receiver did this past weekend:

DJ Moore was shutout versus the New England Patriots. He was targeted 3 times but had no receptions. Moore did not catch a ball in the third game in a row against Pittsburgh but not sure how many snaps he played. The Carolina quarterbacks threw the ball 55 times, but Moore was only targeted once. Not a good start to a career for the Panther who was the first receiver picked in the draft.

Calvin Ridley had an opportunity with Julio Jones out but only had one catch for 12 yards against the Jacksonville Jaguars. He did not appear in the preseason finale.

Courtland Sutton was overshadowed by former Steeler Emmanuel Sanders versus the Washington Redskins, but he did manage 3 catches for 45 yards for his best performance of the preseason. He did not appear in the preseason finale.

Dante Pettis did not produce much against the Indianapolis Colts. Just one catch for 8 yards. He did not appear in the preseason finale.

Christian Kirk had a forgettable day. He had two catches for a total of 1 yard against the Dallas Cowboys. The Arizona Cardinals also had him returning punts, but he only had 1 return for -4 yards and several free catches. He did not appear in the preseason finale.

Anthony Miller did not play versus the Kansas City Chiefs or Buffalo Bills. According to a Kevin Fishbain of The Athletic Chicago, he was a healthy scratch and held out along with most of the other starters.

James Washington had only two “targets.” Ben Roethlisberger overthrew him by a mile. He also tweaked an oblique muscle in the Tennessee Titans game. Not a good day for the commander in chief. He did not appear in the preseason finale against the Carolina Panthers.

DJ Chark missed his only target of the day. However, his profile may increase due to the injury to Marqise Lee who led the Jaguars in receiving last year. He did not appear in the preseason finale.

Michael Gallup did not catch the two passes thrown his way and had goose eggs on his stat line versus the Arizona Cardinals. Of course, the entire Dallas Cowboys offense looked pathetic against the Cardinals. Gallup added 4 receptions and 29 receiving yards against the Houston Texans but both teams rested most of their starters.

It’s interesting that 7 of the 9 listed wide receivers did not appear in the final preseason game. Could their coaches be hiding them for big opening days?

The initial rookie safeties tale of the tape listed the 1st two preseason game statistics of five rookie safeties selected high in the 2018 draft plus the Pittsburgh Steelers first round pick Terrell Edmunds. The Baltimore Ravens 6th round pick DeShon Elliott was added to the tracking spreadsheet per the request of Steelers Depot reader Chad Weiss.

Here are their updated defensive stats through the final preseason game (stats via CBS Sports):

Here is a quick synopsis of how each listed safety did this past weekend:

Minkah Fitzpatrick has picked up snaps in the slot as the Miami Dolphins move secondary players around. He had two tackles in the Ravens game, and folks seem impressed with his readiness to play in the NFL. Miami fans think Minkah is a Defensive Rookie of the Year candidate. We will see once the real games begin. Minkah did not play in the preseason finale.

Derwin James intercepted a Drew Brees pass in his 1st start as an NFL player… not bad for a rookie. Los Angeles Chargers fans are incredibly happy with this draft pick. Chargers fans believe their safety could be Defensive Rookie of the Year. Derwin did not play in the preseason finale.

Terrell Edmunds got his first interception against the Tennessee Titans and showed some savvy & speed by getting right up and running down the field for extra yardage. He started at strong safety for Morgan Burnett and fit right in. Terrell did play briefly in the preseason finale and recorded a tackle. Pittsburgh fans of course know that he is a definitive candidate for Defensive Rookie of the Year.

Jessie Bates III only collected an assist as the Cincinnati Bengals sacked Buffalo Bills quarterbacks six times. Bates did not play in the preseason finale.

Justin Reid had a quiet game for the Houston Texans in a narrow loss to the Los Angeles Rams. If he is not a starter at the beginning of the regular season he is still slated to get a lot of snaps. Reid then lit up the Cowboys with a pick 6.

Ronnie Harrison did not play for the Jacksonville Jaguars in the pat two games due to a hamstring injury that has kept him from some practices. We’ll see if he plays in the regular season opener.

DeShon Elliott fractured his forearm while covering a kickoff for the Baltimore Ravens. His season may already be over, we should learn more this week (Ed Note: Elliott has been placed on IR).

In the 2018 Memorial Day Weekend: Steelers Friday Night Five Questions, I committed to play songs that Steelers Depot respondents had suggested might be the new Steelers anthem if Renegade by Styx was ever replaced. Here is entry 15 of 45 from Chris Poknis: Sabotage by Beastie Boys.