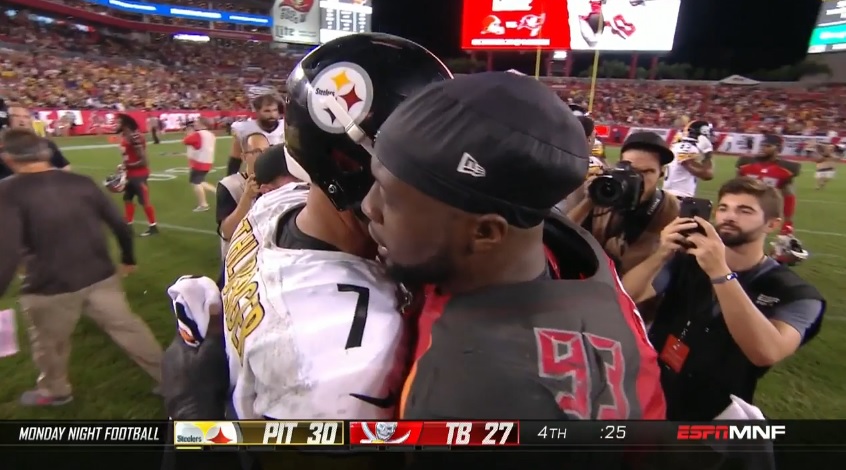 I woke up with a Pittsburgh Steelers hangover today. Steelers fans were elated at the end of the first half. The offense was scoring points. The defense was forcing turnovers and scoring points too. Special teams captain Chris Boswell kicked a field goal and was making extra points after an early doink.

The Steelers needed to win this game. The Black & Gold almost let the Tampa Bay Buccaneers and Ryan “Magic” Fitzpatrick steal the show. By the end of the game, I was more relieved than happy. I needed to sleep on this one before giving my perspective on this schizophrenic display.

Mike Tomlin described scripting plays during one of his interviews prior to the game. I was looking forward to a fast start with some high percentage plays to get the offense in gear. Instead, the Steelers great offense opened the game with yet another three and out. Ben Roethlisberger then threw an interception on their second possession. Tampa Bay converted Ben’s gift into seven points.

The 3rd drive didn’t look promising. Tampa’s defense dropped James Conner for a four-yard loss. On a 3rd and 10 play, Vance McDonald was inexplicably wide open. Not only did he catch the ball for a first down, McDonald abused a Tampa defender and trucked for a 75-yard touchdown.

That play seemed to wake up the offense. Pittsburgh scored a field goal and another touchdown on the next two drives. Then the defense stopped two straight Tampa drives with interceptions. The Steelers offense responded with two drives that ended with punts – the only first down the result of a penalty. The offense looked disjointed and confused until the final drive to end the half. It was what I’ve been expecting all season. A one minute, nine second drive, Ben completing passes to five different Steelers receivers. The drive capped by Ryan Switzer catching the touchdown pass.

Pittsburgh led 30-10 and another half to play. Unfortunately, Randy Fichtner and the offense appeared to have stopped for the day. Pittsburgh’s first offense series looked promising when they took their first timeout. Plenty of time to call a play to get a first down while facing 3rd and three on Tampa’s 27-yard line. Instead, Jason Pierre-Paul strip sacks Ben. B.J. Finney prevents a turnover by recovering the fumble.

The next two drives ended with punts. Thankfully, the final drive had two key first downs. JuJu Smith-Schuster caught a pass for 18 yards forcing Tampa to burn their final timeout. Then Conner ran for 17 yards to set up my favorite Pittsburgh offensive play. Three straight kneel downs from the victory formation.

Eight of Pittsburgh’s 12 possessions were in the first half as was all their scoring. Yoi.

A lot of folks are still unhappy with the defense. Fitzpatrick passed for over 400 yards again. Tampa Bay scored 27 points and gave Steelers fans reason for concern until the final drive of the game. Yes, defensive backs didn’t get their heads around to see the jump balls Fitzpatrick was lofting to receivers who were falling on the ground with the ball landing in their laps.

However, this defense created four turnovers. Artie Burns stuck a tackle and forced a fumble… Artie Burns! Bud Dupree found the end zone with his interception. After all, the Steelers offense did nothing with the two other interceptions the defense handed them. Terrell Edmunds returned his first career interception 35 yards and the offense still could not score.

Jon Bostic was all over the place. Keith Butler opted to blitz more often and get defenders into the quarterback’s face. The defense allowed an exceptionally long drive to open the second half but importantly, held the Buccaneers to a field goal after a nice pass defense by Sean Davis. Joe Haden also played some nice pass defense. Not sure what will happen at the other cornerback position. Burns, Coty Sensabaugh or Cam Sutton need to step into the breach. The defense also forced Tampa to go three and out on their last possession giving the ball back to the offense to close out the game.

I’d like to see this same pressure on Joe Flacco Sunday night.

Is it time to worry yet? Chris Boswell missed another extra point and a field goal. The coverage unit allowed an 83-yard return that referees negated with a holding call. Six of Pittsburgh’s thirteen penalties were on special teams plays. Jordan Dangerfield held on the game’s opening kickoff to erase Switzer’s 31-yard return. Referees called unnecessary roughness on Dan McCullers and Cam Heyward on separate Tampa Bay extra-point kicks. Nat Berhe grabbed a facemask to extend a Tampa Bay kickoff return to the 30-yard line. I guess everyone still sees Jordan Berry as the problem on special teams. I don’t think it would be wise to make a midseason change; plenty of other issues to clean-up on special teams first. Danny Smith has some work to do.

Most of the calls were legitimate to me. However, a couple of the roughing calls on Roethlisberger and Fitzpatrick were bogus and undermine the integrity of what is supposed to be a full contact sport. The officiating resulted in a Tampa Bay receiver almost scoring a 50+ yard touchdown after falling to the ground. Replay showed a touch causing him to be down, but clearly the defenders avoided jumping on the receiver on the ground because of all the flags that were flying around.

There were 140 plays from scrimmage, plus 32 special team plays in the game. The referees called 22 total penalties on an average of 12.8% of the plays – though in the case of Darrius Heyward-Bey he managed two flags on the same play. A lot of these flags needed lengthy discussion amongst the officials. How fun is it to watch a meeting when you can’t take part?

The NFL needs to fix this soon. In the meantime, here is a training film for defenders. Note how the demonstrators control their movements to avoid applying their full weight while executing dynamic moves.

Here is what I gleaned from the Steelers Depot Live Update and Discussion Threads:

The “best” of the 1,366 comments in the 1st Half thread included  Intense Camel voicing a lot of our views “Refs are killing the game.”  Chris92021 replied, “Goodell and the owners are killing it. The refs are just doing their bidding.” Rob S observed “Too bad (Jordan) Berry wasn’t able to think fast enough. You see an offside on a 4th and 6 punt try and pick it up.” While Nathanael Dory noted “Road Ben is awesome right now.”

1,041 comments in the 2nd Half Thread. Canadiana “Still can’t believe what a pickup (Mike) Hilton was.” However, SkoolHouseRoxx marveled about another defender. “I’ve been saying for a while if Alvin (Bud Dupree) just realizes where the qb is and cut back he will double his sack count.” Arthur Branch “Love(d) that Connors has 2 hands on the ball.” While 695hoops appreciated the defense’s last stand. “Defense did their job. Now close the game out!”

Okay. The Steelers won but … there is still concern on both sides of the ball. In with the good, out with the bad. And the Black & Gold will make the Baltimore Ravens incredibly sad this coming Sunday night.

In the 2018 Memorial Day Weekend: Steelers Friday Night Five Questions, I committed to play songs that Steelers Depot respondents had suggested might be the new Steelers anthem if Renegade by Styx was ever replaced. Here is entry 23 of 45 from Jason Campbell: New Level from Pantera’s Vulgar Display of Power album.