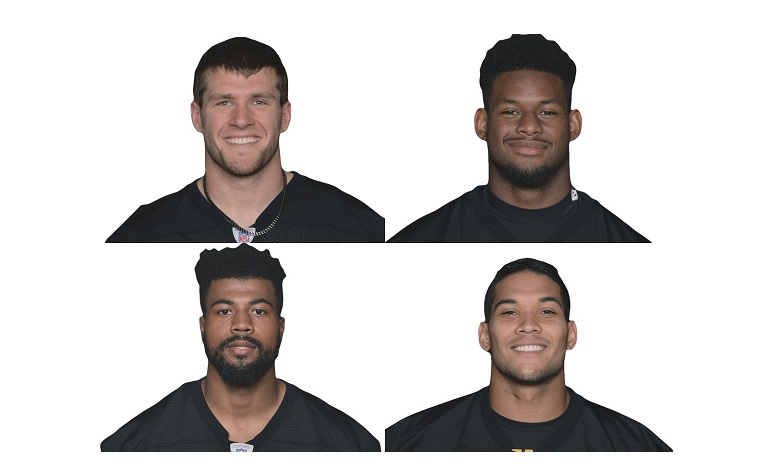 The Pittsburgh Steelers may have not started their 2018 season off with a home run but their draft class from 2017 has definitely hit one out of the park with their contributions. Many teams would be ecstatic with one player from their respective draft class becoming a key contributor, maybe two players if they are lucky. The Steelers do not have just one or two key contributors from their 2017 draft class – they have four.

Draft classes usually take up to a handful of years to gauge their production but just a year and a week in, it is looking like with the selections of T.J. Watt, JuJu Smith-Schuster, James Conner and Cameron Sutton, general manager Kevin Colbert has hit a grand slam with his 2017 draft class.

Watt is the name in everyone’s mouth, almost single handily ensuring that the Steelers escaped Cleveland with a tie rather than a loss. Picked for his raw upside and athleticism, Watt flashed that on Sunday, finishing with four sacks and blocking the Browns’ 42-yard field goal in overtime. The outside linebacker has leap frogged in front of his entire draft class as his 11 career sacks ranks first out of his draft mates. The younger of the Watt brothers, T.J.’s 11 sacks ranks higher than number one overall pick Myles Garrett (9), Carl Lawson (8.5) and Takkarist McKinley (7).

Do not let Smith-Schuster’s dance moves and high energy distract you from the fact that the kid can play at a high level on the gridiron. His 119 receiving yards Sunday led the team and put the talented receiver over 1000 yards for his career. The youngest player of his draft class, Smith-Schuster is the most seasoned on the field, becoming the first player of his draft class to surpass 1000 career receiving yards. Spending a second-round pick on the former USC receiver has been more than a steal, it was an outright robbery, as the receivers drafted in the first round (John Ross, Mike Williams and Corey Davis) have only put up 616 receiving yards combined.

The man of the hour, running back James Conner, has had his first career started covered from start to bottom. A feel-good draft pick as a former Pittsburgh Panther, Conner has turned into a feel-good player on the field as well. For months, pundits and media asked, “How will the Steelers replace the duties of Le’Veon Bell should he hold out?” The Steelers have known the answer this entire time and they unveiled it to the world on Sunday as Conner broke out for 192 yards from scrimmage and two touchdowns. Conner showed excellent vision and pass catching abilities as he silenced his critics for at least one more week.

Perhaps the unlikeliest name on this list, Sutton was figured to be a year or so away from any real starting action. That changed with Joe Haden missing some of Sunday’s action and possibly more with a hamstring injury, resulting in Sutton being thrown into the lineup. Sutton stumbled quickly, being on the receiving end of a terrific touchdown grab by Browns’ receiver Josh Gordon but redeemed himself when it mattered most. With the Browns driving for a potential late field goal, Sutton was not fooled twice, intercepting a Tyrod Taylor pass in Steelers’ territory and ensuring overtime. A player with the ability to fill in and play up to standard, Sutton is and will be the swiss army knife of the team’s secondary.

No one would have guessed that the Steelers would see this amount of contribution from their 2017 draft class, especially this fast. Just one game removed from their rookie seasons, the four prospects have shown incredible maturity and look to not just compliment the Steelers’ 2018 success but power it.