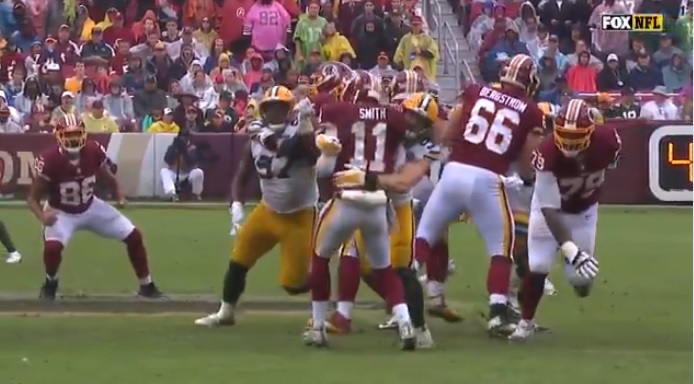 In the NFL’s interest of player safety, especially those precious quarterbacks, the league has made it next to impossible for defenders to legally hit and sack the QB.

Clay Matthews has found that out the hard way. Not once. Twice. But today marked the third time this season he’s been called for roughing the passer for putting his body weight into the QB.

#Packers Clay Matthews now has 3 weeks in a row with roughing the passer called against him.pic.twitter.com/LSfPmHKMW3

An NFL new rule/rule of emphasis was to outlaw defenders putting “all of most” of their body weight directly on the QB. It’s one of the most often calls as far as “new” rules go, far and beyond the issue of lowering the helmet penalties, which the NFL tweaked and seemed to fix in the preseason.

The NFL, in a rare move, immediately came out to defend the ruling on the Matthews’ penalty, saying that by the rule, it was a penalty.

This is a foul for roughing the passer – the defender lands “with all or most of the defender’s weight” on the passer. Rule 12, Section 2, Article 9(b): https://t.co/s9YKN8NLuT #GBvsWAS pic.twitter.com/ei2QZkvvzx

Outside of league offices, these calls have been universally criticized. Even quarterbacks, current and former, seem to have no explanation for why these hits have been outlawed. Former NFL VP of Officiating Mike Pereira, now an analyst for FOX, agreed that defenders have no good way to take down the quarterback anymore. When players are in the air and have very little control over their momentum, these types of plays are almost unavoidable.

Making contact with the QB was tough enough as it was. Can’t go below the knee, can’t make contact with the helmet, can’t wait too long after the ball is released. Now, you can’t hit him too hard either.

It seems like a simple fix could change things. Though the NFL won’t outright admit it, they made the “lowering the helmet” calls more subjective and gave the officials more leeway, only throwing the flag for avoidable, blatant hits. Those plays still get called but at a reasonable, logical rate.

The same can be done here. Make it more subjective and only throw the flag for hits where it’s possible for the defender to roll away or at the least, remove the “most” clause in the rules. Make it so the flag can only be thrown if “all” a defender’s body weight lands on the QB. That at least gives the defenders an “out” and the ref a more objective frame of reference.

We’re all for player safety. But not without ruining the game.