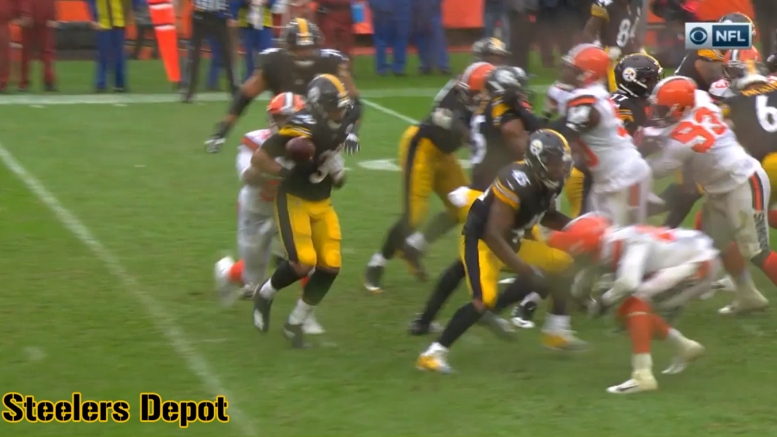 The Cleveland Browns don’t often make the smart decision when it comes to their personnel choices, but they did last year when they chose to pull the trigger on edge defender Myles Garrett with the first-overall pick in the 2017 NFL Draft. Or at least, it was a very good choice.

While he struggled with injuries to start out his rookie season, Garrett came on strong once he got on the field and registered seven sacks in just 11 games, with nine starts, which was tied for the most among rookies with T.J .Watt.

On Sunday, he played every snap of the game against the Pittsburgh Steelers while registering two sacks, forcing two fumbles—and nearly forcing another—and six tackles, along with a batted pass that was nearly intercepted by one of his teammates. He was a game-wrecker who largely had his way with left tackle Alejandro Villanueva throughout the day.

“I am being the person they got from the draft”, Garrett told reporters after the game when he was asked about what went into his performance, and reminding them that he played through a high ankle sprain as a rookie. “I am finally healthy, and I am just trying to be the guy to make the plays when we need them”.

His plays were certainly timely. Both of his forced fumbles came in the fourth quarter with the Browns trailing. First he forced second-year running back James Conner to fumble, beating Villanueva and punching the ball out from behind, inside the Steelers’ 20. The Browns returned it to the one and scored on the next play. then Garrett sacked Ben Roethlisberger and knocked the ball loose, Cleveland again recovering.

He certainly looks as though he is going to be a player that will be a problem for the Steelers for a long time to come. It’s still early in his career—this was just his 12th NFL game, and 10th start—but he appears to have the makings of not just an elite talent, but an elite player. The kind that makes the All-Pro list regularly, and maybe even Defensive Player of the Year.

That’s not to oversell one performance, but I fully expect that he is going to continue to play at a high-impact level, similar to the J.J. Watts and Von Millers and Khalil Macks of the NFL. I would rather not have those players in the Steelers’ division.

But hey, maybe if the Browns actually start winning some games, they won’t always have the opportunity to draft the generational talents that fall into their laps at the top of the draft—at least in the rare instances that they actually pull the trigger on them.