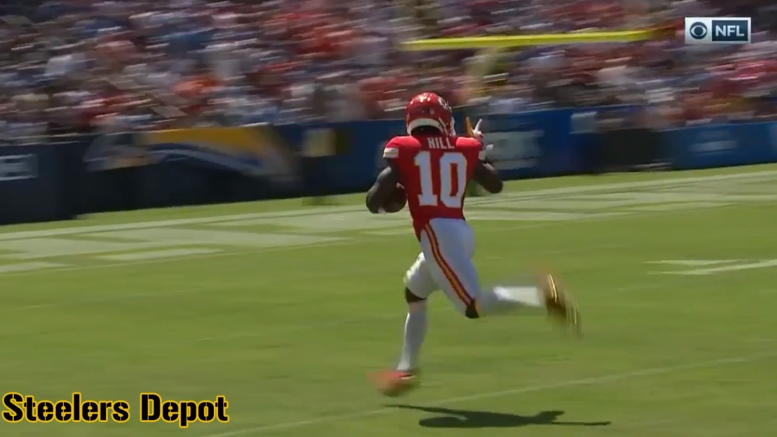 Third-year Kansas City Chiefs wide receiver Tyreek Hill has grown every season, and if his season-opening performance is any indication, then he is really going to be a challenge for defenses, provided that Patrick Mahomes can continue to get him the ball. He caught seven passes for 169 yards and two touchdowns, adding a 91-yard punt return on top of that for a third score.

Hill is the sort of return man that can help remind the special teams nay-sayers that it’s important to carry players on your roster who excel in that area of the game. Tyler Matakevich, by the way, recorded two tackles on Hill on punt returns in their match-up a year ago.

But the Steelers’ primary concern must be what he is capable of doing against them on the offensive side of the ball. Head Coach Mike Tomlin called him “a unique talent” during his pre-game press conference, saying that “you see continued growth as a wide receiver in the way that they utilize him in the offense”.

And that’s not by chance. Mahomes told the Chiefs’ website that Hill “had really worked on his route running and everything in order to make him one of the best receivers in the league” during the offseason this year, citing the season-opener as proof “that he’s improved in that part”.

Tomlin admitted yesterday that he has become Kansas City’s “chief receiving threat”, though I can’t confirm whether or not he was aware of the pun he made, let alone if it was intentional.

Sunday’s game will be a much different test in the passing game, working against a young, big-armed quarterback such as Mahomes willing to release the ball, rather than going up against Tyrod Taylor, who prefers a conservative approach to throwing the ball, and who struggled with his ball placement, completing just 15 of his 40 pass attempts.

It will be an even greater challenge if the Steelers have to field a defense that does not include Joe Haden, arguably their top cornerback. He suffered what has subsequently been described as a minor hamstring injury, but Tomlin said that his availability for Sunday’s game will be dictated by his ability to participate in practice.

Should Haden fail to play, the Steelers might consider matching Artie Burns against Hill and following him across the field, provided that they feel comfortable with Cameron Sutton’s ability to play on both sides of the field—which I believe they are.

Of course Hill isn’t the only player Pittsburgh has to worry about. Sammy Watkins is capable of being a major challenge, though he had just three receptions for 21 yards in his Chiefs debut. Tight end Travic Kelce is a Pro Bowl performer at his position.