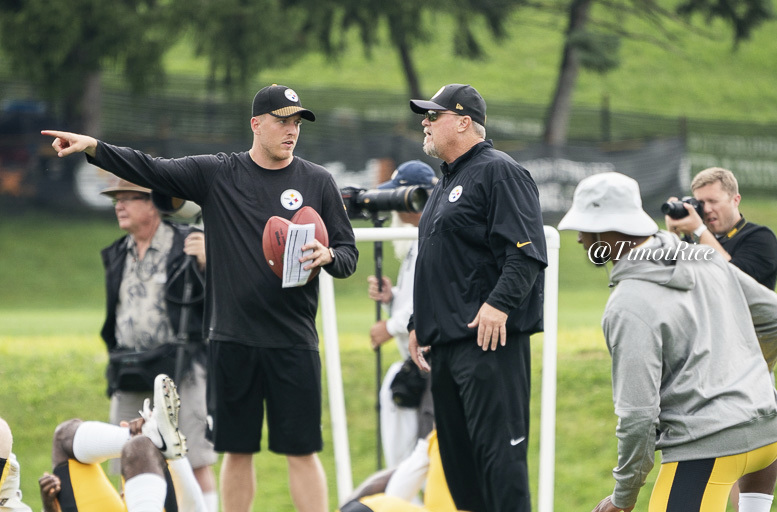 Much of the focus and turnover for the Pittsburgh Steelers has been on the defensive side of the football. Finding Ryan Shazier’s replacement, the changes in the secondary, a new defensive line and secondary coach.

But there are some questions offensively too. Partly, around the new playcaller for the Steelers, Randy Fichtner. It’s his first time calling plays at the NFL level, his first time doing it at all since 2006 at Memphis, all while pulling double-duty as the QBs coach in a very young room.

Appearing on First Take Tuesday morning, Mike Tomlin was asked by Stephen A. Smith if he was worried about Fichtner’s inexperience. Tomlin offered an amusing reply.

“Randy’s been in Pittsburgh, PA going on 12 years now,” Tomlin answered. “He’s coached wide receivers within the framework of the organization, quarterbacks, and now coordinators. He hasn’t been delivering pizza.”

Expanding on that, Tomlin said he was excited to see what Fichtner could do.

“This guy is more than prepared. I’m excited about what he’s going to bring. As is Ben. Their partnership and relationship and manner in which its grown. The number of hats that Randy has worn within our structure I think is going to be nothing but a benefit to him. I’m sure he’s excited about the opportunity to call plays again.”

While it’s a question coming from *sigh* Stephen A, it’s a concern that has merit. Fichtner will be under the microscope for the first time of his career, juggling plenty of responsibility and the man in charge of keeping the offense potent while improving its consistency. There’s every reason to expect this is, at worst, a top five offense, and the side of the ball that will win most of the games. If that fails, blame will quickly shift towards the OC, as it usually does in Pittsburgh, for better or worse.

Roethlisberger, obviously, has talked Fichtner up all season long. That’s his “guy” and should help smooth over the transition. Fichtner isn’t handing the keys over to #7 but Roethlisberger is expected to have more freedom than under Todd Haley. That’s not to say that Haley controlled Roethlisberger, he didn’t, but Pittsburgh is expected to run more no-huddle this year, which naturally lends itself to the quarterback calling more plays.

Catch the entire interview below.