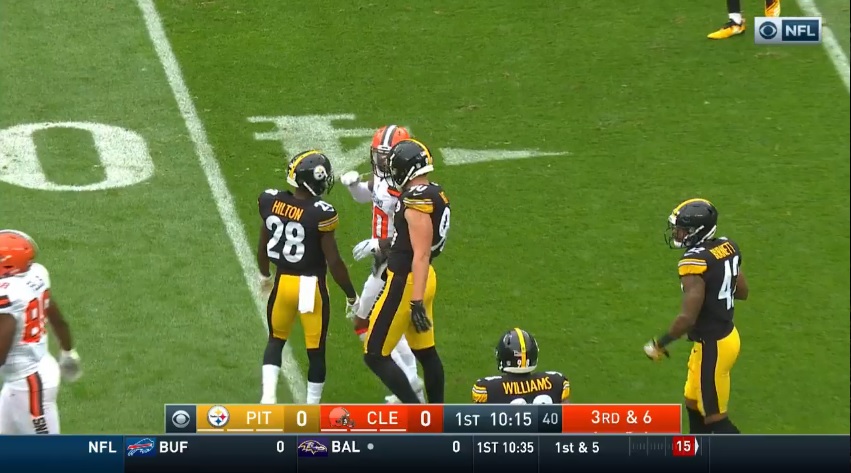 You can’t say the same about the offense but the Pittsburgh Steelers defense, universally assume to be the weak link heading into 2018, was the better unit in Sunday’s tie against the Cleveland Browns. They racked up seven sacks, allowed only a touchdown off six turnovers, and didn’t let the ball get behind them.

Speaking with Steelers.com’s Missi Matthews, cornerback Mike Hilton said he was pleased with how the defense debuted.

Still, Hilton said he understood it wasn’t a perfect game. And Pittsburgh will be facing a tough test next week when they host Kansas City, who put up video game numbers in their win over Los Angeles.

“We know there’s a lot of different things we can work on. We just gotta get prepared for KC next week at home.”

One issue the defense did have, though not fault of the secondary, was keeping Tyrod Taylor contained in the pocket. That mission only heightens Sunday when the Steelers face Patrick Mahomes, a QB with great mobility but the arm to make defenses pay, unlike Taylor.

Mahomes threw for 256 yards on just 15 completions and a whopping four touchdowns against a hapless Chargers secondary. Tyreek Hill was his prime target, hauling in seven passes for 169 and two scores. But the offense showed its creativity and multiplicity, hitting fullback Anthony Sherman on a wheel route for a 36 yard score.

Point is, while the Steelers defense passed the test Week One, they face a much tougher task this week. And the offense must certainly turn things around or run the risk of going winless the first two games of the year.